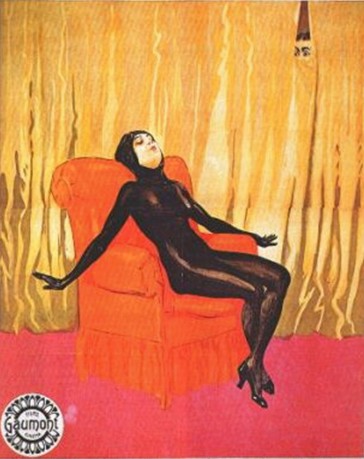 Warning! As with Zombies of the Stratosphere and Zorro’s Black Whip, the film serial Les Vampires may not contain any actual vampires.

Basic Story Line
A young reporter’s life is in danger as he investigates a ruthless gang of criminals known as “Les Vampires”.

Les Vampires is a silent, French serial, and one of the first ever made. For these reasons it is unlike any serial I have seen.

The title of famed serial director William Witney’s biography is In a Door, Into a Fight, Out a Door, Into a Chase. That pretty much sums up what most American serials from the 1930s and 40s are: one action scene after another with little concern for plot or characters. Think of them as episodic Michael Bay movies (Yes, that’s right Michael Bay. I have once again put you down in front of my 50 or so readers. What are you and your numerous multimillion dollar blockbuster movies gonna do about it?) Les Vampires is not like that. Although there are some pretty cool action sequences for the time, Les Vampires focuses on the story. It uses humour, suspense, and some pretty cool plot twists to keep the attention of its audience.

Because film serials in 1915 were new they hadn’t yet formalized the art form, there are ten long chapters in Les Vampires that average around 40 minutes apiece as opposed to the 12-15 20-minute chapters that become standard for serials. The big difference is that the chapters in this serial don’t end with cliff hangers. In Les Vampires, each chapter neatly wraps up that week’s adventure. This affects how the serial starts the next chapter. Later serials start with a recap of the action, re-introduce the main characters and show you the last two minutes of the previous week’s adventure. Here they give you a very brief description of what the story is and start the new adventure like a new chapter in a book, often days or even weeks after the previous chapter ended.

I’m sorry to say there is one thing that this serial has in common with later serials. As with most serials, Les Vampires starts off strongly but gets muddled around the half-way point. The serial begins like a gothic, supernatural thriller. A body is found with its head cut off. The severed head is later found in our hero’s bed room. A man and a woman are locked in a guarded room. When the door is opened again the woman is dead and the man has vanished, his clothing is in a pile on the floor. A man is murdered and later appears before his murder. All of these seemingly supernatural events have logical explanations, but they are creepy and cool. To add an extra layer of complication to the plot, there is a rival gang of criminals working against both the Vampires and our hero. However, around chapter five, things start to go over the top. The two rival gangs join forces. Top villains start to get killed off and are replaced at an alarming rate. Clever plot twists give way to over-the-top super villain devices, to the point where one villain fires a sci-fi looking cannon from his secret lair in the middle of Paris.

If you like serials and don’t mind silent movies I recommend Les Vampires, not just as a curiosity but because it is actually really good. Well, at least the first half is.

Things to watch for
-A ballerina dressed as a bat.
-Two of the coolest escapes ever. One while trapped inside a basket.
-The letters that spell “Irma Vep” on a poster, rearrange themselves to spell “Vampire”
-A film being shown in a film

The Back Row Weekly Serial Drinking Game
While watching a serial, anytime you or a friend point out a plot hole or inconsistency, take a drink. (Note: Considering the number of gunshots that go off in Phillip’s apartment I would consider the police not taking more of an interest to be drink-worthy.)
Odds of getting sloshed: Low to Medium