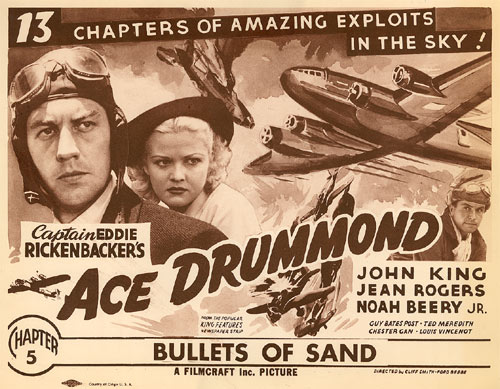 Basic Story Line
Flying G-Man Ace Drummond is sent into Mongolia to investigate a series of mysterious plane crashes caused by a terrorist known only as The Dragon.

Ace Drummond is a decent serial, with good characters, but also with more holes in the plot than a sieve.

The character of Ace Drummond original appeared in a comic strip written by First World War pilot Eddie Rickenbacker, in 1935. As a serial, Ace Drummond is an ambitious one. It is set in Asia, has a large number of background characters, extensive flying sequences, and several crashes. The serial also gained a certain amount of notoriety when famed aviator, Amelia Earhart, came to visit the set during shooting.

I would like to watch this serial with some Asian friends and have them point out what parts are wrong and what parts of this serial are actually offensive. I don’t think they set out to offend anyone. In fact they tried to be respectful. That, however, doesn’t change the obvious fact that they knew nothing about Mongolia. It’s as if the producers said, “We should set this in the most exotic location we can think of. How about Asia? But not China, that’s been overdone. We’ll set it in Mongolia.” They then proceeded to make Mongolia generically Asian. A few tell-tale signs suggesting a lack of research include; the number of crosses that are peppered throughout the Buddhist monastery, and the fact that they keep on sending water planes to an arid, landlocked country.

The Ace Drummond serial was directed by Ford Beebe, and Beebe knows how to handle characters. If you follow my column with any regularity you know that one of my pet peeves is the damsel in distress. If all your character is going to do is look pretty and need to be rescued, she might as well be replaced by a Barbie Doll. Jean Rogers, (Best known for playing Dale Arden in the first two Flash Gordon serials) is the love interest in this serial. Although she does occasionally need to be rescued, she thinks for herself and shows initiative. Some serials tack on a pointless comedic character to bumble his way through the chapters. (I’m looking at you, Undersea Kingdom) In Ace Drummond they have the comedic sidekick, but he shows courage and resourcefulness. In the end he is the one who breaks the villain’s power, by using The Dragon’s own weapons against him. All the characters serve the story in some way.

The identity of The Dragon is meant to be a mystery, and they do a good job at casting suspicion on various of characters. Unfortunately, when it is revealed that a character is not the villain, the writers don’t bother to explain the previous evidence against the character. There are other plot holes that develop do to sloppy mystery writing as well. Ace is attacked by two archaeologists when he goes to investigate a scream at their camp, yet later, when he meets them again, everyone acts like there was no kidnapped girl and shots were never fired. He continues to be on reasonable terms with them even after he finds another archaeologist locked in dungeon at their excavation site. Instead of having Ace arrest them, the writers leave these scientists there, so that they can continue to be suspects. Ace finds several of the villain’s hideouts but, inexplicably, The Dragon continues to use them unmolested. Another easily solvable problem this serial has is the cliff hangers. The writers rely far too heavily on the “Indestructible Man” resolution. How many plane crashes can Ace Drummond survive? One cliff hanger has him surviving a bomb being dropped on his car. The next chapter starts with Ace pulling himself out of a crater and dusting himself off.

As far as a 1930s serial goes, Ace Drummond is watchable. It will never be considered on the same level as Flash Gordon, Zorro, or The Green Hornet. But, if you’re not overly concerned about plot holes, and are looking for a serial with a mystery, biplanes, and a poor representation of Mongolia, I can safely recommend Ace Drummond.

Things to watch for
-The use and reuse of stock footage of biplanes
-Ace singing his own theme song
-Tires squealing on a dirt road
-Lon Chaney Jr. as a henchman
-Secret passageways in a Buddhist monastery
-The wreckage of Ace’s plane from the crash at the end of the second chapter is still at the monastery’s door in the seventh, but gone when they reuse the same crash footage at the end of the serial

The Back Row Weekly Serial Drinking Game
While watching a serial, anytime you or a friend point out a plot hole or inconsistency, take a drink. (Yes, Ace walking away from yet another plane crash without a scratch, is a plot hole. No, Ace singing his own theme song, is not.)
Odds of getting sloshed: High