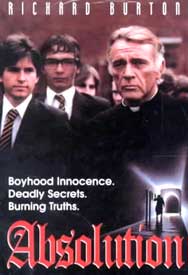 On my list of strange vices, I think you can rank 50-movie packs from Mill Creek Entertainment right near the very top. Mill Creek Entertainment is a video distribution company that releases DVD compilation box sets for movies and television shows at very cheap prices. Many of the old serials that Mat has covered in “The Back Row’s Weekly Serial Review” have been distributed on DVD by Mill Creek Entertainment. The reason they can afford to sell these sets at such a low price is because the copyrights for most of these movies have long expired and they have fallen into the public domain. And the reason they’ve fallen into the public domain is because… well, they’re terrible. Mill Creek loves to package a lot of their movies into genre-themed 50-packs, and I have to confess that I’ve purchased quite a few of them. And, yes, while the majority of these movies are terrible, you can’t really complain when these 50-packs cost less than $30, which means you’re essentially paying around 50 cents per movie. However, there’s an old expression that can be applied to these 50-packs: “Even a blind squirrel finds a nut once in awhile”. Sometimes, these packs will actually contain a real gem that completely exceeds your expectations and turns out to be a surprisingly good movie. Such was the case with a 1978 British thriller named Absolution, which was buried inside their “Drive-In Classics” pack even though it’s about as far from a drive-in movie as you can get. I sensed that any movie that began with Billy Connolly riding on a motorcycle to banjo music couldn’t be all that bad.

Absolution takes place at an all-boys Catholic boarding school in the English countryside. The story’s protagonist is a priest named Father Goddard (Richard Burton), who functions at the school’s Latin instructor and carries a stern, humourless demeanour that doesn’t exactly endear him to his students. Father Goddard is particularly disdainful of a nerdy, unpopular crippled student named Arthur Dyson (Dai Bradley), but his most prized pupil is the more popular and charismatic Benji Stanfield (Dominic Guard), whom Goddard hopes will become a priest someday. To Goddard’s disappointment, Benji befriends a likable drifter named Blakey (Billy Connolly), who is camped out in the woods surrounding the school, and Goddard orders his pupil to stay away from him. Benji is quite fed up with being the “teacher’s pet” and wants some form of retribution, so Blakey gives him an idea for a practical joke. Benji will make a confession to Father Goddard about engaging in sexual deviancy with Blakey, and since Goddard is bound by the confessional seal, he cannot inflict any consequences for it. However, things eventually take a much darker turn when Benji confesses that he has committed a murder. Of course, this causes a major dilemma Father Goddard, as he grapples with whether or not he should break the confessional seal, particularly once he believes that Benji is planning to murder someone else.
http://www.youtube.com/watch?v=y81YI1GLeUk
The storyline about a priest being forced to stay silent about a murder confession has been done before, most notably in Alfred Hitchcock’s I Confess, but in Absolution, nothing is as it seems. The film constantly leaves you guessing about whether there has been a murder, who may have committed it, or if the whole thing is just some elaborate practical joke. Even though it was hidden inside a Mill Creek 50-pack, I had a feeling that Absolution was going to be better than expected once I watched the opening credits and saw that the film was written by renowned playwright/screenwriter Anthony Shaffer. Shaffer is best known for writing the Tony Award-winning play, Sleuth, along with the excellent film adaptation of it, and he also penned the Alfred Hitchcock film, Frenzy, and the cult classic, The Wicker Man. Shaffer specializes in writing stories where he is always one step ahead of the audience, and the true motivations of the characters never become clear until the very end. Absolution has a deliberately paced first act that makes one think this is going to be a coming-of-age story, but it unexpectedly becomes a very tense mystery-thriller once the murder element enters the equation. Shaffer’s films usually build up to a twist ending and Absolution is no exception, and while the twist here may seem a little farfetched once you start thinking over the whole film, it still works pretty well and succeeds at shocking and surprising you.
http://www.youtube.com/watch?v=_gs5z4_fkwo
Richard Burton had just played a priest one year earlier in the disastrous Exorcist II: The Heretic, but he does much better this time around. When Burton first came across Shaffer’s script many years beforehand, he desperately wanted to play Father Goddard and pushed hard to get Absolution made, so he really sinks his teeth into the role. The film implies that Father Goddard may be a repressed homosexual, and it’s fun to see Burton showcase Goddard’s inner conflict between his disgust about Benji’s confessions and his potential excitement over the dirty secrets he might hear. After already making his name as a stand-up comedian, Absolution marked Billy Connolly’s film debut and he brings some much-needed levity and humour to the dark story. While Absolution is a very tense, intelligent and well-made thriller, I think there’s a reason it has been lumped together with a bunch of terrible movies in a 50-pack: nobody really seemed to have had much interest in it. The film opened to little fanfare in Britain in 1978 and did not get a release at all in North America for TEN YEARS, a full four years after Richard Burton had already passed away. All things considered, it’s not too surprising that Absolution lapsed into the public domain. If you don’t buy the Mill Creek 50-pack, you can still find the film in a $1 DVD bargain bin somewhere and the quality of all the DVD transfers is pretty terrible. Absolution is definitely acquired taste since it may prove too slow-moving for some viewers. However, fans of Richard Burton, Billy Connolly and Anthony Shaffer are advised to check the film out as it’s a very surprising and thought-provoking piece of work, and is the true definition of an underrated gem.