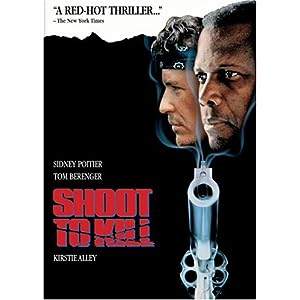 There are many things I miss about the 1980s and one of them is formula buddy pictures. Hell, given the preponderance of remakes and reboots that Hollywood is releasing today, I just miss formula action pictures in general. Sure, they were completely predictable and didn’t offer much in the way of surprises, but at least most of them were based on an honest-to-God original screenplay and knew what buttons to push to entertain their audience. I’ve shown my fondness for the action buddy genre with my “Robin’s Underrated Gems” columns for Midnight Run, The Last Boy Scout and Running Scared and now you can add Shoot to Kill to the list. Shoot to Kill perfectly follows the template of a 1980s formula action buddy picture, but it was somewhat elevated by the fact that Sidney Poitier decided to make a return to acting to star in this film after a ten-year absence from the big screen. His mismatched buddy in this story would be Tom Berenger, who was fresh off an Academy Award-nominated performance in Platoon. Shoot to Kill doesn’t break any new ground, but it tells its formulaic story very well and is quite an entertaining and exciting way to kill two hours, making one nostalgic for a time period when films like this were churned out seemingly every other week. I also found it hilarious when these formula action movies had the most generic titles possible. The title, Shoot to Kill, really doesn’t have anything to do with this film at all and I’m sure they only chose this title because it sounded cool when the late, great Don LaFontaine said it in the trailer. Man, I miss trailers like this!

Shoot to Kill opens in San Francisco where a mysterious extortionist has taken a local jewellery merchant’s wife hostage in order to force him to hand over a cache of diamonds from his store. The FBI soon gets involved and Agent Warren Stantin (Sidney Poitier) tries to negotiate a deal with the extortionist in order to save the woman’s life. However, the extortionist turns out to be a psychopathic killer and after Stantin turns the diamonds over to him, the killer shoots the woman through the eye and escapes the city. Stantin eventually tracks him down to Washington State, where it turns out the killer has murdered a tourist and has stolen his identity in order to infiltrate a group of hikers. This hiking party consists of five sportsmen (Clancy Brown, Richard Masur, Andrew Robinson, Frederick Coffin, Kevin Scannell) who have come to the area for a fishing trip and are being lead through the rugged wilderness by a local guide named Sarah (Kirstie Alley). Stantin believes that one of these men is the killer and is planning to use this expedition as a means to sneak across the border into Canada. Since Stantin will require his own guide to lead him through the wilderness in pursuit of the killer, he is directed to a local mountain man named Jonathan Knox (Tom Berenger), who just happens to be Sarah’s boyfriend. Of course, the two men do not like each other at first as Knox believes that the city-based FBI agent will not be able to handle the rugged terrain and only slow down his attempts to rescue his girlfriend. However, after a long trek together through the wilderness where they encounter numerous disasters that force them to save each other’s lives, Stantin and Knox eventually develop a bond and a mutual respect for one another.

While Shoot to Kill is a pure formula picture with few surprises, it’s underlying story idea is pretty neat. While it’s somewhat implausible that an FBI agent and a civilian would be allowed to chase after a dangerous killer through the wilderness all by themselves, the setting completely elevates the material. The film was shot in the forests of British Columbia and the photography and the locations are just gorgeous. Director Roger Spottiswoode (whose last name was the basis for a character in Team America: World Police) makes great use of his locations and delivers some pretty exciting setpieces, particularly a suspenseful sequence on a rope bridge over a giant chasm where Stantin has to save Knox for plunging to his death . The film builds a lot of suspense by cutting back and forth between the two heroes and the hiking party, and has a lot of fun trying to make you guess which hiker is the killer, particularly since most of them are played by actors who are known for portraying bad guys. If the narrative has a flaw, it’s the inexplicable decision to have the characters exit the wilderness a full 20 minutes before the film is over, with the climax taking place in downtown Vancouver. Since the wilderness setting is such an integral part of Shoot to Kill, you’d think they would want to resolve the story there, but thankfully, the climactic car chase and final shootout on a ferry are pretty exciting on their accord. However, the heart of the movie is the relationship between Stantin and Knox, and Sidney Poitier and Tom Berenger do have a lot of chemistry together. The story garners a lot of humour out of the conflicting personalities of the mismatched city slicker and mountain man, and Stantin’s uneasiness with his new environment provides quite a few laughs. The film’s most famous scene is probably this hilarious encounter with a grizzly bear, which I’m sure will be shown on Sidney Poitier’s career highlight reel after he passes away.

In the end, it is Sidney Poitier’s strong presence that holds the film together. Whenever a renowned A-list actor suddenly decides to make another movie after being away from the screen a really long time, it is assumed they must have taken on a very special project, but sadly, that often doesn’t turn out to be the case (witness Jane Fonda returning from a 15-year retirement to star in Monster-in-Law!). I’m sure some people may have been disappointed that Poitier decided to make his big return in a formula action picture, but the fact of the matter is that Shoot to Kill wouldn’t be nearly as effective without him. On paper, a lot of Stantin’s dialogue and speeches are actually pretty hackneyed and corny, but Poitier delivers his lines with such conviction that they somehow manage to work. It’s amazing to think that Poitier was already sixty years old when this film was made because he still looks like he’s in his forties, and you can actually believe that this sixty-year old man could survive such a dangerous trek through the mountains and pull off some pretty Herculean feats. As of this writing, it has now been almost fifteen years since Sidney Poitier last appeared on the big screen and I do hope that his last theatrical film does not turn out to be The Jackal. Overall, Shoot to Kill is one of those movies that makes me very nostalgic about the eighties. It’s a simple, unpretentious formula film that doesn’t try to reinvent the wheel, but only wants to deliver everything it promises to its audience and entertain you. While many formula action films from the eighties are still fondly remembered, Shoot to Kill is pretty much forgotten about today and is pretty underrated overall. However, it is well worth a watch for fans of the genre and anybody who has ever always wanted to see Sidney Poitier scare off a grizzly bear.