Posted on February 22, 2012 by curtisrunstedler 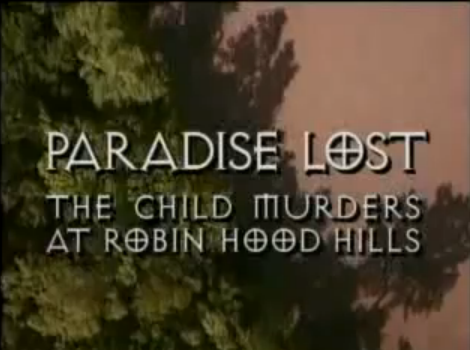 I recently read that the accused members of the crime featured in Paradise Lost: The Child Murders at Robin Hood Hills have all been recently released (that’s the subject of another documentary in the series called Paradise Lost 3: Purgatory), so I decided to check it out. The first in a series of three films to date, Paradise Lost: The Child Murders at Robin Hood Hills tells about the horrific murders of three little boys in early ’90s in West Memphis and the trial surrounding it. Basically, the three accused were subjected to the witch hunt tendencies of the small Bible belt community. Damien’s Wiccan practices are targetted as Satan worship, and the media hype surrounding the case doused greater flames onto the roaring fire. With recent DNA evidence, the trial was reopened and the three suspects were released from custody. Paradise Lost looks at the crime itself and the initial trials.

The documentary also thoroughly interviews members from all sides of the law and is the first documentary to feature Metallica. At two and a half hours in length, it has enough information for even the most casual viewer to grapple with the evidence and facts and come to their own conclusions about the case. That being said, some of the content is quite graphic. Autopsy and crime scene footage is shown, and some of the testimonies are a bit disturbing.

It’s fascinating to delve into the psyche of some of these characters. The purported ringleader of the crime, Damien Echols, defines the word psychopath, and while I neither think he is guilty of the crimes he is accused of nor is he involved with Satanism in any way (he strongly affirms that he is Wiccan throughout the film, although his audience seems more intent, in their understandable frustration and hurt, to label him as a Satanist), there’s something not quite right about him. He’s a bit of a shit, and I found the stoical attitudes of his friends a bit unnerving given the circumstances. I have my own theories for what happened. I think that the John Byer, who is the adoptive father of one of the children, killed them. He had a criminal record and his wife mysteriously died a few years after her son. Not only that, but he also gave a knife to the film crew containing the blood of his adoptive son. As well, his reactions during the course of the prosecution and questioning demand assessment. The story of Mr Bojangles is also quite compelling, and it’s disturbing to know that the police could “lose” evidence, especially when it could relate strongly to the case.

The film is indie in its budget, but it answers most of the questions I had and it’s a particularly gripping story and documentary. It’s horrifying enough that someone could do those things to the little ones, but it’s even more horrifying when the culprit is still out there and possibly killing again. I hope that someday that justice is served for those poor little boys who never had a chance to grow up and live their lives. Not for God’s sake, but for the sake of the little ones.