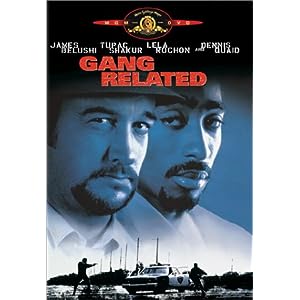 I know as much about the music of Tupac Shakur as I do about the music of Justin Bieber and Taylor Swift… which is to say, absolutely nothing! All I know is that it was sometimes very easy to forget that the guy was dead since it seemed like they were releasing new albums of his every year since he was murdered. However, I do know that Tupac had taken on a second career as an actor, and that he showcased a lot of talent and potential in his roles before he was murdered. While I have not seen any of his other films, such as Poetic Justice and Gridlock’d, I did check out his last feature film, Gang Related, which did not get released until a year after Shakur’s death and was heavily hyped as being his final screen role. On the surface, Gang Related seems like a pretty routine urban police thriller, and other than featuring Tupac Shakur’s final performance, there was nothing in the advertising that made this film stand out in any way. It came and went without much fanfare and is pretty much forgotten about today, but watching Gang Related, you may find yourself pleasantly surprised at how good it really is. This is not a film that cares much about capitalizing on Tupac’s real-life persona and allows him to disappear into his character. The writer-director, Jim Kouf, simply wants to tell a good story and he does so with a surprising amount of cleverness and ingenuity. As police procedurals go, Gang Related is actually quite unconventional as it’s not afraid to present protagonists who are incredibly corrupt individuals. They wind up creating a huge mess for themselves, but instead of rooting for them to get out of their predicament, most of the enjoyment comes from witnessing how badly things fall apart for them.

In most films where the protagonists are corrupt cops, the story will attempt to present them in the most sympathetic light possible and sometimes drive home the message that their actions serve the greater good. Gang Related instantly establishes that it has no such pretensions. The two main characters, Divinci (James Belushi) and Rodriguez (Tupac Shakur), are cops who are just plain crooked and greedy. Their scheme involves using Divinci’ s stripper mistress, Cynthia (Lela Rochon), as bait to lure drug dealers into a con job. Divinci and Rodriguez will sell the dealer cocaine that they have taken from the police evidence room, pocket the money, and then kill the drug dealer and return the cocaine before anyone discovers their set-up. The cops’ rationale is that the victims are scumbags anyway, and that no one will ever give a crap if their murder remains unsolved. This plan works very successfully for them until they make the horrifying discovery that their latest victim was an undercover DEA agent! The two cops are put in the unenviable position of having to solve a murder that they committed themselves, and it becomes clear that the DEA will not back off until someone pays for the crime. Divinci and Rodriguez realize that they’ll have to frame someone else to go down for their murder, and eventually find the perfect candidate: an alcoholic, mentally ill homeless derelict known only as Joe (Dennis Quaid). After the two cops spend an entire night manipulating Joe and getting him drunk, even HE becomes convinced that he actually committed the murder and is coerced into signing a confession. The cops also plant the murder weapon on Joe and convince Cynthia to testify that she witnessed the shooting, and it seems like this is going to be a simple open-and-shut case.

Of course, it soon becomes apparent that Divinci and Rodriguez’s fabricated murder case is not going to be as open-and-shut as they thought, and their master plan starts to completely unravel. While they assume that nobody will ever care about what happens to a transient like Joe, they are shocked to learn that “Joe” actually has quite an interesting past, leading to a surprise appearance by James Earl Jones as a high-profile attorney who comes to Joe’s defense. Of course, I dare not reveal too many of the twists and turns, as much of the fun in Gang Related comes from witnessing the unexpected ways in which the plot unfolds. While the trailer may give off the impression that Gang Related is your standard action-oriented police thriller, it’s actually a lot more story-driven and could almost be described as a modern version of an old-school film noir picture. One of the most classic elements of film noir stories are protagonists who do illegal things and find themselves in way over their heads when they try to cover up what they’ve done, and Gang Related takes that idea and turns it up to eleven! One of the biggest criticisms that could be directed at the film is that the main characters aren’t very likable, but I actually think that’s kind of the point here. In a lot of these film noir stories, the protagonist is usually a likable person whom you hope will get away with his scheme, and you feel bad for him when things start to unravel. In Gang Related, the exact opposite is true. You really hope that Divinci and Rodriguez’s plan will backfire in a horrible fashion, and the film is tremendously entertaining in the ways that it piles on complication after complication in order to screw these guys over. Gang Related actually works more as a black comedy than as a thriller, and makes for a very enjoyable tale of karma and how your mistakes can come back to burn you in a big way. Even though Divinci and Rodriguez are not sympathetic characters, they are still a lot of fun to watch when their world comes crashing down on them.

Writer-director Jim Kouf’s past efforts include two of my personal favourite cop-buddy films, Stakeout and The Hidden, and he would follow up Gang Related by co-writing one of the most popular cop-buddy films of all time, Rush Hour. Kouf definitely knows how to write interplay between mismatched characters, and James Belushi and Tupac Shakur actually have a surprising amount of chemistry together. The sleazy, amoral Divinci is actually a tailor-made role for Belushi and he delivers one of his better performances, while Shakur matches him well as Rodriguez, who has a lot more of a conscience than his partner. Give Tupac’s known history of run-ins with the law, his fans initially laughed at the idea of him being cast as a cop (albeit a very corrupt one), but he’s very convincing here. Shakur’s horrified reactions to the mess he’s gotten himself into provide some of the movie’s biggest laughs, but he also brings a lot of poignancy to his role. This film definitely proved that he had genuine talent as an actor and given how many rappers have made a successful transition to the big screen over the years, it’s likely that Tupac would have had himself a very good career if not for his untimely death. Special mention should also be made of Dennis Quaid’s strong performance as Joe, as the actor is totally unrecognizable at the outset of the film and he does not hold back at disappearing completely into the most unglamorous role imaginable. As a whole, Gang Related is the working definition of a “pleasant surprise” as you don’t go into it with high expectations, but find yourself becoming really caught up in its labyrinthine story. Jim Kouf keeps his clever plot unfolding very well, and only missteps with a conclusion that is pretty illogical and contrived, but is still amusingly ironic and in keeping with the tone of the picture. Given how much the legacy of Tupac Shakur’s music has carried on long after his death, it’s a real shame that his final film has pretty much faded into obscurity, but it is well worth checking out and paints an interesting portrait of an acting career that might have been.