The Back Row’s Weekly Serial Review: Drums of Fu Manchu 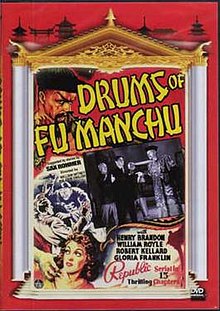 Basic Story Line
Criminal mastermind Fu Manchu is attempting to find the lost sceptre of Genghis Khan, that will allow him to proclaim himself ruler of Asia. It is a race between him and Detective Sir Nayland Smith to decipher the clues that will lead to the tomb of Genghis Khan and the sceptre.

Dr. Fu Manchu was first created in 1913, in a series of novels and short stories by Sax Rohmer. With little regard for continuity Fu Manchu and his nemesis, Sir Nayland Smith, do battle all over the world in dark and moody stories that became an instant hit. Fu Manchu films started being made as early as 1923. Christopher Lee, Boris Karloff, Peter Sellers all have portrayed the criminal genius. He even appeared in the fake trailers that were part of the 2007 Grindhouse double feature. Fu Manchu has had a radio series, a short lived television series, there was talk of a Fu Manchu Broadway musical (It never happened, but I would pay to see it), Ming the Merciless, from the Flash Gordon comic strip, has obvious physical similarities to Fu Manchu, there is a band called Fu Manchu, and his signature moustache is now referred to as a Fu Manchu moustache.

As with most people of the time Sax Rohmer freely admitted that he had next to no knowledge of Asia. It’s pretty safe to assume that the people who made this serial also knew very little about Asia. It is this ignorance that gives Drums of Fu Manchu a very colonial feel. There are characters who remark that the British brought peace and order to Asia and only they can maintain it. In this serial the native Mongolians believe that the man who holds Genghis Khan’s sceptre will be their leader. At one point the heroes say they will leave the sceptre with the British military. At another point they say they will give it to the High Lama. In the end, the High Lama tell the Mongolian tribes that the British have the sceptre and that they should all look to the British as their kind and just leaders. It is this prevailing belief of the time, that only people of European descent are civilized, and it is their duty to civilize everyone else, that may make your skin crawl.

Fortunately there is more to this serial than just a bit of jingoism. It is a cat and mouse game between Sir Nayland Smith and Fu Manchu. It has an interesting combination of a dark and dangerous film noir detective story, with the flamboyant, over the top, style of a comic book super villain. Anyone who has followed my revues knows that I firmly believe that a good serial relies on a cool villain. Fu Manchu is not only a cool villain, he is the coolest thing in this serial. He has a slave army, that he has lobotomized, who use cool low tech weapons like blow darts, bolas, and throwing knives. He has a beautiful and dangerous daughter, who accompanies him on his dastardly missions. He has deadly pets, a sense of honour, and, of course, he has the moustache. He is a criminal genius who plots, lays traps, and has long term plans. He will not lie to his opponents. He will lead them forward and watch them walk into his traps all on their own. Next to Fu Manchu the heroes are boring and completely forgettable.

The directing team of Witney and English have made some of my favourite serials. (Of course, if you follow my column, you already know that.) Here they deliver a serial that is visually interesting, moves quickly, and has some good action sequences. Their three main actors all give solid performances. Robert Kellard, who plays Allan Parker, the young hero and Smith’s assistant, was already a veteran on two classic Universal monster movies, Dracula and Frankenstein. Witney and English also make good use of the drums in Drums of Fu Manchu. In the serial the drums are used as a forewarning of death, Witney and English use them as an effective device to build tension. Drums of Fu Manchu is another good serial by two of the best.

Drums of Fu Manchu is not without its problems. However, it should be viewed as a product of its time. Fu Manchu is one of those villains who is so cool he can rise above the controversy and has become an icon of popular culture. Now, if you’ll excuse me, I need to see if I can find a Sax Rohmer novel and one of Christopher Lee’s Fu Manchu movies.

Things to watch for
-A pit with a giant octopus.
-A poisonous lizard is use for a murder
-One of the best looking train wrecks I have seen in a serial
-A henchman with fangs
-Robert Kellard, playing Fu Manchu, playing Allan Parker

The Back Row Weekly Serial Drinking Game
While watching a serial, anytime you or a friend point out a plot hole or inconsistency, take a drink. (Note: Yes, the fact that the film makers can’t seem to decide whether the drums are real, in someone’s head, or just part of the sound track, is worth a drink.)
Odds of getting sloshed: Medium