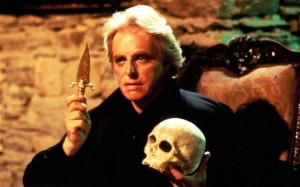 While writing this week’s “Robin’s Underrated Gems” column for God Told Me To, I was surprised to learn about a recent death which completely slipped under my radar, as one of the film’s stars, Richard Lynch, passed away of a heart attack on June 19, 2012 at the age of 72. You may not be familiar with his name, but there’s a good chance you’ll recognize his very distinctive face, especially if you’re a B-movie fan. That scarred face of his came about in 1967 when Lynch set himself on fire in New York’s Central Park while on a bad LSD trip! Thankfully, Lynch made a full recovery and his scarred appearance actually helped him launch a successful career playing villains. His filmography consists of over 160 film and television credits, and his most memorable role was probably in the 1985 action film, Invasion U.S.A., as Rostov, a Russian terrorist who attempts to take over America, but is no match for Chuck Norris and his rocket launcher.

Sure, many of Richard Lynch’s films weren’t exactly classics, but he always managed to make a memorable impression in them. Some of his titles included The Seven-Ups, Scarecow, The Sword and the Sorcerer, Savage Dawn, The Barbarians, Bad Dreams, Little Nikita, Alligator II: The Mutation, Trancers II and Scanner Cop. Rob Zombie even gave Lynch a small role as Michael Myers’ school principal in his 2007 reboot of Halloween and he was actually cast as the President of the United States in the lucha libre film, Mil Masacras vs. The Aztec Mummy! Some of my personal favourite roles of his include playing a biker who feels Stacy Keach’s wrath in The Ninth Configuration, and being cinema’s creepiest depiction of Jesus Christ in the aforementioned God Told Me To. Oh, and if nothing else, Mr. Lynch deserves a medal for being able to deliver a decent performance in the Mystery Science Theater 3000-featured abomination, Werewolf, especially when playing scenes with the worst actress of all time, Adrianna Miles. R.I.P., you will be missed.