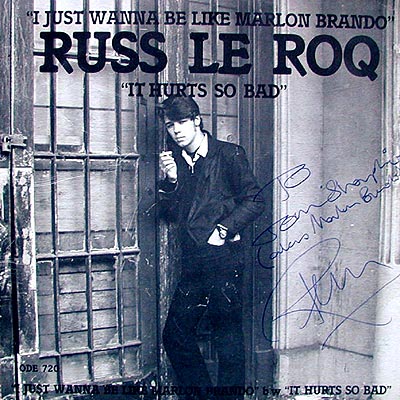 I never get tired of digging up obscure Russell Crowe footage from his native Australia, whether it be his performance in a stage production of The Rocky Horror Picture Show or his appearance in a lame recruitment video for Avondale College. Well, did you know that during his teens, Russell attempted to embark on a career as a rock musician, and went so far as to create a rock n’ roll revivalist alter-ego for himself named “Russ Le Roq”?! He even released a hit single on vinyl entitled “I Just Want to be Like Marlon Brando”. Of course, he eventually changed career paths, but here’s one of his music videos from when he was about 17 or 18, along with footage of him being interviewed on a local TV show.