Celebrity Birthday of the Day – July 24 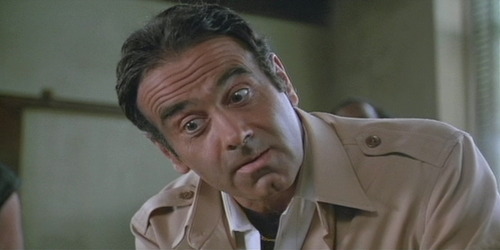 You know that The Back Row loves to pay tribute to character actors, a.k.a. “That Guys”, and today we celebrate the birthday of one of the most prominent: Dan Hedaya. Ever since starting out his career in the 1970s, Dan Hedaya has become of Hollywood’s most recognizable character actors and has over 120 film and television credits to his name. The Coen brothers gave him one of his best roles when they cast him as the insanely jealous husband, Julian Marty, in their debut film, Blood Simple, and from then on, it seemed like virtually every other film that got released had Dan Hedaya in it.

Some of his other memorable roles included playing the evil Central American dictator who kidnaps Arnold Schwarzenegger’s daughter in Commando, Alicia Silverstone’s father in Clueless, and Richard Nixon in Dick. Other notable films he has appeared in include The Addams Family, The Mighty Ducks, The Usual Suspects, Nixon, Alien Resurrection, A Civil Action, The Hurricane and Shaft. Whether cast as a good guy or a bad guy, no one can play surly characters quite like Dan Hedaya. And here’s an obscure piece of trivia for you: Hedaya had a recurring role as Carla’s sleazy ex-husband, Nick Tortelli, on Cheers, but did you know the character got his own short-lived spinoff, The Tortellis? Anyway, Dan Hedaya turns 72 today.

This entry was posted in Features, Movies, TV. Bookmark the permalink.