Runstedler’s DVD Pick of the Month: The Great Silence 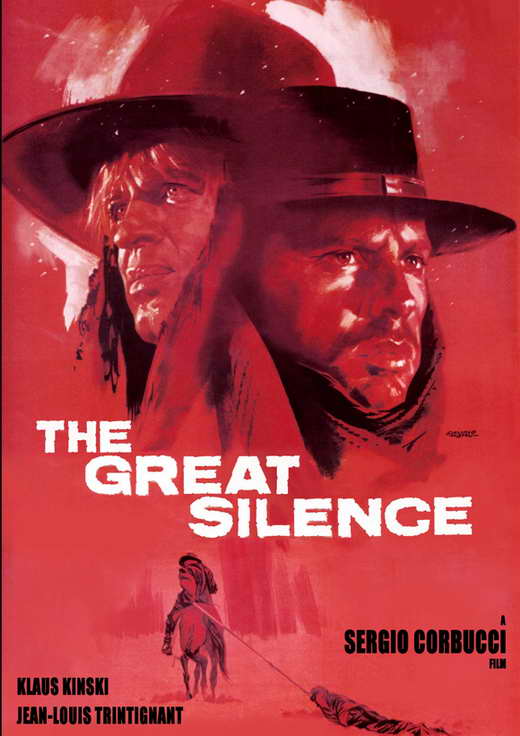 After reading all of Cormac McCarthy s novels, I’ve been on a spaghetti/revisionist Western kick. Among the scores of spaghetti Westerns out, Sergio Corbucci’s 1968 film The Great Silence stands out as a highlight. In many ways superior to Corbucci’s other classic film Django, The Great Silence features another captivating soundtrack by Ennio Morricone and an excellent villain whose presence is worthy of the caliber of Angel Eyes from The Good, the Bad and the Ugly.

The villain in The Great Silence is a wild-eyed, dangerously unpredictable bounty hunter played with perfect lunacy by Klaus Kinski. Loco leads a team of thuggish bounty hunters through a starving village in the snowy mountains, and faces swift opposition from the protagonist, who is a mute gunslinger. Every scene with Loco is worth watching, particularly his scenes with the ridiculously naïve new sheriff in town.

That being said, The Great Silence is masterfully conceived. The plot is well done and the mountainous cinematography is superb. Gone are the desert vistas and the vast canyons in this film; instead, the endless deserts are replaced with frigid snow passes and forests of conifers coated in snow. The ending is a bit of a shocker, featuring unexpected tragedy as well as an all-out massacre. However, Corbucci’s attempted political ideas and messages seem to work, and he touches on subjects such as lawlessness, morality and justice. Although The Great Silence doesn’t quite ascend to the peak of Sergio Leone’s finest works, it’s a masterpiece in its own right, and it should definitely be seen right away, if not bought.

This entry was posted in Movies, Runstedler's DVD Pick of the Month. Bookmark the permalink.