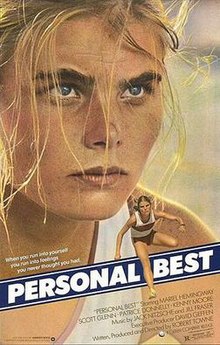 We are currently in the midst of the 2012 Summer Olympic Games, so I figured I should I do an “Underrated Gems” column on a film related to the subject. Unfortunately, there aren’t many Olympic movies to choose from that don’t involve a Jamaican bobsled team, though there does exist a very solid film named Personal Best, which involves the United States women’s track and field team training for the 1980 Summer Olympic Games in Moscow. However, given that America wound up boycotting those Games in order to protest the Soviet invasion of Afghanistan, the ending to that story might seem a bit anticlimactic. Thankfully, writer-director Robert Towne decided to compensate for that by using the premise as the backdrop for a very interesting and complex lesbian love story. I previously did a column on Towne’s 1998 film, Without Limits, which told the life story of renowned long-distance runner Steve Prefontaine and his quest to win a medal in the Olympics. On the surface, it seemed like a strange subject for a sports movie since Prefontaine wound up placing fourth in his race at the 1972 Olympics and had his life cut short by a car accident before he could attain his dream. But Robert Towne was never interested in telling a conventional, formulaic sports story and has always preferred to focus on how the pressure of competition can affect one’s relationships with other people. Personal Best remains one of the most convincing films ever made about athletics and the drama that can ensue when two people who are in love with each other have to compete for the same goal.

Personal Best opens during the track and field trials for the 1976 Summer Olympics, where a young runner named Chris Cahill (Mariel Hemingway) has missed qualifying. Chris is coached by her driven, perfectionist father and is emotionally distraught by her failure. Later that night, Chris goes to a bar and meets an older track star named Tory Skinner (Patrice Donnelly), who has qualified for the Olympics in the pentathlon and tries to comfort the younger athlete. The two of them spend the night in Chris’ dorm room where, to their surprise, they find themselves attracted to each other and begin a lesbian relationship. Tory then decides to take Chris under her wing and convinces her to move away from her father and join her track and field team, where she will be mentored by one of the top track coaches in the country, Terry Tingloff (Scott Glenn). Tingloff is a major hardass who is tough on his athletes and is reluctant to take on Chris, but once he sees how talented she is, he makes her his pet project and vows to prepare her for the 1980 Olympics. Chris and Tory continue with their relationship, but things get complicated when Coach Tingloff decides to train Chris to compete in the pentathlon… which, of course, is Tory’s signature event. Does Tory really want to see her girlfriend succeed when they’re now competing against each other for the same thing? The relationship between Chris and Tory is one of the most mature lesbian romances ever depicted in a film, and lots of chemistry is generated during their first night together when they have an arm wrestling match that is both competitive and erotically charged.

Their relationship is perfectly established by the moment where Tory convinces Chris to concede the arm wrestling match and then proceeds to defeat her. Chris is a very naïve and innocent girl who is very gifted physically, but fairly stunted emotionally. The more experienced Tory is obviously a great mentor for Chris, but once they wind up competing with each other, Tory is capable of finding ways to undermine Chris’ performance, such as when she convinces Chris to perform an unsafe maneuver during the high jump which causes an injury. Coach Tingloff is fairly accepting of Chris and Tory’s lesbian relationship at first, but once he believes that their personal drama is affecting their performances, he does his best to steer Chris away from her new rival. Tingloff is the most complex and interesting character in the movie as the viewer is often unsure whether to hate or sympathize with him. He is obviously very manipulative and employs lots of questionable tactics, but you sense that he does genuinely care about his girls and there is something strangely honourable about his decision to take on the challenge of being a women’s track coach. Scott Glenn is terrific in the role, especially during a monologue where he describes his regret at turning down an opportunity to become a football coach and how he could have avoided so much drama in his life if he had chosen to coach men instead. Personal Best captures the camaraderie of the world of female athletics so convincingly that you’re almost surprised that the film was directed by a man. Robert Towne had spent many years as one of the top screenwriters in Hollywood, garnering three Academy Award nominations, including a victory for penning one of the greatest screenplays of all time, Chinatown. Personal Best marked his directorial debut and, just like in Without Limits, he showed himself to be a master at directing track and field sequences and capturing the physicality and excitement of the sport.

Of course, Personal Best largely works because of the chemistry between Mariel Hemingway and Patrice Donnelly. Like in her follow-up film, Star 80, Hemingway showed herself to be very effective at playing naïve, innocent wide-eyed characters and she also makes a very convincing track star. However, the real surprising performance is by Donnelly, a former track star who actually did compete in the 100-meter hurdles in the 1976 Olympics and had ZERO acting experience before this film! She proves to be a real natural in front of the camera and probably could have had a solid acting career if she really wanted to. In fact, many of the characters in this film are played by real athletes who turn out to be surprisingly good actors. Kenny Moore, a marathon runner who wound up finishing fourth in the 1972 Olympics, shows up late in the film as a water polo player who becomes romantically involved with Chris, and he delivers a convincing performance as well. Moore would actually go on to co-write Without Limits with Towne and was portrayed in that film by Twilight star Billy Burke. Anyway, the film builds up to a climactic sequence at the Olympic trials, which, of course, turns out to have little significance since the country winds up boycotting the Games. But even though the results of the trials don’t wind up meaning much in the long run, Towne directs these climactic sequences very well and has done such a good job at making you care about these characters that you are still invested in the outcome. In spite of drawing good reviews, Personal Best was a flop at the box office during its original release and is pretty much forgotten about today. At the time, not many Hollywood films were willing to provide such an intelligent, mature look at a lesbian relationship, so maybe that’s what caused viewers to stay away. However, Personal Best still holds up pretty well 30 years later and would probably make a nice diversion if you’re getting stick of all the non-stop Olympic coverage.