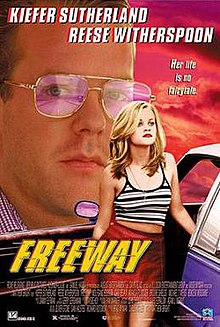 Two years ago, The Back Row put the spotlight on an ultra-bizarre 2003 movie called Tiptoes, which was prominently featured on Cracked.com in an article entitled “The Single Most Ridiculous Movie Premise Ever Made”. Long story short, this movie starred Matthew McConaughey as the only normal-sized son in a family of dwarves and, believe it or not, the one and only Gary Oldman played his dwarf brother! You’re probably wondering what kind of demented person would make a movie like this. Well, the director of Tiptoes is named Matthew Bright and it probably wouldn’t surprise you to hear that he hasn’t directed another movie since then. However, it may surprise you to hear that Matthew Bright once made another demented, but very effective movie that is worthy of the “Robin’s Underrated Gems” treatment. Bright had worked as a screenwriter in Hollywood for many years, penning such films as Forbidden Zone and Guncrazy, and in 1996, he made his directorial debut with a satirical dark comedy called Freeway, a very unique modern variation on Little Red Riding Hood. Last year, the fantasy film, Red Riding Hood, was released to a less-than-positive reception, as many people felt that Twilight director Catherine Hardwicke was not the most ideal choice to make a new screen adaptation of the Little Red Riding Hood legend. Though the two films are as different as can be, some reviews did compare Red Riding Hood to Freeway, which told its story in a much more clever and inventive fashion. It’s not often that you can describe a film as a cross between Little Red Riding Hood, Henry: Portrait of a Serial Killer and The Jerry Springer Show, but that’s exactly what Freeway is.

Freeway opens with a title sequence that depicts the Little Red Riding Hood story in drawings, set to a whimsical music score by Danny Elfman (who once played in a band alongside Matthew Bright). The story’s heroine is not someone you’d normally associate with Little Red Riding Hood. Vanessa Lutz (Reese Witherspoon) is a 15-year old girl from a broken home in the slums of Los Angeles who could generously be described as “white trash”. However, even though she is foul-mouthed and illiterate, Vanessa actually seems pretty charismatic and intelligent. Vanessa’s mother (Amanda Plummer) is a prostitute and her stepfather (Michael T. Weiss) is a drug addict who is constantly making passes at her and, as the film opens, they are both busted by the cops in a sting operation. Vanessa is opposed to the idea of social services placing her in foster care, so she decides to steal a car and drive to Northern California in order to go live with her grandmother. After Vanessa’s car breaks down, a motorist named Bob Wolverton (Kiefer Sutherland) pulls over to offer his assistance and give her a lift. Bob works a child psychologist and comes across as a friendly, supportive mentor for Vanessa, eventually getting her to open up about her dysfunctional life during their trip. Of course, given the not-so-subtle fact that his last name is “Wolverton”, you know things are going to turn bad. It soon becomes obvious to Vanessa that Bob is a disturbed pervert and she discovers that he is actually the infamous “I-5 Killer”, who has been all over the news for raping and killing numerous young girls. (In one wonderfully ironic moment, Vanessa shows Bob a photo of her biological father, who turns out to be real-life mass murderer Richard Speck.) Vanessa is about to become his latest victim when she decides to fight back and winds up shooting Bob numerous times.

Miraculously, Bob survives the shooting and Vanessa is soon arrested for attempted murder. Because Bob is a respected psychologist and Vanessa has a troubled background and is considered to be white trash, no one believes her story that Bob is a serial killer and that she shot him in self-defense. The bullet wounds to Bob’s face have left him a complete disfigured mess who is forced to speak through a voice box and since Vanessa shows no remorse for her actions, the authorities just assume Bob was the innocent victim of a random carjacking and intend to throw the book at Vanessa. It probably wouldn’t be a spoiler to mention that this story eventually climaxes with Vanessa making it to her grandmother’s house and finding Bob Wolverton dressed in drag in her bed. Matthew Bright uses the Little Red Riding Hood narrative as a jumping point to satirize such targets as the legal system and the public’s fascination with violence. In 1996, the popularity of trashy talk shows such as Jerry Springer was at an all-time high and, at first glance, Vanessa perfectly personifies the stereotype of someone who would appear on those programs. To be fair, the character is no angel, but she’s so strong-willed and resourceful that you sense she might have gone on to big things if she had not been raised in such a dysfunctional environment. In keeping with the movie’s satirical message about perception, none of the characters can fathom the possibility that Vanessa was acting in self-defense until a black detective with a major chip on his shoulder finds out that she used to have a black fiancée and figures she must be okay after all. In contrast, Bob has such an outwardly likable personality that no one could fathom him being a serial killer, but after he’s disfigured, he totally fits the stereotype of what we’d expect a monster like him to look like.

Reese Witherspoon already had quite a few acting credits under her belt at this point, but this a performance that really helped put her on the map. She is simply sensational as Vanessa and is the major reason the film works as well. Witherspoon injects so much energy and charisma into the role that an imperfect character becomes a very likable and sympathetic heroine. Some of the critics who reviewed Freeway even said they probably wouldn’t have liked the film at all if it wasn’t for Witherspoon’s strong performance. Even though this was one of Witherspoon’s breakthrough roles, it’s a polar opposite to most of the roles she’s played since then and about as far removed from the Legally Blonde films as you can get. Kiefer Sutherland is equally as good as Bob Wolverton, coming off as believable and sincere in his early scenes before morphing into a genuinely creepy villain. While Vanessa and Bob occupy a majority of the screen time, but the film does contain a memorable gallery of colourful supporting characters, particularly Amanda Plummer and Michael T. Weiss as the troubled mother and stepfather, Brittany Murphy as a heroin-addicted lesbian who befriends Vanessa in prison, and Brooke Shields as Bob’s delusional wife. Matthew Bright actually made a sequel to Freeway in 1999 called Freeway II: Confessions of a Trickbaby, but it had nothing to do with the original film and basically followed the same formula of being a trashy modernized variation of a famous fairy tale (this time Hansel and Gretel). Freeway II quickly faded into obscurity, and after directing the infamous Tiptoes, Matthew Bright did too. In spite of its impressive cast, Freeway itself has almost faded into obscurity, though it does have a cult following. The film definitely an acquired taste, but it’s well worth checking out, particularly if you want your Little Red Riding Hood stories to be less Twilight and more Quentin Tarantino and David Lynch.