The Back Row with Extra Pulp: Conan the Barbarian With the recent (although not overly successful) Conan movie staring Jason Mamoa, the sword swinging barbarian has been brought back into public consciousness. Being the fan of old pulp fiction that I am, I thought I should look at some of the original Robert E. Howard stories.

Robert E. Howard was a bit of a loner who grew up in small town in Texas. He had a hard time connecting with the people around him and was bullied as a child. As an adult he had to spend a good deal of his time looking after his ailing mother. As an escape he would write swashbuckling hero tales. The magazine called Weird Tales specialized in science fiction and horror stories. In the early 1930s, to fit their mandate, Robert E. Howard added a fantasy element to one of his swashbuckling tales and created Conan. Conan was not the only or even the first character Howard had created but he quickly became one of the most popular heroes of the era and Howard published 17 Conan stories in Weird Tales, some of which were novel length (all of which had rather scandalous covers for the time).

When asked what his readers wanted, Robert E. Howard answered, “action”. Conan is the ultimate male fantasy. He is big, strong, brave, a fierce fighter, a man of action, whose bravery and charisma wins the respect of the men he meets, and the affection of the beautiful, half naked (or just naked) women he saves. By claiming that the Conan stories are nothing but action, Howard did them a disservice. Although the Conan stories are relentlessly action oriented, there is often more to them than just naked women and Conan hacking down monsters. In The Phoenix on the Sword, the first Conan story, Howard deals with humanity’s fickle nature. In The Scarlet Citadel, he touches on the responsibility of leadership. Robert E. Howard created a whole prehistory to his world, going back thousands of years. The first story takes place near the end of Conan’s adventures, when he has settled down as King of Aquilonia, but Howard gave Conan a rich and varied backstory that he could dip into, setting a story at any point in Conan’s life.

The outsider is a recurring theme in the Conan stories. Conan is a man without a home. He left his inhospitable homeland to find adventures and riches in the south. There, Conan and his straight forward barbarian ways are out of place among the hypocrisy and the subtle cruelties of the civilized world. In the story The Tower of the Elephant, Conan feels more empathy with a blind, lame, creature from another world than with its human tormentor. Never marrying and growing up in a small Texas town with few friends, Robert E. Howard himself probably felt like an outsider. Being a writer and having a vivid imagination set him apart. It was likely, in part, this sense of isolation that drove him to commit suicide in 1936, shortly after he was told his mother would not come out of her coma and would die.

You can’t say Howard created, or even pioneered the Sword and Sorcery genre. Characters like Sinbad, Aladdin, Beowulf, and King Arthur were fighting monsters and evil magicians centuries before Conan. Robert E. Howard did however, popularize it for the modern reader. The Conan stories have always had a certain amount of popularity and the influence of them is still felt today. In the 1930s they were popular as pulp fiction, they were then bound together as collections of short stories. Marvel made Conan into a comic book hero. He really exploded when Arnold portrayed him on the big screen. The character then started to suffer from over exposure as he began to appear in video games, on posters, and lunch boxes. There were a plethora of knockoffs, of varying quality, with movies such as Beastmaster and Ator (I did say varying quality), and comic books such as Daggar the Invincible. The Conan character appeared in bad television shows and cartoons. Parodies started to crop up. Conan stopped being cool and became the butt of jokes. However, if you wade through all the crap and go back to the source, Conan is still cool and still worth reading. 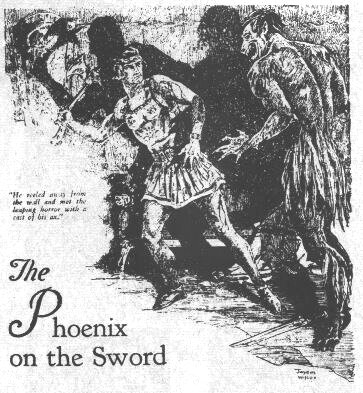