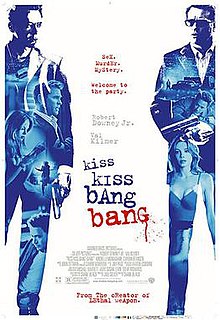 If there’s one filmmaker who seems to have an obvious grudge against Christmas, it’s director-screenwriter Shane Black. For some reason, the guy loves to write violent action films which happen to take place around the holiday season, and often feature a high body count and people getting kidnapped. Of course, the screenplay that originally put Black on the map was Lethal Weapon, which took place at Christmastime, and even though all mention of Christmas was removed from the finished film, his original screenplay for The Last Boy Scout was originally set during the holiday season. Black`s anti-Christmas views hit their peak during the climax of The Long Kiss Goodnight, where a chemical bomb nearly goes off kills thousands of innocent people on Christmas Eve, while an eight-year girl is kidnapped and nearly frozen to death inside a meat freezer. When Black finally made his directorial debut in 2005 with Kiss Kiss Bang Bang, to no one’s surprise, the story took place at Christmastime. What’s funny is there’s no particular reason that any of these stories HAD to take place at Christmas, so it would be interesting to get inside Shane Black’s head and find out why he holds such a massive grudge against the holiday season. Anyway, during the 1990s, Black became the highest-paid screenwriter in Hollywood and the $4 million he received for his script for The Long Kiss Goodnight is a record which still stands today. He disappeared from the world of cinema for nine years before he returned to make Kiss Kiss Bang Bang, a film where Black gleefully pokes fun of a lot of the genre clichés he helped establish. The end result was one of the most criminally underrated films of the decade.

The set-up for Kiss Kiss Bang Bang is ridiculously contrived, but the director clearly wants it that way. Harry Lockhart (Robert Downey, Jr.) is a petty thief from New York City who finds himself attempting to escape from the police after a botched robbery. Harry ducks into a room where a casting call is taking place and is mistaken for an actor. He winds up giving such a good reading for the producers that they decide to fly him out to Los Angeles to possibly earn himself a lead role in a detective movie. In order to learn how to play a convincing detective, Harry is teamed up with a gay private investigator named Perry van Shrike, a.k.a. “Gay Perry” (Val Kilmer), who takes him along on a seemingly routine assignment. However, much to their surprise, the duo find themselves embroiled in a complicated murder plot. Smack-dab at the center of this plot is the sister of Harmony Faith Lane (Michelle Monaghan), a childhood friend of Harry’s who has come to L.A. to pursue an acting career. Harmony’s sister somehow got herself involved in an elaborate scheme which eventually got her killed, so Harmony enlists Harry and Perry’s help in order to find out who’s responsible. Of course, anything that could possibly go wrong for Harry does go wrong, which includes losing one of his fingers, getting his privates electrocuted, and finding a corpse in his hotel bathroom. Being that this a Shane Black film, there is a lot of dark, macabre humour punctuated by hilarious dialogue exchanges.

Kiss Kiss Bang Bang is an old-school hardboiled film noir story and on the surface, the plot probably sounds pretty routine. However, Shane Black is well aware of this and gleefully acknowledges all the story’s contrivances and cliches. Kiss Kiss Bang Bang is loosely based on a 1941 novel from mystery writer Brett Halliday called Bodies Are Where You Find Them, but tongue is planted firmly in cheek here. This is a film noir that both satirizes and embraces the clichés of the genre, but is still sincere enough to never cross the line into full-fledged parody. Kiss Kiss Bang Bang is incredibly self-aware, particularly with Harry’s voice-over narration, where he will stop mid-sentence to address the audience, rewind the story, and apologize for how bad his narration is. When a character named Harlan Dexter (Corbin Bernsen) pops up early on to deliver some seemingly superfluous exposition, Harry’s voice-over disgustedly points out how obvious it is that Dexter is the villain and that the information he provided will prove important later on. Black even pokes fun of standard clichés which he has used in his own scripts in the past, such as fooling the audience into thinking that a sympathetic character has died before he miraculously comes back to life at the end. However, even with all the self-aware humour and winking at the audience, Black still knows how to write likable and engaging characters that you still care about. He is definitely one of the all-time best when it comes to writing sharp, witty dialogue between mismatched characters, and his interplay between Harry and Gay Perry is just priceless.

Kiss Kiss Bang Bang took place at a crucial point in Robert Downey Jr.’s career, when he had just recovered from his much-publicized substance abuse issues. Given his problems, it must have seemed like a huge risk at the time to trust Downey with the leading role in a film. However, the gamble did pay off since the actor is just delightful as Harry and plays the material with perfect comic timing. Likewise, Val Kilmer’s career was not exactly in the best shape when Kiss Kiss Bang Bang came out, but he delivers one of his best performances and his chemistry with Downey is impeccable. Kiss Kiss Bang Bang probably played a huge role in Downey’s comeback and helping him get back onto the Hollywood A-list. It’s somehow appropriate that Shane Black has been given the directorial reins on Iron Man 3 and it should be a lot of fun to see him reunite with Downey again. However, it is a shame that we’ve had to wait eight years for Black to make another film because Kiss Kiss Bang Bang was nowhere near the success it deserved to be. In spite of good reviews, Warner Bros. just didn’t seem to have a lot of confidence in the film and only gave it a limited theatrical release. The studio may have thought that audiences wouldn’t know what to make of the movie`s irreverent, self-deprecating tone, but Kiss Kiss Bang Bang has developed a cult following over the years from supporters who never hesitate to spread the word about the film’s merits. So, in closing, if you`re sick of all the standard Christmas movies and are in the mood to check out some more cynical holiday fare this year, give the underrated Kiss Kiss Bang Bang a shot.