Posted on January 5, 2013 by curtisrunstedler 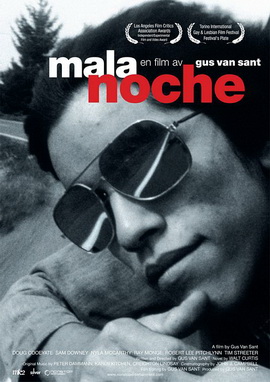 Shot on a shoestring budget on 16 mm film in black and white, it’s about a young gay man who runs a convenience store and becomes involved with two young Mexicans. Based on Walt Curtis’ autobiography, Walt runs a dead-end in a convenience store in a relatively boring town, andhe  is smitten by Johnny, who frequently visit his store with his friend Roberto. Walt becomes desperately infatuated with Johnny, eventually offering him money for sex. Johnny coldly rejects him, and Walt turns to Roberto instead. The Mexican boys are indifferent to Walt, who aches for love, and despite his charming advances, offering them shelter and food and even teaching them how to drive, they are more interested in using him for their own benefit. Walt, who is blinded by his affection and yearning to be fulfilled, cannot see this. I think that the Mexican boys are poor and bored and they see Walt as an outlet to benefit their cause. Mala Noche (as is always the case with Gus Van Sant’s films) is stylistically attractive, from his use of close-ups to the Dutch angles he effectively uses later on.

The shots speak so many words without saying any at all. I was also attracted to his use of lighting. I really enjoyed how Johnny is depicted in the darkness with half of his face silhouetted and the other half shrouded in opaque blackness (this is shown on the film poster too). The themes of loneliness and unrequited love  would also recur in Gus Van Sant’s later films. Elephant deserves the most accolades for its effective vignettes of the lives involved in a school shooting, but Mala Noche is an overlooked and impressive debut and a worthy quasi-companion piece (thematically speaking) to My Own Private Idaho.