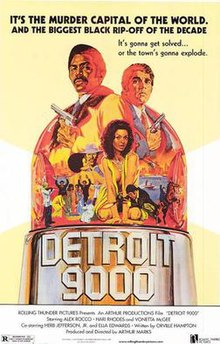 With the recent release of Quentin Tarantino s Django Unchained, I’d say it’s probably an appropriate time to revisit another one of the director’s personal favourite films. In the mid-nineties, Tarantino started his own distribution company called Rolling Thunder Pictures. The company was named after one of his all-time favourite cult movies, so of course, it specialized in providing theatrical and home video re-releases to cult films. Some of the older movies released under this label included the grindhouse classic, Switchblade Sisters, and the priceless Hong Kong monster movie, The Mighty Peking Man. If you’ve ever seen Jackie Brown, you’ll know that Tarantino has quite a fondness for the blaxploitation genre, so shortly after the release of that film, he decides to dig a 1973 blaxploitation flick called Detroit 9000 out of obscurity and gave it a re-release. Blaxploitation pictures were being churned out like crazy during the early 1970s and while Detroit 9000 is not one of the more well-known entries in the genre, you had to suspect there was a reason Quentin Tarantino had so much fondness for it. Indeed, Detroit 9000 is actually a lot more intelligent and ambitious than your average blaxploitation film. Sure, given that it’s a low-budget grindhouse release, it’s hardly a polished piece of work and has more than its fair share of campy moments. Yet it actually has some interesting things to say about race relations and big-city politics and though many parts of it are obviously pretty dated, Detroit 9000 actually deals with some issues which are still relevant today.

As you probably guessed from the title, the story takes place in Detroit, where a local congressman named Aubrey Hale Clayton (Rudy Challenger) is holding a fundraiser for his campaign to run for governor of Michigan. The fundraiser is attended by some of the richest folks in Detroit, which makes them a prime target for robbery when a gang of masked thieves crash the party and take over $400,000 worth of valuables and campaign contributions. Of course, Congressman Clayton demands that the thieves be captured immediately and due to the political and racial implications surrounding the heist, the Detroit police find themselves under enormous pressure to solve the case. Many members of the public and the media believe that the heist is all part of some racist conspiracy to keep a black politician out of office and question how much effort the Detroit P.D. will make to capture the perpetrators. The case is assigned to Detective Danny Bassett (Alex Rocco), a hard-luck cop who is constantly dealing with the stress and financial strain of keeping his mentally ill wife in a sanatorium. He also seems to be the only person who doesn t believe that the heist was or politically or racially motivated. To quell any accusations of racism, the department teams Danny up with a black detective named Jesse Williams (Hari Rhodes), a former pro football star who is a well-regarded hero in the African-American community. Danny often frequents a local whorehouse and discovers that one of the prostitutes, Ruby (Vonetta McGee), might be connected to the heist. Coincidentally, Ruby also happens to be Jesse’s former lover and the two detectives hope to use her to help track down the thieves.

On paper, the plot of Detroit 9000 is pretty standard stuff, but there are a lot of interesting story elements which help distinguish it from many others in the genre. While the film opens with an exciting heist sequence and features an action-packed final act, the middle section is very plot and character-oriented. As a result, the pacing Detroit 9000 feels pretty uneven, almost as if the filmmakers were attempting to tell a thoughtful story about race relations, but then suddenly remembered they were making a grindhouse picture two-thirds of the way through. However, the film is constantly interesting and is often elevated by the strong performance of Alex Rocco, a long-time character actor who had just come off a memorable turn as Moe Greene in The Godfather and was playing a rare lead role here. It must have seemed very unusual to give a white actor the lead role in a blaxploitation film, but Danny is a very complex character who may have his flaws, yet is one of the only people in this film who never lets race cloud his judgment. We discover that Danny s mentally ill wife is a racist, but those traits don’t seem to rub off on him. When Danny and Jesse are teamed up as partners, the viewer is expecting your standard “mismatched buddy cop” formula with a lot of racially-motivated tension between the two characters, but surprisingly, they both get along perfectly fine for the entire film! Detroit 9000 tackles a lot of these issues with moments of satire and quirky humour, one of the highlights being when Danny appears on a local TV show called “Buzz the Fuzz”, where angry citizens can call in and yell at the cops! The film’s quirky tone is established in the opening heist sequence, where a gospel singer croons throughout the entire caper in order to keep everybody at ease.

Detroit 9000 certainly lives up to its title by making great use of its city s locations, which enhances the film’s grungy atmosphere and adds some authenticity to the proceedings. The backstory behind the making of this film is also quite fascinating as it was made with the full support of Detroit police commissioner John Nichols. At the time, Nichols was actually in the midst of a campaign to run for mayor, but was defeated by Coleman Young, the first African-American mayor in Detroit history. That makes the movie’s portrayal of Congressman Aubrey Hale Clayton all the more interesting since the character is eventually revealed to be a total sleazebag (and lousy sexual performer!) and one has to wonder if Nichols had any influence over this. It’s also worth noting that Commissioner Nichols has a brief cameo as himself during the “Buzz the Fuzz” sequence and probably deserved to lose the mayoral race on the basis of his laughably atrocious acting! Nichols’ cameo is just one of the many cheesy, unpolished moments to be found in Detroit 9000, but strangely, they are also part of the film’s charms. If you don’t care much about looking for hidden meanings or political overtones in Detroit 9000, you’ll probably still find it to be an entertaining blaxploitation picture. Even if you think the story’s midsection is too plot-heavy, the film roars back to life for a tremendously exciting and ultra-violent climactic chase/shootout between the cops and thieves. In a way, it almost resembles the big shootout in Michael Mann’s Heat, except that it takes place in the ghetto of Detroit. The film also throws in a neat surprise twist at the end and offers a surprisingly ambiguous ending. It’s easy to see why Quentin Tarantino would like Detroit 9000 because even though it’s never going to win any awards, it knows how to deliver the goods to its audience and is willing to go the extra mile to be a bit better than the genre requires. If you’re like me and your personal tastes are pretty much in synch with Quentin Tarantino’s, you’ll probably like Detroit 9000.