Robin’s Underrated Gems: Out for Justice (1991) 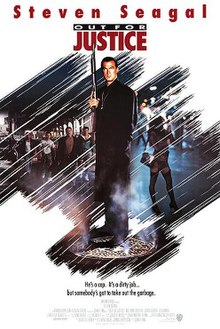 In this week’s upcoming Shouts from the Back Row podcast, we will be discussing the recent cinematic trend of aging action stars and how the popularity of The Expendables films and the power of nostalgia is allowing the likes of Sylvester Stallone, Arnold Schwarzenegger, Jean-Claude Van Damme and Dolph Lundgren to continue to make action films into their fifties and sixties. However, one action star who has mostly stayed away from the trend is Steven Seagal. While he delivered a fairly self-deprecating turn as the villain in Machete, he has mostly stayed away from the action genre in recent years and been more focused on his reality series, Steven Seagal: Lawman. I’ve done “Robin’s Underrated Gems” columns on the works of many other action stars, but I’ve yet to touch Mr. Seagal. But then… there really isn’t a whole lot to work with. Seagal’s best movies are probably Under Siege and its sequel, Under Siege 2: Dark Territory. His debut film, Above the Law, is pretty decent as well, as is Executive Decision, but of course, it benefited from killing off Seagal in the first 45 minutes and letting Kurt Russell take the reins. Believe it or not, there was once a time when Steven Seagal had credibility as an action star, but he pretty much threw it all away with his directorial debut, On Deadly Ground, and his ill-advised belief that climaxing an action film with a long speech about the environment was a good idea. However, one Steven Seagal film that I would actually champion as an underrated guilty pleasure is his ultra-violent 1991 outing, Out for Justice. This is a very simplistic revenge story which is totally indefensible on any level, but how can you dislike a film with a trailer where the late, great Don LaFontaine says: “In this neighbourhood… someone’s got to take out the garbage!”?

Out for Justice opens with a famous quotation from playwright Arthur Miller about growing up in the tough neighbourhoods of Brooklyn. I guess this is supposed to give off the impression that the film has some depth or something, but it s probably the only time you’ll ever be able to link Steven Seagal and Arthur Miller together. This film does indeed take place in the tough neighbourhoods of Brooklyn, and its hero is Gino Felino (Steven Seagal), a former punk kid who grew up to become a cop. Of course, many of Gino’s other childhood friends and associates did not take the straight and narrow path. One of them is a wannabe wiseguy named Richie Madano (William Forsythe), who shoots Gino’s partner in broad daylight while he’s shopping with his wife and kids. Richie is such an evil psychotic crackhead that he also decides to blow the brains out of a random female motorist while leaving the scene.

I’d write a longer plot summary, but there’s really not much more to it than that. Gino swears revenge on Richie for the death of his partner and then goes around Brooklyn looking for him. And that’s about it. There’s even a montage of Gino searching around town to the tune of the Beastie Boys’ “No Sleep Till Brooklyn”. From what I can gather, the central message of Out for Justice seems to be that cops in Brooklyn never have to worry about due process, warrants, or rules of any kind. It’s a common trope for action movies like this to have an angry police captain who yells at the hero for playing by his own rules and yanks him off the case. But in Out for Justice, Jerry Orbach has a small role as Captain Donziger, the most laid-back authority figure in cinema history. Right from the outset, Gino pretty much announces that he’s not going to arrest Richie for his partner’s murder: he’s going to kill him! And Donziger’s is response is practically: “Yeah, go ahead, do whatever the hell you want”. Seriously, Gino spends the whole movie harassing people and leaving a body count all over Brooklyn, and his captain doesn’t seem to mind one bit! He even visits Richie’s parents and flat-out tells them that he’s planning to kill their son, and later arrests Richie’s honest, hard-working dad (played by Dominic Chianese of The Sopranos fame) for no reason in an attempt to lure Richie out into the open. Yeah, I’m pretty sure that’s not legal. One of the funniest scenes in this film is when Gino invades a pool hall owned by Richie’s brother. He winds up using cue balls to knock out the patrons’ teeth before getting into a pool cue fight with a guy named Sticks.

However, as silly as Out for Justice may be, it s weirdly entertaining fun. The film was directed by John Flynn, who made one of the quintessential cult revenge movies, Rolling Thunder, and specializes in satisfying, over-the-top violence. Out for Justice is a lot more bloody and gruesome than your average Hollywood action film and actually had to be cut to avoid receiving an NC-17 rating. The screenwriter here is David Lee Henry, who previously wrote the Patrick Swayze cult phenomenon, Road House, and that should tell you everything you need to know right there. Out for Justice seems to exist in the same universe as Road House, where the rules of the real world and normal human behaviour don’t apply, and the plot only exists as an excuse for macho men to senselessly beat the crap out of each other. Another similarity between the two films is that they’re both as funny as hell, and you’re never quite sure whether or not the humour is unintentional. When you watch this scene between Gino and Richie’s sister (played by Gina Gershon), you really wonder if the ridiculous dialogue (“How ya doin’, Patti?” “I can still get it wet. How about you, Gino?”) was supposed to be funny.

Intentional or not, Out for Justice is a film that always manages to make me laugh a lot. In fact, sometimes, I’m not even sure why I’m laughing. I have no idea if this is supposed to be a running gag, but there seems to be an awful lot of scenes in this film featuring bad guys moaning in agony. In this particularly violent fight sequence inside a deli, Gino uses a meat cleaver to pin a guy’s hand to the wall. You can hear the guy screaming in pain in the background throughout the entire scene and I’ve always found this to be hilarious, for some reason.

The movie has a subplot where some douchebag throws a puppy in a garbage bag out of his car, but Gino rescues the dog before eventually tracking the guy down at the end and kicking him in the crotch. The way the guy keeps moaning “My balls! My balls!” as he’s rolling on the ground just kills me every time.

But the most laugh-out-loud moment in the film has to be when Gino blows off a bad guy s entire leg with a shotgun. Throughout the rest of the scene, you can hear this guy in the background screaming “OOOH, YOU TOOK MY FUCKIN’ LEG!!” as if he had just stubbed his toe or something!

Out for Justice features what may be the closest thing to an ambitious Steven Seagal performance. He sports a laughable Italian accent and even gets to spout a couple monologues where he reminisces about his childhood in the neighbourhood. It s almost like Seagal is trying to instil some depth into his character, but in the end, it’s probably best to just ignore all that stuff and enjoy Out for Justice as a mindless action-comedy. It moves at a fast pace and delivers plenty of entertaining action sequences, and its colourful Brooklyn setting and characters add a lot of energy to the film. William Forsythe is a wonderfully hateful villain as Richie, though his beer gut pretty much indicates that he won’t be much of a match for Gino at all. The final fight scene between them is hilariously one-sided, but still very satisfying. Indeed, Gino is pretty much an invincible badass here and that was always one of the biggest flaws of Steven Seagal’s films: the guy almost NEVER showed any vulnerability, as the bad guys were rarely allowed to get any sort of upper hand on him. As Seagal’s career went on, his fight scenes became a complete joke since they pretty much consisted of the overweight star standing around and letting bad guys run into his fist. But for whatever reason, Out for Justice just seems to fit Seagal’s persona well, so it’s definitely one of his more entertaining films. I exactly wouldn’t go far as to call it “good”, but it is a very fun way to kill 90 minutes. At the very least, you’re going to have a lot of laughs watching it and if you’re a fan of the over-the-top silliness that was Road House, chances are you’ll like Out for Justice as well.

Cheap plug alert: to learn about Steven Seagal’s greatest career performance, check out my Cracked column about his appearance in “The Celebrity Guide to Wine”.