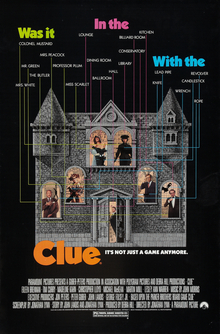 We always love to complain that Hollywood has run out of ideas, but one of their most groan-inducing announcements came several years ago when Hasbro and Universal Pictures signed an agreement to produce a bunch of films based on Hasbro board games. Thus far, we’ve seen less-than-stellar screen adaptations of Battleship and Ouija while film versions of such properties as Monopoly and Candy Land have been stuck in development hell. Needless to say, taking iconic board games and trying to turn them into feature films seems like an endeavour which is destined to fail, but this is not the first time such a thing was attempted. In 1985, Paramount Pictures and Parker Brothers teamed up to make a screen adaptation of the popular board game, Clue. At the time, the idea of adapting a board game seemed pretty bizarre, but given that Clue is based around solving a murder mystery, the idea did lend itself to the cinematic medium. In case, by some miracle, you’ve never played Clue, the premise involves a murder being committed inside a mansion and the object of the game is to determine which of the game’s six characters committed the murder. You also have to correctly guess which of the six weapons they used and which one of the mansion’s nine rooms the murder took place in. It’s a pretty simple concept, though one that might seem more suited to a stage play than a film. However, everyone involved in the screen version of Clue did their damnedest to make the whole thing work. Clue was always a childhood favourite of mine and as I grew older, I was surprised to learn that the film was a commercial and critical flop when it was originally released. However, Clue has since built up a cult following and given its limitations, it’s surprisingly entertaining.

The story takes place in New England in 1954 and, of course, most of the action is situated inside a large secluded mansion. The butler, Wadsworth (Tim Curry), has invited six people to a dinner party and they will spend the evening going by a pseudonym in order to protect their real identities. The guests do not know each other, but the one thing they have in common is that they are each being blackmailed about a dark secret they harbour. The characters include:

-Mrs. Peacock (Eileen Brennan), the wife of a prominent senator who has been taking bribes in exchange for her husband’s vote
-Professor Plum (Christopher Lloyd), a United Nations psychiatrist who has had scandalous affairs with his patients
-Mrs. White (Madeleine Khan), a widower suspected in the unsolved disappearance and murder of her previous husbands
-Miss Scarlett (Leslie Ann Warren), who runs a prominent brothel and escort service in Washington, D.C.
-Colonel Mustard (Martin Mull), a frequent customer at Miss Scarlett’s brothel who also happens to be a war profiteer
-Mr. Green (Michael McKean), a state department official who is a closet homosexual

Given that this is the era of McCarthyism, these secrets would absolutely destroy these people, but their mysterious blackmailer, Mr. Boddy (Lee Ving), has also been invited to the dinner party. It isn’t long before the six guests each find themselves with a weapon in their possession: a revolver, a rope, a knife, a wrench, a candlestick, and a lead pipe. If you’re familiar with the game, no points for guessing what happens next…

Yes, Mr. Boddy winds up dead and the murder mystery is set in motion. However, the story becomes a lot more complicated and Mr. Boddy is not the only victim. Over the course of the evening, a bunch of other characters wind up dead and it turns out that each of these victims had incriminating information about at least one of the guests. The whole movie basically consists of Wadsworth and the six suspects searching around the house and trying to figure out who the murderer is. Yes, the movie has a pretty gimmicky premise, but at least it’s pretty upfront about it. In fact, there’s literally a line of dialogue where Wadsworth says: “We’re trying to find out WHO killed him, and WHERE, and with WHAT!”.

Clue makes the wise decision to present this material in the form of a screwball comedy. The story is built around a legitimate whodunit, the film manages to spoof the genre at the same time. Clue was the directorial debut of Jonathan Lynn, who found fame in Great Britain by creating the Yes, Minister TV series, and teamed up with John Landis to co-write the screenplay. Like I stated earlier, this is ordinarily the type of material that is normally better served as a stage play, but it works surprisingly well as a film. The mystery plot is pretty thin and relies heavily on contrivances, but the script contains a lot of clever dialogue and visual gags, which are performed with pitch-perfect timing by the cast. The movie has a lot of fun with the conventions of the murder mystery, especially when the second act comes to a close. With several now people dead, Wadsworth just flat-out says: “Very well… I know who did it!”. He then spends the entire third act of the film literally just running from room to room while he rehashes the events of the evening and unravels the plot. Under normal circumstances, bombarding the audience with this much exposition would be death, but when you get Tim Curry to do it, how could it not be entertaining?!

As if Clue wasn’t gimmicky enough, the filmmakers attempted a unique idea for its theatrical run: they shot three different endings for the film and arranged for different endings to be shown at different theatres. A fourth ending was even shot, but not used after the filmmakers deemed it too dark. Obviously, this type of gimmick wouldn’t work in today’s spoiler-laden era, but it would have been a surreal thing to experience in a pre-Internet 1985. Imagine seeing the film and believing that one character was the murderer, only to bump into someone who saw the film with a different ending and believed that someone else was the murderer. Of course, the “multiple endings” gimmick probably explains the contrived nature of the screenplay as the writers had to ensure that each plot point would fit together with each different ending. The studio probably hoped that people would be compelled to see Clue multiple times to experience each different ending, but given the lackluster box office numbers, that philosophy obviously didn’t work. When Clue was released on home video, all three endings were included. As strange as it sounds, the movie actually seems to work best when three different endings are shown in a row as it fits the screwball nature of the story. It’s probably not surprising that a remake of Clue has been in development for the past several years, but has never gotten off the ground. Even so, if Hollywood still insists on adapting properties like board games to the screen, they should hold up Clue as a model for how to do it. The movie flawed, to be sure, but it doesn’t take itself seriously and is genuinely funny. It’s clear that the filmmakers and the cast were trying as hard as they could to make an entertaining comedic whodunit and didn’t want the project to be nothing more than a cheap cash cow. Clue is a prime example of a concept which shouldn’t have worked, but does so through sheer willpower.