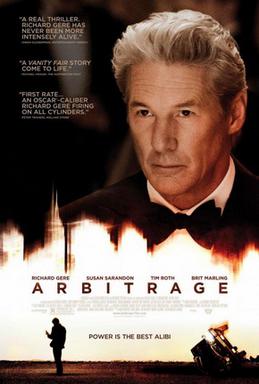 In one week’s time, the nominations for the 87th Academy Awards will be announced and it’s always fun to ponder which deserving films will be unfairly snubbed. However, it’s also interesting to ponder which deserving films will not only get snubbed, but completely fade from public consciousness. A prime example of this might be the drama-thriller, Arbitrage, which was released in 2012. At the time, there was some buzz that this film would garner some Oscar recognition, particularly for its acclaimed lead performance from Richard Gere, who had never received a nomination in his career. Alas, Arbitrage was completely shut out by the Academy and quickly became an afterthought. That’s not to say the film wasn’t a success. It garnered a lot of critical praise, a Golden Globe nomination for Gere, and did pretty well financially. Arbitrage had a pretty good per-screen average in its limited theatrical run and a video-on-demand gross of over $14 million, which remained a record until the recent release of The Interview. Yet here we are only two years later and Arbitrage seemed to be a forgotten footnote, which is a shame since it’s an uncommonly intelligent thriller with an extremely compelling antihero at the center of its story.

The protagonist in Arbitrage is Robert Miller (Richard Gere), a wealthy manager of a multi-million-dollar Wall Street hedge fund. Robert seems very close with his wife, Ellen (Susan Sarandon), and daughter, Brooke (Brit Marling), who works as her father’s CFO and idolizes him. Robert is also close to a merger arbitrage with another company which will allow him to sell his hedge fund and make a nice profit. However, the merger is highly illegal because Robert has lost over $400 million on a bad investment deal and is fraudulently cooking his company’s books to hide the loss. If the merger doesn’t go through or Robert’s fraud is discovered, he faces major jail time and will lose everything. Robert’s situation becomes even more precarious when he gets into a late-night car accident alongside his younger mistress, Julie (Laetitia Casta), killing her instantly. Knowing that this accident will garner him unwanted publicity and potentially bring an end to his important merger, Robert decides to flee the scene. He seeks the help of Jimmy (Nate Parker), the loyal son of Robert’s deceased former driver, to pick him up and drive him home. The accident draws the attention of a hot-headed detective named Bryer (Tim Roth), who seems to be at his wit’s end at watching rich people get away with crimes and is bound and determined to prove that Robert was behind the wheel of the car.

Arbitrage is the feature-film debut of Nicholas Jarecki, who had previously made documentaries, and the whole thing is very well-written and directed for a first-time filmmaker. Jarecki has his work cut out for him by making his story’s protagonist a Wall Street hedge fund manager since they have obviously been very easy people to dislike since 2008. Robert Miller fits the traditional profile as he unwisely plays games with other people’s money and has no qualms about committing serious financial fraud and lying to everyone to cover his ass and get what he wants. Yet Robert does not seem to be a complete sociopath, as he is capable of doing good things for people and genuinely believes that all of his illegal actions are necessary. Robert’s rationale for fleeing the accident scene is that his family, employees and investors could lose everything if this unfortunate turn of events jeopardizes his company’s merger. Antiheroes like Robert Miller toe a fine line between sympathy and contempt, but that actually works in the story’s favour. If you sympathize with Robert, you’ll want him to get away with his misdeeds, but if you dislike him, you’ll garner some enjoyment at seeing his intricate web of lies fall apart. Jarecki really piles it on for his protagonist, as Robert simultaneously has to deal with covering up his accident and preventing his merger from falling apart. Even worse, Brooke eventually discovers her father’s financial fraud and even as he tries to convince her it was for the greater good, Robert has to watch his daughter’s admiration for him vanish.

This may be the best performance of Richard Gere’s career and the actor does a stellar job at creating a complex, three-dimensional antihero who is easy to both like and hate. I never used to be the biggest Richard Gere fan, but in Arbitrage and the equally underrated The Hoax, the actor shows him to be quite adept at playing characters who have to face the serious consequences of concocting elaborate lies. The entire cast in Arbitrage does a first-rate job, particularly Susan Sarandon, who creates a memorable portrait of a dutiful wife who is willing to put up with her husband’s lies until he crosses the line, and Tim Roth, who is so desperate to bring a corrupt rich guy to justice that he is willing to cross his own lines. Some of the most compelling material involves Detective Bryer’s attempts to railroad Jimmy and coerce him into testifying about Robert. Since Jimmy seems to be a genuinely good kid and Bryer comes off as unlikable asshole who thinks it’s okay to break the rules in order to justify the means, it’s not to hard to see why some viewers might root for Robert to get away with it. In the end, Arbitrage does not betray its characters and delivers what is probably the most logical and satisfying conclusion for this story. It’s a shame that Arbitrage never got any recognition at Oscar time, as at the very least, Richard Gere was probably deserving of a nomination. However, the film is well worth checking out. Arbitrage perfectly demonstrates why the most compelling thrillers are not driven by the machinations of the plot, but the actions of the characters.