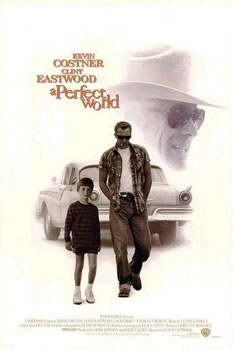 It goes without saying that Clint Eastwood has built himself one of the most unparalleled film careers of all time. After becoming one of the world’s most famous movie stars, Eastwood was not content to spend the rest of his life coasting on his laurels and decided to try his hand at directing in the early 1970s. After nearly 45 years, Eastwood has somehow made just as big a mark on cinema as a director than as an actor. He has helmed over 30 films, two of which have won Academy Awards, and has shown no signs of slowing down at age 85. Generally, Eastwood’s directorial efforts involve him either portraying the lead character, or staying behind the camera and not acting in the film at all. There’s only one Eastwood-directed project in which he made the unique decision to cast himself in a supporting role. In 1993, after taking home “Best Director” and “Best Picture” Oscars for Unforgiven, Eastwood decided to select A Perfect World, a spec script written by John Lee Hancock (future director of The Blind Side and Saving Mr. Banks), as his follow-up project. The star of the film would be Kevin Costner, who was three years removed from taking home his own “Best Director” Oscar for Dances with Wolves. Eastwood was initially content to stay behind the camera and not appear in A Perfect World until Costner convinced him that he would be the perfect choice to portray a key character. The end result is one of the more underrated and forgotten films of both men’s careers.

A Perfect World takes place in Texas in 1963, and starts off with two career criminals named Butch Haynes (Kevin Costner) and Jerry Pugh (Keith Szarabajka) escaping from the Huntsville state penitentiary. They soon wind up in the home of the Perry family, where three children are being raised by a single mother. Butch and Jerry decide to take the boy of the family, eight-year old Philip (T.J. Lowther), as a hostage before fleeing. Word soon spreads to a local Texas Ranger named Red Garnett (Clint Eastwood), who is given the task of apprehending the two escaped convicts and recovering Philip safely. Red will be accompanied on his manhunt by Sally Gerber (Laura Dern), who works as a criminologist during a time period where female criminologists are looked at quite strangely. A trigger-happy FBI sharpshooter named Bobby Lee (Bradley Whitford) also joins them and it’s clear that he is very anxious to put bullets into the fugitives at the first opportunity. While it’s apparent that Butch would not harm Philip, Jerry is clearly an unhinged psychopath who seems capable of molesting his young hostage. As a result, there is a lot of tension amongst the trio during their time on the run.

Not surprisingly, a bond eventually emerges between Butch and Philip. On the surface, A Perfect World appears to compendium of cliches from several different genres, including the road movie, the buddy picture, and the hostage thriller. However, the material is a lot more complex than it first appears, as Eastwood has rarely ever been interested in directing formulaic stories. It’s established that Philip’s mother is a devout Jehovah’s Witness and when we are first introduced to the family on Halloween night, she refuses to allow Philip to go trick-or-treating. Butch becomes angered when he learns that his young captive has been doomed to a strict childhood in which he is forbidden to have any fun, so he decides to turn the hostage situation into an adventure for Philip, allowing him to eat junk food and wear a Halloween costume for Casper the Friendly Ghost. We learn that Philip’s father abandoned their family and that Butch also grew up with an absentee father, so of course, he becomes a mentor to the boy, who begins to see Butch as the father figure he never had. However, even though Butch comes off as a likable antihero on the surface, the movie does not try to sugar-coat the fact that he is a violent criminal. In the movie’s most intense scene, Butch befriends a family at a farmhouse, but reacts badly when he sees the father slapping his son. Philip becomes horrified by the possibility that his new father figure might be capable of cold-blooded murder.

Even though the underlying material for A Perfect World makes it sound rather dark and depressing, it does have a surprising undercurrent of humour. Believe it or not, Clint Eastwood essentially turns himself into the movie’s comic relief. If the entire film had been told from Butch and Philip’s point-of-view, it might have become too much of a downer, but the story frequently cuts away to the police pursuit, which contains its fair share of absurdist comedy. Red winds up commandeering a large airstream trailer which has been constructed for the Governor of Texas and a bunch of crazy shenanigans ensue when the cops use the trailer to chase down Butch. (In a darkly comic piece of real world foreshadowing, Red is told this trailer is going to be used as transport for President Kennedy when he visits Texas in a few weeks.) We learn that Red busted Butch for a minor crime when he was a teenager and gave him an unnecessarily harsh sentence, so Red feels somewhat responsible for Butch’s descent into a criminal career and the tragic hostage situation at hand. This is the only film Eastwood has starred in during the past 45 years in which he did not receive top billing and his amount of screen time is an uncharacteristically low 40 minutes.

A Perfect World is a unique piece of cinematic trivia in that it’s one of the only occasions where two Oscar-winning directors have acted together in the same film. (Another example of this would be Roman Polanski and John Huston in Chinatown, but Polanski’s role there was nothing more than a cameo.) Eastwood is content to step into the background and allow Kevin Costner and T.J. Lowther to be the stars, and the duo has good chemistry together. Philip is not your stereotypical cute movie kid, as being raised by such a strict family has clearly stunted his social skills. However, Lowther does a great job of conveying Philip’s emotional growth during the course of his hostage experience, which is especially remarkable since the kid was only six years old when the movie was filmed. This also represents one of the best performances of Kevin Costner’s career, as he finds the perfect balance between making Butch into both a likable and frightening character. Even though A Perfect World got positive reviews, it failed to make much of an impression at the box office. In spite of featuring two of Hollywood’s biggest stars, the film pretty much faded into obscurity. However, this might be just an indicator of how strong Clint Eastwood’s body of directorial work is. He has directed so many acclaimed films over the past 25 years that it’s easy to see why a solid effort like A Perfect World might slip through the cracks. It remains one of the most overlooked titles in Eastwood’s filmography, but is well worth checking out.