Posted on September 19, 2015 by castordurden

The cover artwork is a hissing cat hovering over witch’s fingernails and the assumption of supernatural chicanery isn’t entirely unfounded. While this occult thriller can be lumbering and devoid of shivers, it is nevertheless ticklish, byzantine escapism. Frankly, the bait-and-switch of Margaret (Katharine Ross) and Pete’s (Sam Elliott) swooning romance (with picnics along the English countryside) is a convincingly tranquil slice of Nicolas Sparks infatuation. Lending his mustache and swaggering macho gravitas to the cryptic proceedings, the seethingly paranoid Elliott scowls at the slightest hint of conspiracy (his glance is askew at an astronomical advance sum for their interior design overseas).

Richard Marquand sprinkles a breadcrumb trail of oddities and red herrings (ex. A fully furnished bedroom upon the couple’s inopportune arrival). A gratuitously titillating shower scene for the ladies of Elliott is interrupted by scolding hot water. Known mostly for the band The Who, Roger Daltry doesn’t outstrip himself of his rock-star image and his character, Clive, might as well be vacationing during an international musical tour. Either way, kudos to the script for not skimping on its own cockamamie nature.

The ring being bequeathed to Maggie is undeniably frightening with the disembodied voice of Jason Mountolive beckoning from behind a hospital veil. Although, Mountolive’s decrepit makeup is eerily similar to Troma’s Toxic Avenger.  Neither Maggie nor Peter are nonplused by accumulating loopy behavior and it only supports the tongue-in-cheek attitude. At one point, Elliott is nearly struck by an errant crossbow arrow and he remarks, in his typically baritone manner, “Maybe you should stick to darts”. The major component that propels the film to modest success is the jaunty chemistry between real-life duo, Elliott and Ross. Normally the off-screen sparks don’t translate to celluloid (ala Ben Affleck and Jennifer Lopez) but they truly register as an inseparable couple. 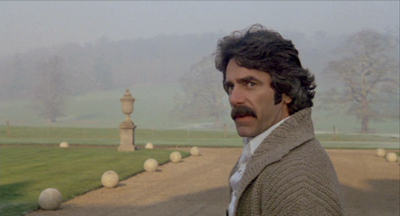 The whodunit aspects are transparent to a fault but it doesn’t treat black magic and Satanism with direness. Daltry’s recruitment speech to the dark arts is quite flippant in a Monty Python way (“It’s a different way of life really. We don’t ride on broomsticks.”). By the ending credits, the prophesy has been fulfilled and those still intact are not merely grateful but surprisingly felicitous about the possibilities of the heir’s powers. On its own ingratiating merits, The Legacy is a lighthearted romp in devil worship.