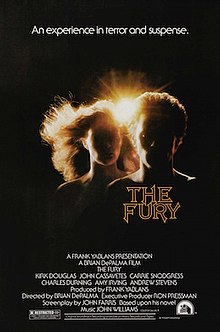 If you want a prime example of a director doing multiple films about a strangely specific subject, just look at the early career of Brian De Palma, who did consecutive movies which featured teenage girls with telekinesis. In 1976, De Palma already had some notable films under his belt, like Sisters, Phantom of the Paradise and Obsession, but his first major hit was his screen adaptation of Stephen King’s novel, Carrie. De Palma’s ultra-stylish interpretation of King’s material worked so well that even the author himself conceded that the adaptation improved upon his original story. Sissy Spacek and Piper Laurie also wound up getting Academy Award nominations for their performances in Carrie, which was pretty much unheard-of for a horror film at that time. It’s possible that Carrie’s success compelled De Palma to seek out another story featuring teenagers with telekinesis and he wound up selecting John Farris’ novel, The Fury, as his follow-up project. To be fair, in spite of the whole telekinesis thing, Carrie and The Fury are drastically different films, as The Fury is more of an action-thriller which just happens to have some horror elements. It’s also got an incredibly goofy and ridiculous storyline which doesn’t hold up much under scrutiny, but De Palma infuses the material with his trademark style and energy and makes it entertaining.

The Fury’s protagonist is Peter Sandza (Kirk Douglas), a former agent for some secret intelligence organization associated with the CIA. He also happens to have a teenage son named Robin (Andrew Stevens) who possesses some powerful psychic abilities which includes telekinesis. As the story opens, one of Peter’s fellow agents from the organization, Ben Childress (John Cassavetes), double-crosses him and attempts to have him assassinated. Childress then tells Robin that his father is dead and takes over the task of raising him, which involves enrolling Robin in a secret government program for the purposes of harnessing his psychic powers and turning them into weapons. However, Peter survives the assassination attempt and makes it his mission to recover his son. Meanwhile, another teenager named Gillian Bellaver (Amy Irving, who played the title character’s sympathetic classmate in Carrie) is also discovering that she has powerful psychic abilities. Gillian and Robin both have problems controlling their telekinetic powers and can easily use their minds to harm anyone who angers or provokes them. Gillian seeks help at an institute which also happens to controlled by Childress’ organization and he expresses interest in recruiting Gillian for his program. Once Peter learns of Gillian’s existence, he hopes to use her to lead him to Childress in order to rescue his captive son.

In Carrie, telekinesis served as a none-too-subtle metaphor for teenage repression. In The Fury, it serves as a metaphor for… well, I’m not really sure, exactly. In the film, Gillian and Robin start off as confused teenagers who are unable to control their powers and inadvertently use them to do things like causing nosebleeds for people they don’t like. However, the more they are manipulated by the government programs attempting to control them, the more unstable the two teenagers become and they eventually reach the point where they are capable of using their powers to kill people. The narrative for The Fury is all over the map at times, as John Farris (who adapted the screenplay for his own novel) wants his story to be too many different things. For the first 45 minutes or so, The Fury is a fairly straightforward action-thriller and the psychic stuff is pretty much kept on the backburner. This section of the story mainly focuses on Peter’s attempts to elude Childress and his agents, but it has a totally different tone than the rest of the film. When Peter finally does reunite with his son near the end of the film, the payoff is laughably anticlimactic, almost as if Farris just got bored of that particular story arc and wanted to resolve it as quickly as possible. However, all is forgiven after the final scene. If there’s one example of an ending which completely redeems all the movie’s other flaws, it would be the ending of The Fury, as *SPOILER ALERT* Gillian uses her psychic powers to literally make Childress EXPLODE into a million pieces!

As far as I’m concerned, that is still the greatest villain death scene in cinema history. In spite of its many narrative problems, it’s impossible to dislike The Fury because it is no damn entertaining. Some of Brian De Palma’s critics have accused him of being nothing more than a Sir Alfred Hitchcock wannabe, but I’ve always believed that De Palma was a master at borrowing ideas from other filmmakers and finding unique ways to build upon them with his distinctive directorial style. When De Palma is at the top of his game, he does a marvellous job at conveying the pure exhilaration and joy of cinema, even if the material itself is rather silly. For example, The Fury contains a sequence where Peter leaps out of his hotel room window and is chased across elevated train tracks while clad only in his boxer shorts before he disguises himself as an old man and hijacks a police car (driven by a young Dennis Franz in his film debut) to escape his pursuers. Like I said earlier, these set pieces don’t quite match the tone of the rest of the film, but they are directed with flair, energy and a nice tongue-in-cheek sense of humour. Another standout sequence is when Gillian escapes from the institute. In other hands, this could have been a fairly conventional action sequence, but De Palma directs the whole thing in slow motion while John Williams’ epic score plays in the background. The whole thing is overwrought, to be sure, but it’s exhilarating to watch. The Fury is not one of Brian De Palma’s most well-known films and it’s far from his best, but it’s a prime example of a fun, stylish film where you can just turn off your brain and enjoy the ride. And, oh yeah, you get to see John Cassavetes blow up into a million pieces too!