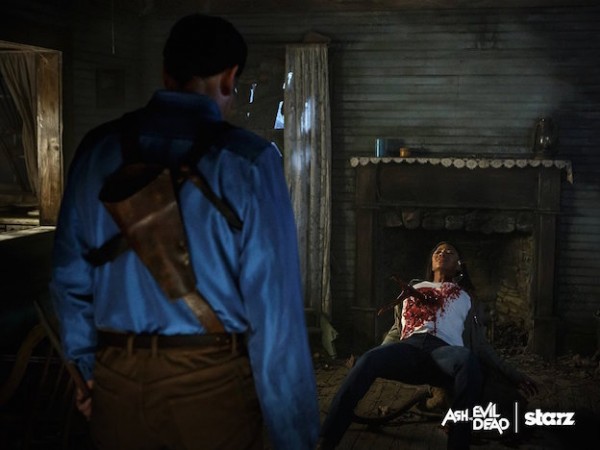 For my Christmas gifts this year, I received a lot of special and deluxe editions of my favorite TV shows and movies (Scream Factory’s release of Ghost Story, The X-Files: Season 1 blu-ray, Caligula: The Imperial Edition, etc.). But the most apropos present may have been the 25th anniversary edition of Evil Dead 2. The timing couldn’t be better to watch the gonzo roots of the franchise and then dive headfirst into the penultimate episode of its TV counterpart.

In a recap, Ash’s love interest, Amanda, was bid a bittersweet farewell in the last episode by Evil Ash. And now Ash must mightily contend with his most esoteric foe: himself. To prove that Ash is actually who he says he is, Ash shouts racial epithets towards Asian babies. The quirkiest indication of Ash’s laissez-faire attitude is when he extrapolates that Kelly and Pablo shoot them both in order to conclusively end all of the Deadite contretemps. Clearly, Ash would suggest this because he always prefers “the easiest way out.”

Ash might be a clueless ignoramus however he has the clairvoyance to hastily julienne his clone (“Just the Two of Us” is an exuberantly funny touch) and Amanda before they return to reanimated terror. He also guides the backpackers away from the cabin before they are victimized by the airborne virus.

As per usual, Amanda isn’t anatomized in time and her Deadite alter-ego might be my favorite as she puppeteers the corpses into a taunting dialectic about Pablo and Kelly’s murky relationship. Finally, Ruby poisons the minds of Ash’s sidekicks with the revelation that Ash might be inadvertently culpable for the death toll as long as he still possesses the Necronomicon.

Just when the audience is certain that she isn’t the antagonist that we envisioned earlier, Ruby’s incantations begin to cause the dark-and-stormy pyrotechnics to swarm outside. The final line is an enormously breathtaking cliffhanger for who the ultimate ringleader is. The Kandorian dagger is obviously an impressive weapon against the Deadites and flaying the skin off the binding is a decadently gooey visual effect.

For Ash, the 30-plus years fighting the book still conjures some sentimental value for the lummox. The book’s statement that Ash will cease being a superhuman and just retrogress back to being a mundane stockboy isn’t a far-fetched prognosis. Until next week, the viewers will eagerly wonder how Ash can possibly save both Pablo and vanquish the remaining Knowby descendant.