Runstedler’s DVD Pick of the Month: What We Do in the Shadows

Posted on January 6, 2016 by curtisrunstedler 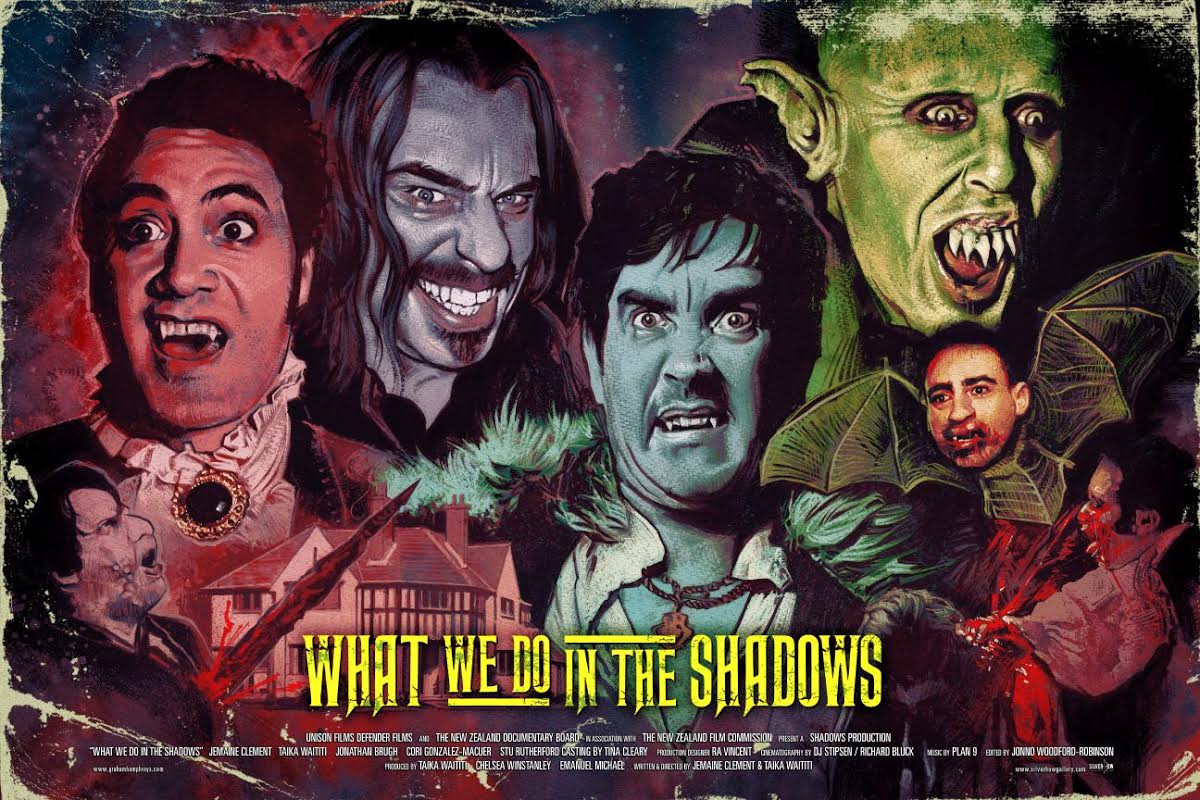 ‘Vakey, vakey, Petyr!’ Hats off to my amazing girlfriend Daisy for getting me into this! In the frenzy of recent vampire films such as Let the Right One In, the Twilight series , and more, What We Do in the Shadows emerges as an exciting addition to the vampire comedy film canon. It’s a parody in the vein of other horror/comedy classics such as The Fearless Vampire Killers with a healthy dose of This is Spinal Tap, and thus told in spectacular mockumentary fashion. Set in modern times New Zealand, the film tells of a group of vampires from across the ages who all live together: Viago, a flamboyant eighteenth-century vampire, Vladislav, a bat-shit crazy medieval vampire, Deacon, an ex-Nazi vampire, and Petyr, an ancient, Nosferatu-style vampire.

Despite their centuries of life experience, they are still clumsy and blundering, and the film chronicles their day-to-day lifestyle (hanging out, having house meetings, having awkward dinner parties and then killing their guests, etc.). At one such awkward dinner party, one of the guests Nick tries to escape and is unexpectedly bitten and blooded by the near feral Petyr (who sleeps in a tomb in the basement of their house). Nick decides to join their group, but they don’t really like him – I didn’t really like Nick either, he’s an idiot and tends to fuck things up. They really like his human friend Stu though. Anyway, the film satirises all aspects of vampire lore, from the Count Orlock style of Nosferatu to “The Beast” (you’ll have to watch the film to find out more) to the amusing rivalry between vampires and werewolves. For me, the film is just so fun and unpredictable that it’s a great thrill ride. The film also satirises the vampire’s assistant trope seen in Dracula and Let the Right One In, with Deacon basically making his assistant Jackie do everything for him without keeping his promise of blooding her. All the vampires really add something to do it, and the movie starts off on an exciting note, taking the mundane (a house meeting) and making it creative just because of its characters and premise (Viago knocks on Vladislav’s door and accidentally interrupts his weird orgy, and then tries to wake up Petyr, and when that doesn’t go so well, he gives him a rooster). The usual vampire tropes apply (death by sunlight, stakes and garlic suck, and they have to drink blood), but they’re explored in such hilarious and inventive ways, and that’s what makes this film so special.

It’s hard to tell you more without giving away the juicy bits, but I will say that the ending was great too, and I’m usually picky with endings (though they should have killed off Nick – what an awful character). Check out What We Do in the Shadows when you can – it’s got bite!