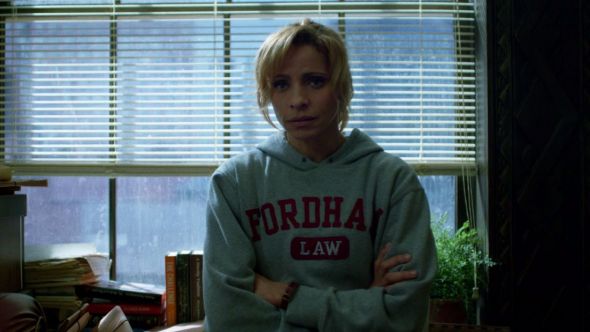 The Man in the Box

With Nobu’s return, the elixir to everlasting life is linked directly to vampire lore. I have to admit that I really like that slightly outlandish notion being wedged into this supposedly veracious environment. Now the intermingling of Iron Fist, Luke Cage, Jessica Jones and Daredevil into the Defenders spin-off won’t be so tonally jarring. Cell Block D is like a wing of the Arkham Asylum where the notorious nemeses of Batman call home. The source of Castle’s family’s murders in Central Park is finally revealed and instead of a malevolent plot against Castle, it is more tragically explained as sting-operation lack of judicious foresight. It wasn’t malice, it was human error which adds a dash of uncertainty to our complicity on Frank’s blood rampage.

Since the assailant wasn’t shown and because a stray bullet struck Foggy, I doubt that Castle was the culprit behind Reyes’ shooting. Since their fireworks in Season 1, we’ve been anxious to see Matt across from Fisk again. Proving that no shackles can really restrain him, Fisk is still utterly devoted to Vanessa and he bursts into flights of rage whenever she is threatened. D’Onofrio has a very juicy monologue about how he will spend more than “six dollars” to dismantle both Matt and Foggy when he is released.

Claire might be the token vessel of information and exhortation but the stellar, world-weary Dawson transcends that stereotype for a nurturing performance such as when she convinces Matt to stop preoccupying himself with the city’s woes and take a hiatus to visit his wounded friend. It may have been null and void but her motherly advice was estimable. Lost in the shuffle was Elektra’s exodus from New York which is a shame.

I’m perfectly capable of suspending disbelief but the ninja clan’s siege on the hopsital ward felt too chopsocky and shlocky in my opinion. Ditto goes for possessed children. At this juncture, it’s probably safe to prognosticate that the security detail for Karen are actually the men responsible for the recent shootings. Whenever someone is very accommodating and supportive, they’re usually bluffing. The chemistry between Matt and Karen is so torrid that it’s a pity she is being pawn in Castle’s mole hunt.

Foggy as a freelance agent is a stupendous step forward. He is no longer associated with his defunct law firm and this could be the nexus where he isn’t overshadowed by his superiors anymore. It’s astounding how amiable Foggy is this season as opposed to Season 1. He is equipped with nuance. Likewise, Bernthal isn’t a one-note, gravelly-voiced automaton. He can still be a chivalrous gentleman ala his diner conversation with Karen where he praises her choice of handgun and how it might”not [be][her] first rodeo”.

The ratio of Matt versus Daredevil is quite askew during the last few episodes and while I enjoy the visceral cocktail of the fisticuffs, I would be amenable to see Matt out of the uniform at this point. He feels like a guest star in his own series which only substantiates my animosity towards Season 1. The short bursts of squid-laden action (like the diner ambush) with Castle are preferable because he is a more ambiguous character and not just the vanilla center.

Other than his cranial bullet-wound X-ray, Castle still hasn’t acquired his trademark skull emblem yet. Like the cowl last season, I’m sure they’ll tantalize us with a penultimate reveal before the season finale. For his contribution, Joe Paesano’s throbbing composition feels very cinematic and James Newton Howard-esque. 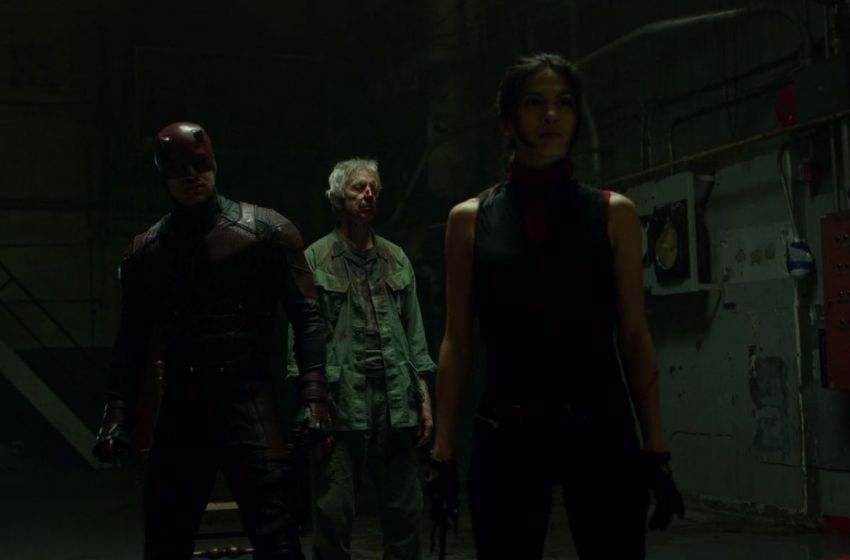 The Dark at the End of the Tunnel

For a man of his advanced age, Glenn is stunningly agile and sinewy. Also, I loved the Aaron Sorkin witticism when asked where he found Elektra, Stick replies “A box of Cracker Jacks.” Maybe it was budgetary but they shouldn’t de-aged Glenn via silhouettes like Nicholson in The Departed or CGI technology like Michael Douglas in Ant-Man. With stunt doubles galore, Glenn could be a member of Stallone’s Expendable cadre.

Binge-watching Daredevil doesn’t do the show’s myriad fights many favors since they all blend together despite the milieu changes. Karen’s indignation over the paper’s expose on Castle is rather redundant now (she is clearly an advocate for his brand of vindication) and her transformation to His Girl Friday is bit convenient considering Foggy’s tempting career move in the last episode.

Finally, the archenemy of Castle is unveiled and I, for one, am quite nonplussed that it was The Colonel behind it all. His motives are still very hazy though. I’m not looking for an expository monologue by him but a more coherent explanation would be appreciated. The folkloric torture with bamboo sticks under Stick’s fingernails really churned my stomach.

The answer to who the Blacksmith is has been conclusively given and it’s a whimper of flashbacks and underwhelming character developments. This episode supposedly ties up several loose threads but none of it resounds with a feeling of narrative fulfillment. 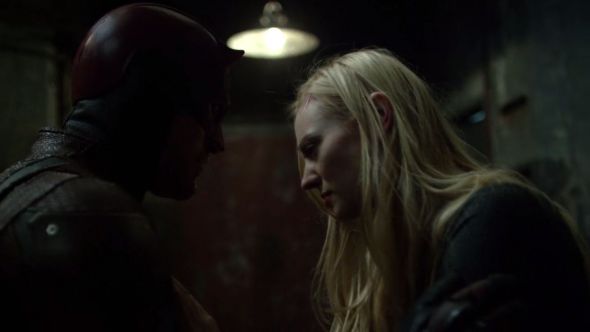 A Cold Day in Hell’s Kitchen

Instead of a rollout of epic proportions, Season 2 is winding down in a lackluster fashion. This season began preternaturally strong and it crested with D’Onofrio reprising his Fisk foe. Once Castle emancipated himself from the prison, the season began a steady downhill trajectory. The Black Sky plotline from last season was absurd and its no less palatable now.

Carrie Ann-Moss’s appearance lends credence to Netflix’s world-building plan within a Marvel Television landscape. Luckily, her proposal to Foggy doesn’t feel unnecessarily shoehorned in. The advent of the retractable billy club weapon tingles the nerve endings with its implementation against the Hand. Just as I predicted, the show panders us by materializing a spray paint can in Frank’s grasp so he could emblazon his logo on his Kevlar vest. It may be fan service but I can’t deny that I rhapsodized about it before it happened.

The inner turmoil in which Matt can’t contraindicate through the white noise of New York is finally being broached again. It is a slight afterthought after the tumult around the fringes. Elektra deflecting and lacerating in her traditional red-and-black garb littered me with goosebumps. It’s not imprudent to dress comic-book characters like their graphic-novel counterparts anymore.

“What if this isn’t the end? What if it’s just the beginning?” are melodramatic utterances that were coined eons ago and whenever they’re recycled, it smacks of a parody. Additionally, when superhero summarized their halcyon plans for retirement and self-exile, it will usually eclipse into darkness. When Elektra suggested a European getaway, her fate was sealed. The show-runner couldn’t conjure another spoke in the Daredevil wheel to fight except for a resurrected Nobu? And his punch was the catalyst for Matt’s mask to be removed for the tender farewell with Elektra?

For a show that was maturing earlier in the season, the finale regressed rather quickly into hokey sentimentality and plasticized cliches. There is also no catnip for next season. Despite these gripes, I’ll be on the rooftop ledge next to Daredevil when Season 3 premieres next year.