Posted on September 6, 2016 by castordurden

At the ripe age of 83, our intrepid chocolatier and curly-haired jester Gene Wilder passed through the factory gates. In his wake, he left us a trove of classics to cherish for years to come. From his Mel Brooks collaborations (‘Blazing Saddlers’, ‘The Producers’ and ‘Young Frankenstein’) to his teaming with Richard Pryor (‘Stir Crazy’ and ‘Silver Streak’), Wilder’s work will live on for eons. However, between the highs, Wilder also carve out a few other movies that went relatively unnoticed. In this article, I’ll focus on some lesser-popularized titles. The Adventure of Sherlock Holmes’ Smarter Brother (1975)– For his slipshod directorial debut, Wilder wove this comedic yarn about the black sheep of the deductive-reasoning family. Unlike Mel Brooks’ impeccable timing with a sight gag, Wilder and his DP mostly stage the visual punchlines with stagnation. Wilder’s fencing with a bicycle-operated clown contraption is an overcranked Benny Hill joke without the proper spatial blocking. Another fiasco of silliness is Marty Feldman’s tic of repeating himself until he is slapped. In theory and on paper, it may have been rib-tickling but in Wilder’s hands, it falls flat.

He also fashions other tasteless jokes about a professor with Tourette’s. Laugh reflexes are subjective but even random humor must either be grounded or nourished into some oddball rationality. In the title role, Wilder basically barks like a hyena and flaunts his intellectual arrogance like a badge of honor. He’s honestly quite unappealing. For someone who abhorred lavatorial humor, Wilder definitely enjoys weakly bawdy Freudian slips (“I saw your winkle on the door. Uh, I mean shingle.”). Since he is a fan of musicals, characters will do impromptu song-and-dance numbers without rhyme or reason. Overall, a pathetically unfunny, mercurial beginning for Wilder’s behind-the-monitor career. 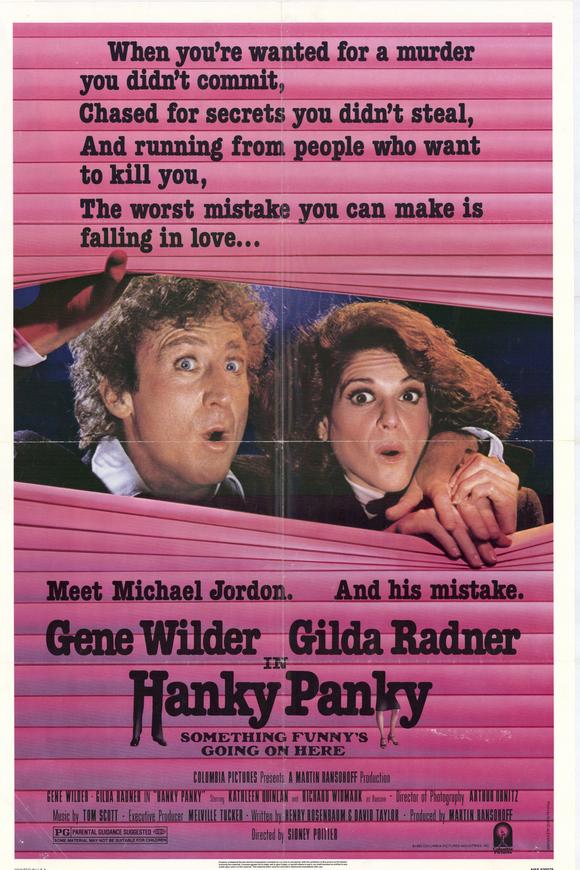 Hanky Panky (1982)– After their ribaldly hilarious hit ‘Stir Crazy’, director Sidney Poitier and Gene Wilder unraveled a new project for each other which also paired Wilder with his vaudevillian wife at the time, SNL’s Gilda Radner (although she doesn’t appear until 35 minutes in). It begins like a Hitchcockian murder mystery with a man awakening with a blood-dampened shirt and hanging himself. The scene itself is sloppily directed with no accentuating punch to the suicide. A bit disconcerting after Poitier successfully torqued the rodeo escape in ‘Stir Crazy’ for maximum suspense. Luckily, he rebounds back quickly. Next Robert Prosky is poisoned with two tainted olives in his martini. It’s actually a nifty switcheroo.

One thing that is refreshing is to see Wilder as a philandering womanizer when he brazenly coaxes Kathleen Quinlan into a midday one-night stand at his place upon meeting her in a cab. It’s an antipodal change-of-pace for the hopeless romantic Wilder to be the Cary Grant of this. With this being a Dashell Hammond-conspiracy send-up, it’s a given that the MacGuffin is shrouded in convoluted plotting. According to the press notes, Radner’s role was intended for Pryor until he balked. Frankly, this script was probably developed as a wickedly fun thriller until it was diluted into a companion piece with Wilder’s genre mash-up ‘Silver Streak’. The comedy routinely undermines the illuminait potboiler elements (ex. It broaches the nadir of lethargic rimshots when Wilder must masquerade as a magician and later he is clad in a woman’s dress). Nevertheless, it’s not an abject failure with the dalliance between Wilder and Radner being quite touching.

Haunted Honeymoon (1986)- By co-scripting with his production designer, Wilder basically had a viable storyboard blueprint before he began principal photography. Kudos to the carpentry and set dressing that went into the Gothic manor of the set pieces. With a breaking-the-fourth-wall murder victim, Wilder already shows a noncommittal attitude to Thalian construction. Instead of the slain servant repeatedly calling back the audience for another piece of information or his last dying words, Wilder abandons the conceit after one pass. Later on, he overindulges in an already fetid skit about a hard-of-hearing butler. Wilder is lampooning the radio chillers of the 40’s but his directorial prowess is tactless and the satire of the in-studio thunder-and-lightning sound effects was much funnier in Frasier’s Ham Radio episode.

The plot is a nonsensical one-joke excuse to scare Larry Abbot (Wilder) to death in order to solve his premarital jitters. The middling, trite jokes are spaced out and performed at a snail’s pace. While he is drowning in drag shtick, Dom DeLuise is not the scene-stealer of the film; that honor goes to a Jonathan Pryce showing an uncommon knack for sharp verbal comedy about his state of poverty. Wilder perfectly casts himself as a perpetual coward who scales the wall when he sees snakes or shadows. His pantomime with the butler’s legs as his own is a pretty priceless screwball sketch though. While I haven’t seen ‘The Woman in Red’ or ‘The World’s Greatest Lover’, I think it’s safe to assume that Wilder should’ve wisely abdicated auteur duties to someone else or chosen more amusing projects.

Another You (1991)- I recall seeing this final congress of Richard Pryor and Gene Wilder in the early 90’s on a cable station where its R-rating was heavily censored. Therefore, I thought watching the unabridged version might mitigate the film’s edited stench. Well, the blue language is reinstated but the desperation remains in this mistaken-identity dud. By sheer aptitude, Pryor’s silver-tongued timing occasionally shines through his onslaught of multiple sclerosis symptoms. Vulgarity is gutter poetry coming from him (I surrendered a laugh when he berated a Frankenstein impersonator as a “big, green fuck.”). On the other hand, it is also harrowing to look at him and see a withered, gaunt frame and pain emitting from his eyes.

Garnering the most chuckles is Kevin Pollak who absolutely nails Dudley Moore’s Arthur, Woody Allen and Peter Falk impressions. Pryor does seem supremely irascible around Wilder’s pathological-liar motormouth and it translates directly to the audience since his garrulous eagerness is tiresome. His outrageous stories about Buckingham and a terrorist plane takeover aren’t remotely uproarious. (I surrendered a laugh when he berated a Frankenstein impersonator as a “big, green fuck.”) Yet Mercedes Ruehl is a coquettish foil for Wilder. Weirdly enough despite appearing in three films prior to this, based on their nonexistent chemistry here, Wilder and Pryor seem more adversarial than friendly in this. This also marked Wilder’s last theatrical starring role. A bitter, sour end to his filmography.