Posted on September 7, 2016 by castordurden This article is the second part of castordurden’s tribute to Gene Wilder. Click here for part one!

The Frisco Kid (1979)- A pattern has started to emerge from this litany of under-the-radar Gene Wilder films. Almost consistently each one begins with a location and time stamp. In other words, most are period pieces which shows that Wilder was always looking to centuries past for inspiration. In this gingerly, but toothless Jewish western, it’s American during the Gold Rush and he is saddled alongside the lightsaber-gunslinging Harrison Ford whose second billing is quite hysterical in hindsight. Of the Polish rabbis, Wilder is the pratfalling Jerry Lewis of the group. Firstly, Wilder speaks like remarkably Jackie Mason and he is very amiable and congenial as the “schmendrick”. One of his most heartfelt performances in my opinion and it’s genuinely unsettling when his belongings and talis are plundered by three matchstick men. Instead of being hopelessly harebrained, Avram (Wilder) is just naive in his belief of mankind’s inherent goodness. Admirably Robert Aldrich doesn’t bludgeon us with addlepated disrespect for the Jewish religion.

Notwithstanding that plus, too many episodes revolve around Avram’s fish-out-of-water antics with the button being Semitic stereotypes like his incessant use of “oy” or his observance of the Shabbat. As his larcenous cross-country companion, Ford blazes some chummy chemistry with Wilder. It’s a minor, quaintly appetizing, but simplistically prolonged comedy that it is partially reliant on culture shock for its guffaws. The climactic shootout on the California shoreline is very striking and Wilder’s compunction over the violence is plaintive. 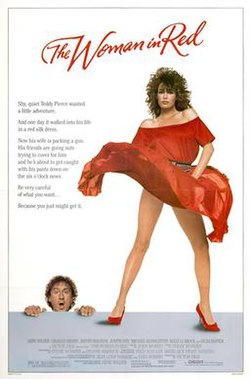 The Woman in Red (1984)- Probably Wilder’s most financially lucrative cruise behind the camera, The Woman in Red is an edgy, very funny riff on Marilyn Monroe’s The Seven-Year Itch (Kelly LeBrock even pays homage to the indelible skirt-lifting scene) with a Stevie Wonder soundtrack of pop singles. With a more adept hand at comical misunderstandings (ex. Wilder’s outburst over another employee’s perceived sexual innuendos is instantly gut-busting as is Gilda Radner’s riotously maladjusted role as the cuckolded Ms. Milner), Wilder finally attains reputable status as a director with a lightness of touch. As his curvaceous eye candy, LeBrock is definitely a buxom sexpot. In a stentorian piece of sideplot monkeyshines, Charles Grodin feigns being blind to outrageously side-splitting effect.

Wilder has never been this odiously conniving and his rabid behavior of juggling his married life with his extramural appetites is vintage Blake Edwards. The height of French-boudoir-farce merriment is a parking-brake accident when Teddy (Wilder) fabricates a heart attack in order to hide from Milner. Instead of seeing the calamity, Wilder chooses to affix the camera on Radner’s insolent expression with the Looney Tunes sound F/X of collisions in the background. Naturally, Wilder is somewhat craven with the coitus-interruptus ending where Teddy wavers at his hotel rendezvous. He does spare us a pat reconciliation between Teddy and his alienated wife. As male menopause goes though, The Woman in Red is an underrated entry on the topic and Wilder’s sole, effectively winsome directorial outing. 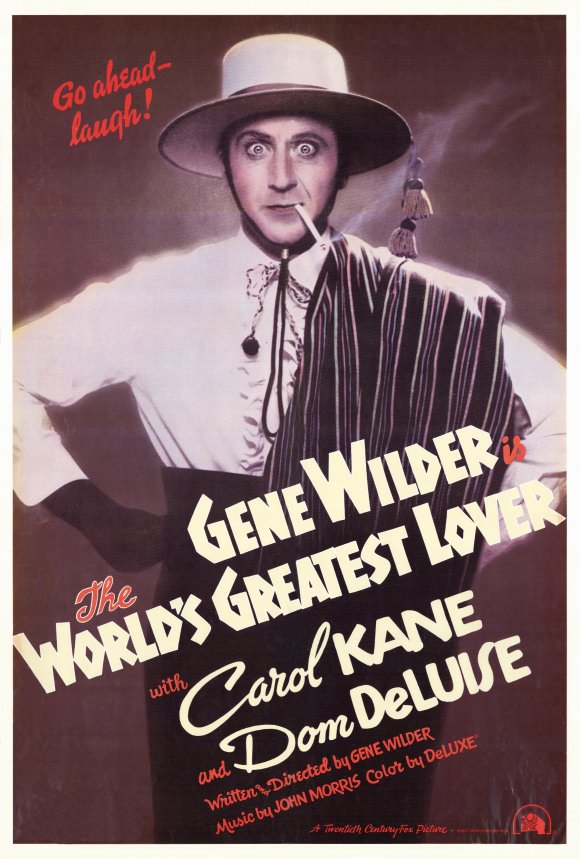 The World’s Greatest Lover (1977)- In a time capsule of the silent-film era, this second picture under Wilder’s directorial supervision is uncannily similar to Mel Brooks’ triumphantly genius satire Silent Movie from 1976. The first scene is fundamentally plagiarized from the megalomaniac Sid Caesar studio head in that aforementioned film. The cardinal differences are the audio track, Dom Deluise is an unfunny and hammy comedian and it is a mirthless carbon copy in this version. Overweening on the speed-ramping technique, the physical comedy of Rudy Hickman’s (Wilder) arm engulfed in a bakery assembly-line is vapid sans the requisite symmetry and clockwork timing. The screeching-cat effect without a subversion? Really?

In opposition to the leaden direction, Wilder sporadically registers a bull’s-eye such as Rudy’s nuzzling bluff of a male passenger on a train. His full commitment to daffiness is what favorably distinguishes it. Other than brief humdingers, most of the payoffs are telegraphed far in advance without a twist like when Rudy vociferates that he will be a star because he is “unique” to suddenly glimpse a platform of identical suits. Likewise, the Sex by Numbers booklet is a plodding sketch that dawdles on forever and the banter during it won’t be surpassing Abbott and Costello anytime soon. The plot about a ne’er-do-well’s misadventures to be the next Rudolph Valentino is just a clothesline for tin-ear ripostes (Annie (an auspiciously low-key Carol Kane) is mistaken for a prostitute). Worst of all, the final audition for the Rainbow Studios picture poses no stakes and by that juncture, we are praying for the curtain call. It’s an arbitrary, dunderheaded enterprise and it will hopefully be an evanescent footnote in Wilder’s romanticism of 1920’s Hollywood. Keep your hobbies to yourself.