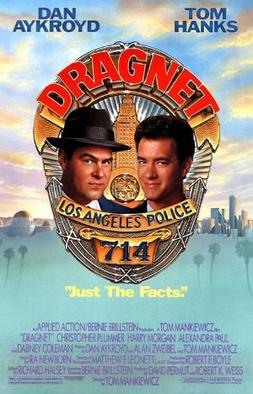 Before 21 and 22 Jump Street popularized the gimmick of updating dated, melodramatic television shows of yore into self-effacing, comedic ore, 1987 gave us a skewering of the 1950’s police procedural Dragnet. Since the template was relatively novel, I can imagine nostalgic Baby Boomers being apoplectic about their beloved crime drama being “bastardized” into a big-screen spoof.

However, unlike McHale’s Navy and CHIPs, director Tom Mankiewicz isn’t disdainful towards its forefather. In fact, the presence of Harry Morgan (from the original series) as Captain Bill Gannon is an implicit seal of approval for this affectionate, endearingly zany incarnation. He might be the most insolent with the as his eyes rolls whenever Akyroyd is sanctimonious about the detective’s debt to the citizens.

With the monotone, celeriac cadence of an auctioneer, Dan Aykroyd is the heir apparent to his uncle Joe Friday’s obedience to the enforcement in the Robbery Homicide division (“Even in the city of angels, some halos slip.”). He drives 8 miles slower on the highway in order to not splurge the taxpayer’s money. Aykroyd is never less than inspired casting in the role. Perhaps his Asperger’s Syndrome diagnosis aided in his retention of reciting county penal codes.

Ira Newborn’s remixed-rap title sequence almost fetishizes the fascist badge of the law as if this were Dredd A.D. The opening narrator lampoons the cliche that they’ve “changed the names to protect the innocence” by unintentionally revealing the actual names. As for Tom Hanks, while he is the more liberal and rubber-faced of the pair, he garners less laughs than Aykroyd’s deadpan shtick. Of course, this was before Hanks transitioned from the sardonic ne’er-do-well of raunchy comedies to bankable A-lister. 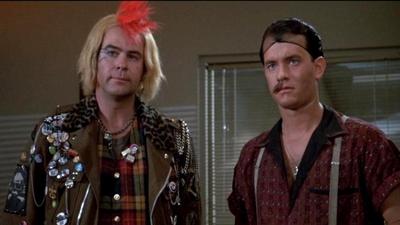 Upon revisiting Dragnet, it has aged remarkably well. In my youth, the movie seemed redundant on a one-joke premise (the manifold Village People disguises of the twosome) and Dabney Coleman’s lispy performance has only ameliorated from a mannered tic to a rib-tickling Looney Tunes cartoon. While Hanks is a glorified second banana (whose sole purpose is caustic asides and scribbling notes), Dragnet is not far afield from the tomfoolery of The Naked Gun.

Dragnet treads on a beam where it could topple into candy-coated irreverence during the P.A.G.A.N. (People Against Goodness and Normalcy) ceremony but this is actually the film’s kamikaze crown jewel. The clues of an anaconda-sized reptile, a missing wedding dress and a virgin all zigzag and converge into a screwball set piece with Hanks and Aykroyd jocosely wrangling the animatronic snake with hallucinogenic drugs.

Unfortunately this should’ve been the film’s climax as it regains an equivalent level of offbeat momentum afterwards. Despite that, Aykroyd singlehandedly gentrifies the movie above the inferior last act. Just the subtly square-jawed sight gag of Aykroyd’s mild consternation over flashing breasts is worthy of giving Dragnet another spin.