Posted on September 19, 2017 by curtisrunstedler 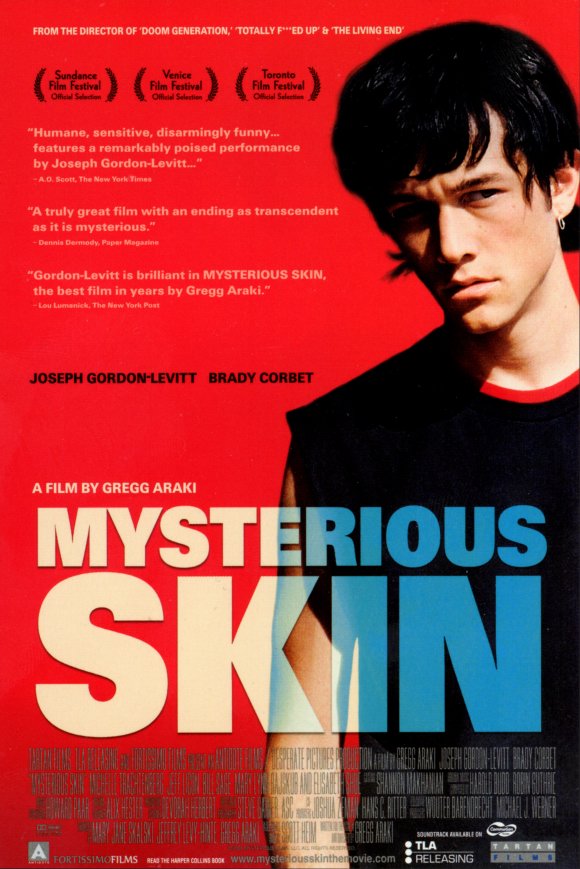 Based on Scott Heim’s acclaimed novel of the same name, Greg Arraki’s 2004 film Mysterious Skin is a tough and disturbing watch, but also an incredible cinematic experience. It tells of two boys Neil (a young Joseph Gordon-Levitt) and Brian (Brady Corbet) who are sexually abused by their baseball coach, and how these terrible actions affect them for the rest of their lives, alternating between their boyhood (1981) and their adulthood ten years later.

Thinking about depictions of ’80s parents again, both boys have really useless parents in the film. I mean, how can you be that ignorant and negligent with your child? The dad was probably sleeping on the couch that time. Neil’s mother (played by the always wonderful Elisabeth Shue) is well-meaning but very lonely absent and apparently more interested in dating men than raising her son. The boys and parents place their trust in the handsome coach and he violates that trust, luring in Neil and Brian under the pretence that their relationship is “love” and affection when it is increasingly predatory. And it is this dramatic irony that makes it so unsettling for us a viewer; watching him take advantage of Neil’s innocence (first by taking pictures, and then gradually more sexual and disturbing) and we know damn well what he’s really doing and there’s nothing we can do to stop it.

Of the two boys, Neil remembers everything; on the other hand, however, Brian suffers from a mysterious memory lapse and cannot forget what happened the night he was sexually assaulted, which is a plot point which leads to their reunion and a bittersweet conclusion many years later, when they are still haunted by the unspeakable crimes. Both boys diverge onto very different paths as they get older: Neil becomes a gay hustler who is attracted to middle-aged men, unsuccessfully seeking to fill the sexual void that the coach left behind and emotionally detached from his friends, family, and the world. He also exhibits signs of self-destructive behaviour; hating himself and hating his body, fucking every man if need be to fill the emptiness in his heart. Brian attributes his memory lapses to UFOs and alien abductions; in fact, he visualises the coach as an extraterrestrial, and becomes withdrawn and internalises his abuse. No one can make things right, but as the film shows, they can come to terms with it, and the act of talking about it and sharing memories and experiences provides a strange sort of consolation, even if the emptiness and hurt will always remain.

Both boys appear very confused about their sexuality as well. Neil seems to be aware that he is a homosexual, yet he refuses to get too close to anyone and he doesn’t appear happy or truly interested in any man either. His good friend Eric is much more clearly gay, but while he is interested in Neil, Neil doesn’t appear interested in him. I really enjoyed Michelle Trachtenberg’s role as Neil’s best friend Wendy and she provides a strange sort of maternal role for him that his own mother doesn’t really provide. It’s too bad he wasn’t bi in the movie because maybe it’s my inner romantic talking, but I thought they had great onscreen sexual chemistry too. Brian is more difficult to place; Eric suggests that he’s asexual, but Brian is so far removed from his feelings and reality that it is impossible to tell. He appears interested in a girl named Avalyn who also believes she was abducted by aliens and her behaviour possibly implies similar sexual abuse or trauma, but when she tries to come onto him, he is so distraught that any further sexual encounter seems unlikely. His scars run deep; perhaps he saw her as a kindred spirit that he could bond with through their pain and suffering as Neil turns out to be in a way, but he is so emotionally fucked by his horrific past that it is impossible to tell.

Given the content of the film, it must have been incredibly difficult to film. Arraki has said that the children were in no way involved with any of the sexual explicit scenes (thank goodness!); in fact, these scenes were shot separately without them knowing what was going on. Still, much of the horror of what happened comes from what is implied and what we don’t see; we are left to pick up the pieces after, and like a harrowing jigsaw puzzle, it all comes together in the end. The acting is great from everyone involved too; highlights for me were Gordon-Levitt, Trachtenberg, and Shue, as well as the guy who plays the coach. The coach was just so unassuming too, an unlikely outlet for the world’s worst crimes, and I was surprised how much they were able to show, particularly the sex scene between him and the kids and the scene where Neil gets raped in the bathtub by a lunatic client. It’s shocking content, much like The Woodsman (although it goes a few steps further in what we see), and many people will not be able to make it through, but it is a rewarding viewing, exposing the lasting damage done to victims of child sexual abuse and possibly one of the strongest indictments of child abuse that I’ve seen. The soundtrack is also quite strong in the film, with a heavy shoegazing/dream pop/ambient focus (Slowdive, Ride, Curve, plus a killer original score by Robin Guthrie and Harold Budd) and adds to that feeling of helplessness and lost innocence while simultaneously providing a blissful sound.

Mysterious Skin is bold filmmaking and very well done in terms of style and substance. It treats its subject matter with care and it’s very relevant and doesn’t shy away from confronting taboos and the consequences of these actions. I also enjoyed seeing more of Gordon-Levitt’s work, particularly since the only other young JGL movie I’ve seen is the awesome Angels in the Outfield. Not many people will watch this, but those who do will find it strangely touching, poignant, and unforgettable.