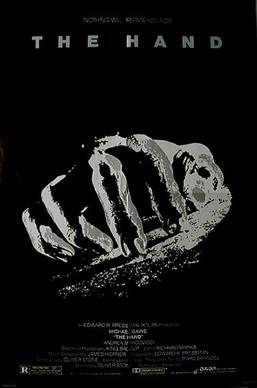 The radical rascal Oliver Stone’s second directorial foray is this monotonous, psychogalvanic thriller. Given his political leanings, one can be forgiven for assuming this is a biopic on the Mano Blanca death squad in Guatemala. Firstly, the inciting incident in which comic book artist Joe Lansdale’s (Michael Caine) extremity is decorked like a champagne bottle is alternately ghastly (the blood spray on the rear of the truck is too delayed though) and campy because of the cleanliness of the disembodiment and the tawdry prosthetic for his stump (in fairness, a twitchy lizard tail is more conspicuous because of its limited mobility).

According to legend, Stone and the studio fought over the execution of the hair-raising plotline. With the cursive-signature font, Stone purveys the film as a highbrow affair and the friction between Joe and his callisthenic wife at the beginning suggests that conjugal strain will be the locus. The “re-appreciation” discussion before the crash is purely hypnotic because of Caine’s thousand-yard stare at his wife’s request to relocate. As Joe is Sisyphean with his drawing, Stone’s commentary on artistic impotence born from emotional constipation is astute.

However, it is immediately sabotaged by an insipid screeching-cat gag. The film reeks of compromise in the editing bay. The black-and-white POV of the crawling hand might seem impressive if this were a Universal monster movie but it is a few decades shy of that target. Unfortunately, Caine is abetted by Stone to be self-indulgent in several scenes of Gene-Wilder-foppish-hair overacting when his page creation is seized by a new artist.

In the margins of a B-movie, Stone endeavored for a more disturbing take on the material but the deliciously envious performance of Caine can’t straddle the obtuse, strangulating attacks (one of which is director Stone as an embattled, boozing bum. Not since the heyday of Joe Eszterhas has a film been coated in such a dismissive manner towards the female characters who are either ice queens or coquettish co-eds with an unhealthy cynicism towards relationships and the yuletide season.

This entry was posted in Movies, Reviews and tagged halloween, horror movie, october, oliver stone, the hand. Bookmark the permalink.