Posted on September 24, 2018 by castordurden 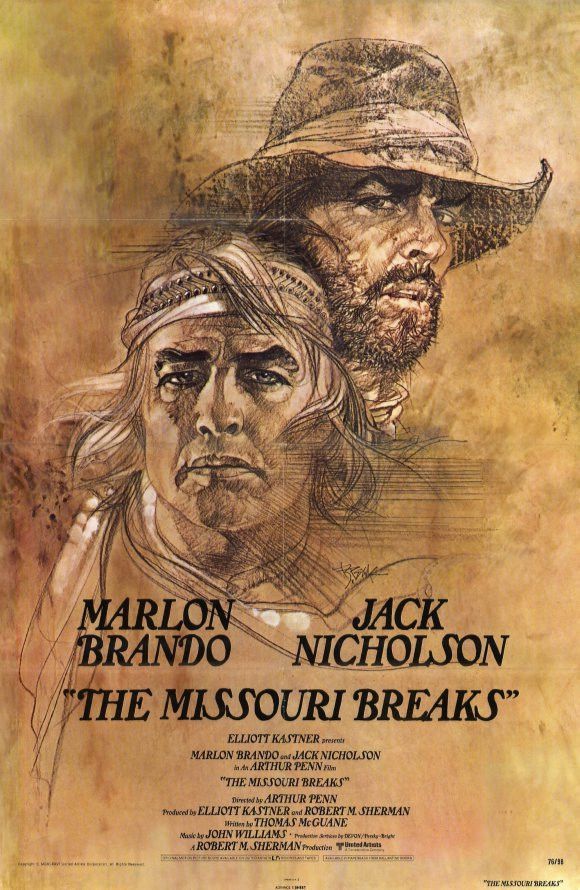 Recently, the acid westerns Slow West and The Sisters Brothers have honored and deconstructed the oater genre but they weren’t the first examples of mixing a postmodern sensibility with a frontier setting. The master behind the epic yarn Little Big Man, Arthur Penn returned to the sublime well with the ceaselessly daft, high-wattage The Missouri Breaks which marked the only collaboration between Hollywood heavyweights Marlon Brando and Jack Nicholson.

In what could’ve been a quintessential cat-and-mouse film under an inferior director’s guidance, Penn opts for a more unconventionally irreverent tone. As the horse thief Tom Logan, Nicholson is the antithesis of machismo. He is vulnerably bashful around Badlands rancher David Braxton’s wife (ex. He is reticent about disrobing her blouse before coitus). He is aghast around the garroting noose that has befallen many of his accomplices. In fact, he never carries a gun.

When he is introduced, Brando is fetishistic about grooming his horse and it is already crystalline that he is playing to the rafters with his quixotic take on the Irish regulator Robert E. Lee Clayton. Then he blusters into a funeral parlor and manhandles a corpse. After this bout of unorthodox behavior, the company inside exhales a chuckle and correctly asks “Where did he come from?” which was probably a reflexive representation of the audience’s response to the character.

Contrary to popular belief though, I believe Brando was immersive in the flowery prose and Clayton is the playfully intimidating foil of Nicholson. I could envision on-set clashes between the two veteran actors. Logan is Nicholson at his smirky best and Clayton is deliberately tweaking his quaint-settlement outlook with oblique threats.

The botched train robbery is an indication of what Penn’s seriocomic gumption is. Logan is politely liberating the money from the coffers when he is befuddled and drops the satchels of money over the bridge and nearly somersaults to his death. In most productions, Logan would’ve been an insolent antihero instead of the buffoon he is. Then again, Penn isn’t transcribing cliches with a playbook. He has crafted a mordantly facetious ode to rustlers of yesteryear.