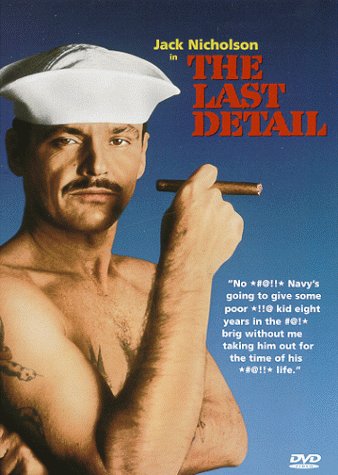 As laughable as this may seem today, there was once a time when films could generate great controversy and not garner the respect they deserved because they contained profanity. Such was the case with a 1973 movie called The Last Detail, which ran into numerous problems getting made and released because it contained a lot of salty language. Keep in mind, however, that the MPAA had only around for a couple of years and audiences were still getting used to hearing language in films that was stronger than “Frankly, my dear, I don’t give a damn”. Of course, watching The Last Detail today, the profanity isn’t shocking at all and hardly even noticable, especially after we’ve been treated to the likes of Scarface and Goodfellas. The main argument from screenwriter Robert Towne was that the phrase “cuss like a sailor” existed for a reason, so it was only appropriate that a film about sailors contain a lot of cussing. Anyway, when The Last Detail was finally released, it received a lot of critical acclaim and some Academy Award nominations, but because of the controversy surrounding the film, it was not a huge commercial success and still remains highly underrated today.

Directed by Hal Ashby, The Last Detail is adapted from a novel by Daryl Ponicsan, and is a very unique road movie, a comedy-drama that could almost be considered a more gritty, realistic version of the famous Gene Kelly-Frank Sinatra musical, On The Town. The story involves two veteran Navy sailors named “Badass” Buddusky (Jack Nicholson) and “Mule” Mulhall (Otis Young) who are assigned the shore patrol detail of escorting an 18-year old sailor named Meadows (Randy Quaid) from their station in Norfolk, Virginia to Portsmouth Naval Prison in New Hampshire. Meadows is a kleptomaniac who is being given an eight-year sentence in the brig and a dishonorable discharge for attempting to steal $40, but it’s pretty obvious that the punishment does not fit the crime. Meadows just made the unlucky mistake of trying to steal from the base commander’s wife’s charity box, so an example is going to be made out of him. Buddusky and Mulhall have a whole week to deliver their prisoner, so their intention is to drop Meadows off as soon as possible and spend the rest of their assignment having a good time. However, during the trip, Buddusky and Mulhall start to feel great pity for Meadows, who seems like such a naive innocent with really low self-esteem, and is going to spend the next eight years in prison without ever really having experienced the joys of youth. The two sailors then decide to take several detours into places like Washington D.C., New York City and Boston in order to show Meadows a good time during his last few days of freedom. In this classic scene, they try to take the undertage Meadows into a bar to get him drunk, which leads to a heated exchange between Buddusky and the racist bartender.

Buddusky and Mulhall take Meadows on many wacky adventures that include getting drunk, getting into a fight with some Marines in a train station bathroom, and Meadows finally losing his virginity at a brothel. Indeed, Meadows does wind up having the best time of his life and gaining a lot of self-confidence, but the knowledge that his awakening is going to be followed by eight years in the brig lends a tinge of sadness to the proceedings. Of course, literally hundreds of these type of coming-of-age road trip movies have been made over the years, but very few of them have ever been as well-acted or as well-written as The Last Detail. Like I said earlier, screenwriter Robert Towne encountered a lot of controversy when he chose to pepper his script with profanity, but much of the movie’s dialogue is delightfully colourful (“You’re shittin’ me!” “I would never shit you! You’re my favourite turd”!). Towne is lifelong friends with Jack Nicholson and would often tailor some of his roles to perfectly suit the actor, and indeed, the two of them wound up striking gold together with their subsequent film, Chinatown. While Nicholson did garner an Oscar nomination for his performance in The Last Detail, the performance is nowhere near as well-remembered as his iconic roles in such 1970s classics as Five Easy Pieces, Chinatown and One Flew Over the Cuckoo’s Nest. The Last Detail definitely features some of Nicholson’s most underrated work. Of course, since Buddusky is a very wild, troublemaking character, you get to see flashes of the crazy, manic Jack Nicholson that we all know and love. However, Nicholson also does a great job of showcasing the character’s softer sentimental side, as you know Buddusky feels really conflicted about having to take Meadows to prison and genuinely wants to help the kid out. The movie keeps dropping hints that Buddusky and Mulhall might give in and let Meadows go, but Meadows starts to consider the two sailors his best friends and seems conflicted about the idea of getting them in serious trouble if he escaped.

The role of Meadows was one of the earliest of Randy Quaid’s career and garnered him his only career Academy Award nomination (incidentally, the runner-up for the role was an unknown actor named John Travolta, who would have to go back to toiling in Safeguard Soap commercials for awhile). This is definitely not the typically goofy Randy Quaid performance that everyone would grow accustomed to, as he succeeds at turning Meadows into an endearing character that you feel great pity for, but still cannot help liking. Otis Young is a fairly unknown actor who would retire from the business only a few years later, but he still does do a very good job in the role of Mulhall and provides the level-headed voice of reason in the film. While The Last Detail is pretty much a three-character story, it’s also fun spotting some recognizable actresses pop up in some early of their earliest small roles, including Gilda Radner, Nancy Allen and Carol Kane as the prostitute who takes Meadows’ virginity. If this film was made today, it would likely cop out with the happiest possible ending, but 1970s cinema usually wasn’t too concerned about happy endings and The Last Detail remembers that some conclusions in life are simply inevitable, no matter how unfair they may seem. While the film didn’t go home with any Oscars, it did earn Jack Nicholson the “Best Actor” award at the Cannes Film Festival. However, history has shown that even when a film garners awards and critical acclaim, it doesn’t always remain as well-remembered as it deserves to be. That may simply be because the 1970s are just loaded with cinematic classics, but The Last Detail still remains one of the more underrated ones.