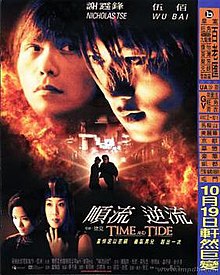 In the 1990s, it seemed that any big-name Hong Kong action director who wanted to make the transition to Hollywood fell victim to the “Jean-Claude Van Damme Curse” as it seemed like they were contractually obligated to make their North American burst with “The “Muscles from Brussels”. John Woo burst onto the Hollywood scene with the Jean-Claude Van Damme film, Hard Target, which didn’t measure up to Woo’s Hong Kong efforts, but was definitely way above average for a JCVD vehicle. Ringo Lam’s North American debut would also be a Jean-Claude Vam Damme film, Maximum Risk, and while Woo would move onto bigger things in Hollywood, Lam was doomed to a purgatory of JCVD straight-to-video efforts for the rest of his tenure. However, no Hong Kong director was stuck with a sillier debut effort than Tsui Hark. After building a big name for himself with such efforts as Peking Opera Blues and the Once Upon a Time in China series, Tsui’s first Hollywood film wound up bring Double Team, which was not only a JCVD vehicle, but an ill-fated attempt to turn Dennis Rodman into a movie star! The film was too ridiculous for words and featured a climax so absurd that it has given birth to a new Internet phrase called “Frying the Coke”. Tsui would work with Van Damme again for his next Hollywood film, Knock Off, which somehow thought that teaming JCVD up with Rob Schneider would make for compelling cinema. Knock Off turned out so awful that Tsui finally retreated back to his native Hong Kong. It was obvious he wanted to regain the credibility he’d lost during his Hollywood stint and that he wanted to do it with a bang. The end result was an eye-popping effort called Time and Tide.

Now, I’m not going to pretend that Time and Tide isn’t any less absurd than Tsui’s Hollywood efforts. The plot is such a convoluted mess that I had to consult Wikipedia to properly summarize it for you. The film opens with a young man named Tyler (Nicholas Tse) impregnating a lesbian cop after a drunken one-night stand. Even though their chances of a relationship are non-existent, Tyler still wants to support his child financially, so he takes a job working for an unlicensed bodyguard service run by his Uncle Ji (Anthony Wong). Nine months later, while helping to foil an assassination attempt, Tyler winds up crossing paths with a mercenary named Jack (Wu Bai) whose wife, Ah Hui (Candy Lo), also happens to be nine months pregnant. Through circumstances way too complicated to explain, a group of South American and Chinese mercenaries try to recruit Jack into an assassination plot. When Jack double-crosses them, the mercenaries come after him and Tyler somehow gets caught in the middle. The last half of the film involves Jack and Tyler teaming up to fight off the mercenaries in a series of spectacular shootouts and the two of them must deal with this while both their babies are being born. The climax involves Tyler delivering Ah Hui’s baby while she is simultaneously firing off a gun at the bad guys! Trying to follow this plot and figure out who’s who and what their loyalties are is an exercise in futility. However, most of the action sequences presented here are SO good that it’s easy to forgive all the flaws in the plot and recommend the film.

The original cut of Time and Tide was over three hours long, but Tsui thought it was too slow-paced and decided to cut it down to 113 minutes. To say that this movie shows signs of post-production cutting is a massive understatement. I’m willing to believe that the convoluted plot is much easier to follow in the original three-hour cut and that the motivations of the characters make a lot more sense. It seems like many of the relationship-building scenes between Tyler and Jack must have hit the cutting room floor since they seem to bond together as partners with very little explanation. And in spite of the presence of Hong Kong acting legend Anthony Wong in the role, the character of Uncle Ji is very underdeveloped and pretty much just disappears halfway through the movie. Time and Tide is a prime example of a film where plot and character have been greatly sacrificed for action. This is an approach that could be fatal for many action films since action scenes can become pretty boring when you don’t care about the characters or even have much much idea who they are. However, the action scenes in Time and Tide are so consistently stylish and inventive that it hardly matters if you don’t understand what’s going on. One sequence that has to be seen to be believed and is probably worth the price of admission on its town is an extended cat-and-mouse shootout at a pair of apartment tenements. Some of the stunts in this sequence are so spectacular that you will be wondering how the hell they filmed them, particularly the one unbroken tracking shot where the camera actually follows one of the characters out the window while he’s propelling straight down the side of the building! It’s also worth noting that this sequence features a character surviving a massive explosion by hiding in a refrigerator. It’s pretty ironic that the same director behind the “Frying the Coke” scene would pre-date the “Nuke the Fridge” scene in Indiana Jones and the Kingdom of the Crystal Skull by eight years!

The last hour of Time and Tide is pretty much wall-to-wall action, as it transitions from the apartment tenement shootout to an extended gun battle at a train station to a violent climax inside a stadium during a concert. Like I stated earlier, it’s very difficult to maintain lengthy passages of non-stop action in a film without them becoming repetitive and monotonous. John Woo pretty much set the bar at pulling this off with his 30-minute climactic hospital shootout in Hard-Boiled and Tsui Hark does the same thing throughout Time and Tide. Any complaints about the confusing plot or awkward pacing during the movie’s first half are easily forgiven once you sit through the non-stop roller coaster ride of the second half. Tsui rarely ever repeats himself during this non-stop barrage of action and delivers plenty of unique and inventive sights that you’ve never seen before. By the end, after Ah Hui fires off a gun while giving birth and a vicious bad guy decides to throw the newborn baby around to lure the hero out of hiding, you’ve long since suspended your disbelief and are just enjoying the hell out of this absurd ride. Time and Tide has built up a solid cult following amongst action fans, but it was not a blockbuster hit in Hong Kong and remains fairly underrated. Far too many filmmakers that hold the mistaken belief that a strong plot or characters won’t matter just as long as their film delivers a lot of action. However, that’s a very wrong-headed assumption to make because an action director has to be VERY skilled and talented at what he does if the viewer is willing to lose themselves and ignore the film’s shortcomings. Tsui Hark definitely falls into that category and Time and Tide paints a picture of a director who was frustrated by the crappy projects he was given in Hollywood, but is now relishing the opportunity to cut loose and do whatever he wants. It’s clear that the director was having a ball while making this film, and that feeling of delight rubs off on the viewer.