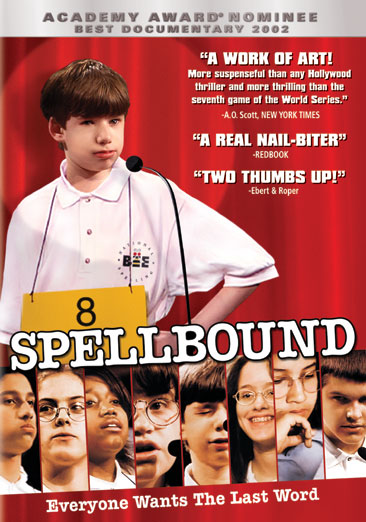 Our on our last Shouts From the Back Row podcast, we discussed our favourite G-rated movies and one of my picks always manages to shock people when I tell them how much I like it. Very few films have ever been a tougher sell for me than Jeffrey Blitz’s 2002 documentary, Spellbound, and this is definitely one of the most unlikely selections to be featured in “Robin’s Underrated Gems”. Most people would roll their eyes and wonder why the hell anyone would want to watch a documentary about spelling bees, but I always counter with the statement that Spellbound does a better job at generating tension and suspense than most fiction films ever could. If you’re an intelligent, competitive kid who desperately wants to succeed, there are few situations that could be more nerve-wracking than stepping in front of a microphone and trying to spell a word in front of a large audience of people. Of course, Spellbound is a film that greatly appeals to one’s inner geek, so your enjoyment may depend a lot on how much you identify with its subjects. Myself, I was a complete spelling nerd when I was in elementary school and was so far advanced in the field that I was often exempt from having to take the class spelling tests. Competing in a spelling bee would probably have been a great outlet for me at that age, but unfortunately, they did not have any in the area where I grew up. However, if you think you’re an expert speller, Spellbound will really open your eyes to how much studying and preparation is required in order to win a spelling bee, and how all that hard work can instantly be erased with one little mistake.

Spellbound follows the separate journeys of numerous kids to make it to the 1999 Scripps National Spelling Bee in Washington, D.C..The event has been a yearly tradition since 1925 and 249 winners of regional spelling bees will compete for the chance to win $10,000 and national fame. This spelling bee has become so renowned that the final rounds are even broadcast on ESPN! The film focuses on eight junior high school kids in particular, who each come from different backgrounds and have their own unique personality. What binds them together is they are all extremely intelligent and most of them work EXTREMELY hard to develop their impeccable spelling skills. These kids include:

-Angela Arenivar, a Mexican-American from Texas who is fluent in both English and Spanish. Her parents entered the country illegally in order to provide her with a better life and her father still speaks no English

-Nupur Lala, a driven, hard-working Indian-American girl. In one of the movie’s funniest punchline, the Hooters in her hometown congratulates her for winning a spelling bee with a sign that reads “congradulations”

-Emily Stagg, a bubbly, energetic girl who finished 10th in the previous year’s competition and wants to top that performance

-Ted Brigham, a very quiet introvert who has trouble fitting in at school. Sadly, he would pass away in 2007 at the age of 22, but his official cause of death has never been released

-Ashley White, a black girl raised in the projects by a single mother with hopes for a better life. Ashley wound up having a child herself not long after Spellbound came out, but her exposure in the film helped rally enough support to eventually get her through college

-Neil Kadakia, an Indian-American workaholic with a goal-driven father who grills his spelling abilities like crazy and seems to take the competition VERY seriously!

-April DeGideo, a pessimist with eccentric parents who is obsessed with spelling, but has no idea how smart she really is

-Harry Altman, who is undoubtedly the most memorable individual featured in the film. He is extremely talkative and hyperactive and would probably drive you insane if you had to spend much time around him. In this interview clip, he demonstrates his eccentricities by talking like a robot!

In a neat twist of irony, the final word of the Scripps Spelling Bee is “logorrhea”, which is described as “an excessive and uncontrollable talkativeness” and could be used to describe Harry Altman perfectly! Anyway, the movie’s first third does a nice job at introducing these eight individuals, but it’s after arriving in Washington for the National Spelling Bee that Spellbound really begins to take off. Early on, you get a sense of how intense these competitions can be when they show Angela going through a non-stop series of “sudden death” spelling with her opponent at her regional spelling bee before finally winning in the 54th round! When it reaches the National Spelling Bee, Spellbound does a marvelous job at editing together the two days and several rounds’ worth of competition and it effectively conveys what a nerve-wracking experience the whole thing can be. Cynics may scoff at the notion that a spelling bee can make for riveting and suspenseful viewing, but there is a reason why it’s broadcast on ESPN every year. The extreme tension is generated by the fact that there are no second chances or room for mistakes in this competition. The first time you misspell a word, you are eliminated. The contestants often state that a lot of luck may be required if they hope to win and that couldn’t be more true. Your success may depend a lot on the luck of the draw and which word you’re asked to spell. Sometimes, a contestant may be asked to spell something relatively simple like “odyssey” or “mercenary” while the person after them is stuck with some ghastly word that most people have never heard of like “chateaubriand” or “seguidillia”.

And, of course, just because you’ve studied and memorized hundreds of words doesn’t mean that you will spell it correctly when you’re on the spot in front of an audience. In one scene, one of the kids becomes emotionally distraught after being eliminated and you sense that she probably knew how to spell the word, but wound up making a mistake in the heat of the moment. It’s truly heartbreaking to think hours upon hours spent studying thousands upon thousands of words can all be negated just because you get one letter wrong. As a spelling aficionado, I personally found watching Spellbound to be doubly exciting as it gave me a chance to test out my own spelling skills, and part of the fun was finding out if I could actually spell the words these kids were presented with. As it turns out, most of the words were insanely difficult and I know that when I was their age, I wouldn’t have been anywhere near ready to compete in a national spelling bee – but then, I’m not sure I would have wanted to! While it is a great achievement to win the Scripps National Spelling Bee, many of these kids do seem level-headed enough to realize that this is not the be-all and end-all of their existence and some of them seem pretty relieved that they can finally stop memorizing words and move on to more important things in their life. Spellbound does a very effective job at presenting what it’s like to be an intelligent overachieving kid who may not entirely fit in at school, but take great pride in the things that they excel at. But most of all, this documentary pulls off the seemingly miraculous task of generating tension and excitement from a subject that most viewers would assume is boring and after viewing Spellbound, you’re convinced that spelling bees can be among the most nerve-wracking experiences imaginable. Some may remain skeptical, but I still maintain Spellbound is very compelling cinema… and since it’s also G-rated, it should also be considered essential viewing for younger audiences, who may greatly relate to the message it sends out.