Posted on October 10, 2011 by curtisrunstedler 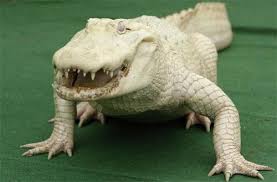 After watching Werner Herzog’s recent documentary Cave of Forgotten Dreams, many viewers were puzzled by his presentation of the albino crocodiles in the postscript. I would like to offer my interpretation of the albino crocodiles sequence to explain any misunderstandings or misinterpretations. Unfortunately, I couldn’t find any footage online of the albino crocodiles sequence in the coda of the film, but it’s better to watch in the context of the film’s entirety anyway. A crocodile is prehistoric, and with modern crocodiles you have the two epochs merging together. It becomes timeless like the Chauvet caves. Their albinism displays a certain sensitivity. Albinos are sensitive to light and temperature. The cave paintings are sensitive to temperature as well. Basically, Herzog is looked at the concept of doppelgangers. The word “doppelganger” is German for double walker. It’s like a spiritual double of a person. The albino crocodiles are like doppelgangers because they all look identical to one another. It’s like looking into their own souls or at their own reflections when they are put together. Herzog feels this reflection when he is in the caves. He feels thousands of ancient eyes upon him, but as an artist he sees himself in the spirituality and art of the caves. There is a certain oneness in the essence of humanity, and that certain oneness unifies us and makes us dependent on one another. Walking in those caves, time becomes meaningless. It’s like a time capsule going back a thousand years, and he sees himself in the bones around the artwork. They are the artists and archaeologists of prehistory, and they meet together in the twenty-first century, gazing into each others’ souls through the artwork that remains. Hopefully that interpretation clears up any uncertainties with his strange yet remarkable conclusion to the film. It’s a brilliant allegory to end a well done film. My favourite Herzog allegory will always be the dancing chicken, which is featured at the end of Strosczek. I’ve included it below for your personal enjoyment. If you want to argue, contest or talk about more details in the film, contact me at [email protected]. I’d appreciate your feedback.

This entry was posted in Movies, Runstedler's DVD Pick of the Month. Bookmark the permalink.