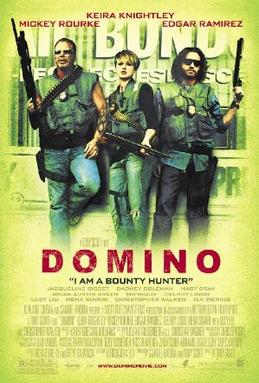 In light of the recent release of Prometheus, this week’s Shouts From the Back Row podcast focused on the career of Ridley Scott, so it’s only appropriate that I pay some lip service to his younger brother, Tony. We debated on our podcast about whether or not Ridley Scott could be considered an auteur, but that debate is probably not necessary for Tony. Unlike his brother, no one would ever consider Tony Scott a great artist and he’s unlikely to win any Academy Awards. Overall, however, his career has been just as successful and prolific as his brother’s. He has made some great pieces of entertainment, with my personal favourites being The Last Boy Scout, True Romance and Crimson Tide. Like any major director, Tony Scott has his fair share of stinkers and flops, and one of his biggest failures was his offbeat action thriller/dark comedy, Domino. The film did very poorly at the box office and only garnered an approval score of 19 % at Rotten Tomatoes. But God help me, I really liked it and thought it was unfairly maligned and underrated. Domino is quite a mess, to be sure, and not everything in it works, but it’s the ultimate example of a “kitchen sink” movie which features enough cool ideas for a dozen movies. The story was based on the life of Domino Harvey, the daughter of actor Laurence Harvey (best known for his role as Raymond Shaw in The Manchurian Candidate) who, in spite of her privileged background, made the surprising decision to become a bounty hunter. Scott had been interested in doing a movie about her story since the mid-nineties and decided to purchase the rights to it, but it was not until Donnie Darko director Richard Kelly was brought in to work on the script that the project was finally greenlit. Put together Tony Scott’s frenetic visual style and Richard Kelly’s twisted mind and the end result is a truly one-of-a-kind film.

Believe it or not, compared to his directorial works, Domino is relatively sane and normal by Richard Kelly standards. However, his script is one of the most convoluted stories to ever be made into a feature film and it’s pretty amazing that they were able to fit all this material into two hours. The basic storyline involves Domino Harvey (Keira Knightley) being dissatisfied with her wealthy, privileged lifestyle and deciding to pursue a career in bounty hunting, a field that is generally not populated by young women. She hooks up with a grizzled veteran named Ed (Mickey Rourke) and his hot-tempered Venezuelan sidekick Choco (Edgar Ramirez). They also work alongside an Afghan named Alf (Riz Abbasi) who loves to blow shit up at every opportunity. Domino takes to her new profession surprisingly well and in her first assignment, she ends an intense Mexican standoff with a bunch of gang bangers by performing a lap dance for them.

Domino’s story is told in flashbacks while she is being interrogated by an FBI agent (Lucy Liu). Trying to summarize this entire plot could turn this into the War and Peace version of “Robin’s Underrated Gems”, but here are the major bullet points:

-Domino, Ed and Choco work under a bail bondsman called Claremont Williams III (Delroy Lindo) who also runs an armoured car business and plans a heist of $10 million heist from one of his clients, Drake Bishop (Dabney Coleman), the billionaire owner of the Stratosphere Hotel and Casino in Las Vegas. The $10 million happens to belong to the mafia, whom Bishop has been laundering money for

-Claremont has several mistresses, including Lateesha (Mo’Nique) and Lashandra (Macy Gray). Lateesha works at the DMV and runs a counterfeit driver’s license racket. The heist is motivated by Lateesha’s granddaughter who has a rare blood disorder and needs an expensive operation. Lateesha uses her fame as the world’s youngest grandmother to make an appearance on The Jerry Springer Show!

-Domino’s crew are offered the chance to star in their own bounty hunting reality series by a TV producer named Mark Heiss (Christopher Walken), who is described as having “the attention span of a ferret on crystal meth” (talk about a perfect analogy for this movie!). Beverly Hills 90210 actors Brian Austin Green and Ian Ziering are brought in to host the show and are dragged on Domino’s wild adventures, their primary purpose being to serve as the “celebrity hostages”

Of course, the planned heist goes horribly wrong, all hell breaks loose, and it all concludes with an epic shootout in the Stratosphere. But not before the heroes wind up stranded in the desert and are saved by a preacher played by Tom friggin’ Waits!

Domino begins with a pretty apt title card: “This is based on a true story. Sort of”. Basically, Domino Harvey is real, some of the other characters are based on real-life people, but that’s about the only part of this story which is based in reality. I wasn’t kidding when I referred to Domino as a “kitchen sink” movie. This movie literally has EVERYTHING in it! I’m a lot more supportive of movies that are not afraid to try new things rather than those that follow a lazy formula, and Domino certainly fits into the former category. This is one hell of a frenetic and chaotic movie as Tony Scott employs quick cutting, handheld shots and every visual trick imaginable, alongside a soundtrack which seems to employ every song in existence throughout the course of the movie. Since he never lets up and never gives the audience a chance to breathe, some viewers may find Domino exhausting. Truth to be told, I might have preferred to see this story told in a more straightforward, less ADD-esque fashion, but the chaotic tone just seems to fit the material. I appreciate movies that constantly surprise you and leave you unable to predict what is going to happen next and Domino certainly does all those things. As convoluted as Richard Kelly’s script may be, it at least makes sense and is easy to follow, unlike some of his directorial efforts. While scenes like the Jerry Springer segment may be completely unnecessary and have nothing to do with the main plot, they’re damn sure hilarious.

The casting of Keira Knightley in the role of Domino raised a lot of eyebrows at the time since she seemed like one of the least likely actresses to play a role like this. However, Knightley fits the role surprisingly well and is able to effectively convey the character’s toughness through her skinny 20-year old exterior. Though The Wrestler was hailed as Mickey Rourke’s comeback performance, people tend to forget that he did have some good roles in the years prior, most especially in Sin City. The character of Ed is just tailor-made for Rourke, and he delivers my favourite line in the movie after Choco destroys a TV set while he’s watching a porno (“Jesus Christ, Choco, I just got done paying $12.95 for this movie. I’m never gonna know how it ends”). Domino sports one of the wackiest casts ever assembled for a motion picture and you can’t accuse Scott of not utilizing them all to their fullest. At the end of the movie, the real Domino Harvey makes a brief appearance onscreen, but sadly, she died of a fentanyl overdose on June 27, 2005 and never got to live to see the release of the film. Unfortunately, however, it was a release which was met with little fanfare from audiences and critics, and Domino remains what is probably the least successful film of Tony Scott’s career. The film is undeniably self-indulgent and excessive and is not beloved by everyone, but I consider it a guilty pleasure. It’s another movie that I consider to be an example of “passing the cactus”, where I’m able to ignore all its faults and enjoy it anyway. Domino is an acquired taste to be sure, but I’ve always admired its offbeat wackiness and even though this column is probably going to raise more eyebrows than most of the other ones I’ve written, I still think it’s an underrated gem.