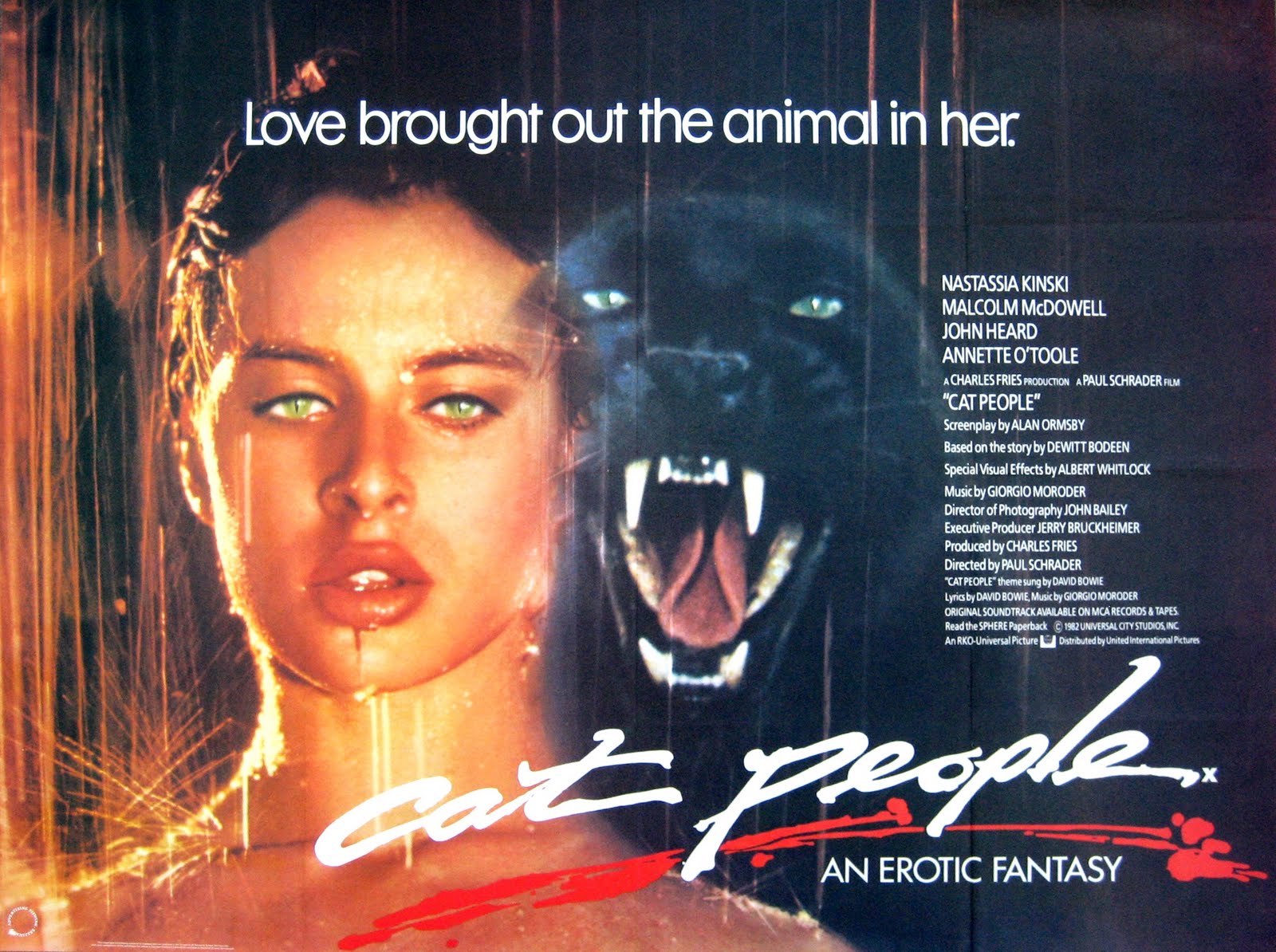 In 1982, Universal Pictures released remakes of two classic horror films which drew mostly mixed reviews from the critics. In both cases, the detractors would mention how the original films were so much better because they relied on the “terror of the unseen” and generated their suspense by keeping most of their horrific moments off-screen. These critics decried the remakes for being more open and explicit about their horror and not leaving anything to the viewer’s imagination. One of these remakes was John Carpenter’s The Thing, and thirty years later, not only do most people now believe that it’s a superior film to the original, but it’s also considered to be the one of the greatest remakes ever made. The other remake was Paul Schrader’s Cat People, and thirty years later… well, opinions on it are still sharply divided. The original 1942 version of Cat People was directed by Val Lewton, who made up for his film’s lack of budget by utilizing the “terror of the unseen” idea to its fullest. It’s considered a landmark horror classic because it leaves so much to the viewer’s imagination and generates tension through subtlety and ambiguity. However, there is nothing subtle at all about the Cat People remake. The film was directed by Paul Schrader, who made his name by writing the original screenplay for Taxi Driver before going on to direct such films as Blue Collar, Hardcore and American Gigolo. Schrader is not a director known for making horror films and many years after this, would even be replaced as director on Dominon: A Prequel to the Exorcist because the finished product was not the traditional horror flick the studio was expecting. Well, let’s just say that Cat People also comes across as a film which was made by someone who normally doesn’t direct horror films. Overall, the remake seems to work better as a bizarre piece of erotica than as a horror film and while it certainly has its flaws… God help me, I actually prefer it to the original.

Cat People takes place in New Orleans, and opens with a beautiful young woman named Irena Gallier (Natassja Kinski) arriving in the city. She shacks up with her brother, Paul (Malcolm McDowell), whom she has never met since their parents died when they were kids and they were separated. Paul seems a bit too lustful and touchy-feely around his sister, but it turns out there’s a major reason for that: they are both cat people. If they have sex with another person, they are transformed into a leopard, and the only way they can become human again is by killing someone. If cat people want to have an active sex life without the side effect of turning into a feline, they can only have sex with their own kind, which means that Irena and Paul have descended from several generations of inbreeding. Irena doesn’t easily warm up to the whole “incest is best” concept, so Paul usually satisfies his sexual appetite by visiting prostitutes and killing after his transformation. After an incident at a brothel that turns him into a leopard, Paul is captured and caged at the local zoo. Irena eventually visits the zoo and winds up becoming involved with the zookeeper, Oliver Yates (John Heard). (It’s worth noting that the character was named “Oliver Reed” in the original film, but changed to “Yates” here in order to avoid association with the legendary British actor.) Paul is forced to kill someone in order to turn human again and escape the zoo, leading to the start of a very bizarre love triangle. Irena is still a virgin, so her newfound love for Oliver creates a major dilemma: if she has sex with him, she will turn into a leopard and probably kill him. I mean, how would you like to wake up in the middle of the night after sex with a gorgeous young girl and find this in your bed?!

Gill has already discussed the original 1942 version of Cat People in his column, “10 Horror Movies That I Love, But You Probably Haven’t Seen”. It is indeed one of those old-school horror films that never spells out its answers and leaves certain things ambiguous. Throughout most of the original film, you’re left wondering if Irena really is a cat person or just a psychologically disturbed woman who’s cooked up this fantasy scenario in her mind. The remake establishes that it does not care too much about ambiguity by having Paul transform into a panther within the first fifteen minutes. Narrative-wise, this film is uneven and a bit of a mess. The original screenplay was written by Alan Ormsby (who wrote another person favourite of mine, Deranged) and it was apparently a much more straightforward retelling of the Cat People story until it was rewritten by Paul Schrader to suit his own unique vision. In fact, Schrader has said he almost wishes he’d made a standalone horror movie rather than a Cat People remake since much of the negative reaction to the film is due to unfavourable comparisons with the original. In fact, whenever the remake attempts to pay tribute to the original film, it often leads to plot holes, such as when Schrader does his own recreation of the original’s most famous scene, where Irena stalks her romantic rival through a park and into a swimming pool. As a standalone sequence, Schrader’s version is pretty well done, but within the context of the film’s narrative, it really doesn’t make a whole lot of sense. Narrative flaws aside, however, the Cat People remake is still a strangely hypnotic and spellbinding film. Once the film opened to the tune of David Bowie music with a surreal, beautifully shot sequence in the world of the cat people, I was hooked.

As sacrilegious as this opinion may be to horror buffs, the Cat People remake is just such a one-of-a-kind piece of cinema that for reasons I can’t entirely explain, I like it better than the original. If anything, it deserves a lot of praise for trying to something very different. The original Cat People was seen as a metaphor for repressed sexuality, and it’s obvious that Schrader wanted to explore that angle even further instead of making a traditional horror film. This version of the story is an artful erotic fantasy that just happens to have some horror elements surrounding it. Natassja Kinski is perfectly cast as Irena and while her ample nude scenes are what people remember about her role in the film, she does a very good job at underplaying what could have been an incredibly silly role. In fact, the entire cast and the filmmakers deserve a lot of credit for taking what is essentially ridiculous material and playing it completely straight, but they do it with such sincerity that the movie works. The film is gorgeously shot and skilfully assembled, and the score from Giorgio Moroder is terrific. The David Bowie title song, “Putting Out Fire”, is an all-time classic and was recently used by Quentin Tarantino during a memorable sequence in Inglourious Basterds. Incidentally, Natassja Kinski was originally slated to play the role Bridget von Hammersmark in that film, but it fell through, so using the theme from Cat People might have been Tarantino’s way of paying tribute to her. But even though I said that Cat People works better as a piece of erotica than as a horror movie, that shouldn’t discourage horror fans from seeing it since the film features a lot memorable set pieces and first-rate makeup effects. The gory scene where the leopard rips the arm out of the socket of a zookeeper (played by Ed Begley Jr., of all people!) is guaranteed to make even the most hardcore horror fan cringe. All in all, Cat People remains a strange anomaly in the horror genre that will forever divide fans and is certainly not to everyone’s taste. However, those in the mood for something very different and unique are advised to check it out, and if nothing else, this remains one of the more ambitious remakes ever made. Yep, I guess you can call this another “Passing the Cactus” movie for me.