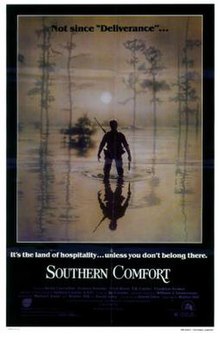 Over the past few decades, one of the most consistent action directors out there has been Walter Hill. He is a filmmaker with no pretensions who only cares about entertaining his audience. None of his films are masterpieces of plot and characterization, but they are usually very well-crafted and can sure be entertaining. He helped popularize the buddy cop film with Nick Nolte and Eddie Murphy in 48 HRS., and did a fun job of replicating the formula with Arnold Schwarzenegger and James Belushi in Red Heat. I have previously covered his 1978 film, The Driver, which was an obvious inspiration for last year s acclaimed neo-noir action flick, Drive, and has often made people debate whether it was a piece of existentialism or just a no-frills excuse for Hill produce great car chases. Of course, the film that really put Walter Hill on the map was the cult classic, The Warriors. It told a very simple story about a New York City street gang trying to make it back to their home turf in Coney Island while being pursued by many other rival gangs, but it told its story with great style and energy. Hill would replicate that formula with his 1981 effort, Southern Comfort, which is one his most accomplished, but underrated films. It tells a similar story to The Warriors about a group of people trying to make their way through unfamiliar territory while a dangerous enemy tries to kill them. In fact, given the film’s rural setting, you could even call it “The Warriors meets Deliverance“. There are no big revelations in this story and none of the characterizations are a pillar of great depth and subtlety. But Southern Comfort is still very entertaining, extremely well-made which often catches you off-guard with the amount of tension it manages to generate.

The story takes place in 1973 in the bayou swamps of Louisiana, where a group of nine National Guardsmen are planning to do a routine weekend training exercise. The two main protagonists are Spencer (Keith Carradine), who appears to be the most level-headed soldier in the group, and a cynic named Hardin (Powers Boothe), who has just been transferred in from Texas. The squad is led by Sgt. Poole (Peter Coyote), the only soldier who seems to have legitimate combat experience. Other members of the group include the hot-headed Reece (Fred Ward), the irresponsible Stuckey (Lewis Smith) and the ineffectual Casper (Les Lannom), along with Cribbs (T.K. Carter), Simms (Franklyn Seales) and Bowden (NFL-star-turned-politician Alan Autry, going under the pseudonym “Carlos Brown” here). For their training exercise, their rifles will only be loaded with blanks, though Reece sneaks along some live ammunition with him. While in the swamp, the squad takes a wrong turn and arrive at a body of water where they realize that their only option for getting across is to steal a nearby group of canoes. Poole reluctantly agrees for the squad to take the canoes, but while they are paddling through the water, the Cajun hunters who own those canoes suddenly appear out of the bushes. Stuckey responds by using his rifle to fire blanks at them as a prank. Things get real serious real fast, however, when the Cajuns respond by firing a bullet directly into Poole s head! The squad starts to panic and after making it ashore, they realize that their lives are in danger and they are now in a situation where they’re in way over their heads.

The remaining eight squad members find themselves lost in the Louisiana swamps with only a handful of live ammo to protect them against their Cajun assailants. Casper assumes Poole s command and wants to follow proper military protocol to lead them back to civilization, but it’s obvious that he is very unqualified for the job and that Spencer would make a much better leader. They soon come across a shack and find a one-armed, French-speaking Cajun trapper (Brion James), who may or may not been involved in Poole’s murder. Even though they’re not sure of his involvement, Casper insists that the squad take the trapper back with them as prisoner. As they continue their trek through the swamp, they soon encounter a series of booby traps and it becomes obvious that the Cajuns are going to toy with the squad before picking them off, one-by-one. Southern Comfort has often been seen as a metaphor for the Vietnam War and the fact that the story takes place in 1973 (the same year that U.S. forces withdrew from the conflict) would seem to confirm that. Like many situations from Vietnam, a group of inexperienced American soldiers are put into an armed conflict against combatants who may be technologically inferior, but are so committed to protecting their home turf that the soldiers are doomed. Walter Hill has always denied that he ever intended to make Southern Comfort as a Vietnam parable and just seemed content with making a straightforward standalone action film. Well, even if that was his only goal, Southern Comfort is still a very good straightforward standalone action film which does a marvelous job at generating tension. When the action finally leaves the swamp, the movie actually manages to become even MORE tense during a masterful climax set in a Cajun village. In this sequence, upbeat Cajun music provides a sharp contrast to the sight of animals being slaughtered and helps build a growing sense of paranoia that the soldiers are being set up for their own slaughter.

In the end, Southern Comfort is so well-crafted that it ultimately doesn’t matter whether it is a film of great depth or just a brainless action picture. Many of the characters here may not be three-dimensional, but they are fun to watch and very well-acted. At the time this was released, Keith Carradine was pretty much the only well-known member of the cast, but Southern Comfort provided early roles for some of the industry’s most prominent character actors, including Powers Boothe, Fred Ward, Brion James and Peter Coyote. The Louisiana bayou makes for a great setting in this film and comes across as a very ominous, miserable place while Ry Cooder enhances things with a terrific atmospheric guitar score. Hill wisely keeps the Cajun antagonists off-screen most of the time and never provides the audience with a clear glimpse of them, which only makes them a more terrifying threat and leaves you in a constant state of unease about when they are going to strike. The film also features an ambiguous ending which may never have been intended to be ambiguous, but has still been widely debated amongst audiences. While the ending could very well be construed as an upbeat one, Hill does a great job at leaving the viewer uncomfortable and uncertain for as long as possible. That’s one of the most interesting aspects of Southern Comfort: it may never have been intended to be anything more than a popcorn action flick, but viewers can still INTERPRET the film as something more. Because he is primarily an action director, Walter Hill will probably never be looked upon as a great artist, but there’s something to be said about the great skill it takes to assemble superior action films like Southern Comfort. While 48 HRS. and The Warriors are considered to be Hill’s greatest films, Southern Comfort is an underappreciated work that deserves to be ranked right alongside them.