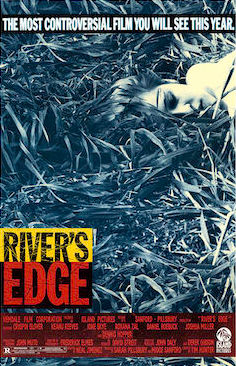 A few days ago, we recorded a Shouts From the Back Row podcast about the career of Keanu Reeves. Of course, the role which really put him on the map was Ted “Theodore” Logan in Bill & Ted’s Excellent Adventure, but we pondered whether the image of this iconic dim-witted California metalhead clouded the more serious roles Reeves played later on his career. However, many people forget that the role which first made people take note of Keanu Reeves was in an underrated teen drama called River’s Edge, which came out three years before Bill & Ted. Even though Reeves was also playing a rather aimless dim-witted stoner character, the subject matter here was much more morbid: how would a person like this react if he discovered that if one of his friends had committed murder? During virtually every era, the older generation often loves to complain about how the youth of today have no values and are becoming more and more desensitized. Most of the time, their complaints are greatly exaggerated, but sometimes, a horrifying incident will come to light in which these concerns ring true. Years before this film’s release, the media covered the shocking story of a group of high school students who refused to go the police after finding out that one of their friends had killed someone. Screenwriter Neal Jiminez decided to use this real-life incident as the basis for a script called River’s Edge. The end result is a harrowing portrayal of disaffected youth which still holds true today.

River’s Edge opens with the sight of a dead teenage girl named Jamie, whose nude body is lying on the edge of a river in a small town. Sitting next to Jamie’s body is her teenage killer, Samson Tollet (Daniel Roebuck), who is nicknamed “John” by his friends simply because his last name sounds like “toilet”. It’s soon revealed that Samson and Jamie were members of the same clique of high school students. Samson’s closest friends appear to be a high-strung, frenetic drug user named Layne (Crispin Glover) and an aimless stoner named Matt (Keanu Reeves). Matt hails from a broken home and lives with a clueless mother who doesn’t care if her son smokes dope, an asshole stepfather, and a disturbed 12-year old brother named Tim (Joshua Miller), who discovers Jamie’s dead body while sadistically throwing his younger sister’s doll into the river. However, Jamie’s murder does not stay a secret for very long as Samson flat-out tells his friends that he killed her because she insulted his deceased mother. At first, they all think Samson is joking until he takes them to the river to show them Jamie’s body. Even though Jamie was their friend, most of teens from this clique (even the other females) seem relatively unphased by the crime and take a pact not to tell anyone what happened. Matt is the only one to become overwhelmed with guilt, so he decides to go to the police. When Jamie’s body is discovered and Samson becomes a wanted man, Layne helps his friend hide out with a local dope dealer named Feck (Dennis Hopper), a strung-out former biker who is also wanted by the police for murdering a woman many years earlier.

The real-life incident which inspired River’s Edge occurred on November 3, 1981 in Milpitas, California, where 14-year old Marcy Renee Conrad was raped and strangled to death by 16-year old Anthony Jacques Broussard. The most shocking aspect of this story was not the murder itself, but the fact that Broussard took at least ten of his teenage friends to see the victim’s body, but no one bothered to tell the police for two days. None of the teens could offer a rational explanation for their actions, other than they did not want to get in trouble. Indeed, the most shocking element of River’s Edge is that Samson’s friends act like ratting him out to the police for murder would be a worse sin than the murder itself. Even though Jamie is also a friend of theirs and the killing was completely senseless, Layne brushes the whole thing off by flat-out stating that Samson had his reasons. When Matt finally does the right thing and reports the crime to the police, his biggest concern is how his friends are going to react when they find out about his “snitching”. One of the most frightening characters in the film is Tim, who is already a drug user at age 12 and seems like a burgeoning psychopath himself. Even though Tim has no real connection to Samson and his clique, he acts like Matt’s decision to inform the police is the worst betrayal ever and it becomes apparent that he would have no qualms about killing his own brother for this. While the performances in River’s Edge are excellent all around, Crispin Glover pretty much steals the movie with his high-energy portrayal of Layne, who decides to go above and beyond the call of duty to protect his murderous friend.

Layne is such a fascinating character because he seems to have a major emotional investment in covering up the crime. Sampson is less-than-enthused about getting away with his murder and it’s pretty obvious that he wants to get caught, but Layne finds the whole adventure to be a major adrenaline rush. Indeed, one of the more interesting elements of River’s Edge is figuring out how much of the real actor’s persona is embodied in their characters. It was while promoting River’s Edge that Crispin Glover made his infamous whacked-out appearance on Late Night with David Letterman, which made everyone aware that there was something off about the guy. Dennis Hopper is the absolute perfect casting choice for the role of Feck. It’s no secret that Hopper went through many years of substance abuse and erratic behaviour, and came very close to ruining his life and career. But in 1986, Hopper came back with a vengeance with memorable performances in Blue Velvet, Hoosiers and River’s Edge, and there are many elements of truth in his portrayal of the burnt-out Feck. Joshua Miller’s performance as the mentally unbalanced Tim is also fascinating to observe. Miller was a fairly prominent child actor during the 1980s, but eventually got out of the business after becoming a teenage heroin addict. River’s Edge is a harrowing look at how rampant substance use and parental indifference can turn teenagers into morally bankrupt individuals who will not even let themselves be phased by a friend’s murder. River’s Edge is not subtle about its messages and does get a little heavy-handed at times, but it’s still a powerful, unforgettable experience. Given the amount of shocking teenage crimes which have been committed in the 28 years since it was released, the film is now more resonant than ever.