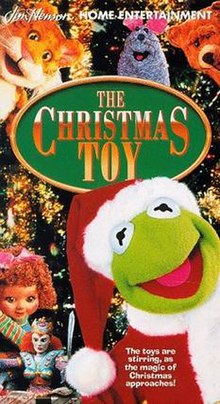 Christmas is only a few days away and it’s a given that everyone is going to be tuning into the usual televised holiday specials such as Rudolph the Red-Nosed Reindeer, Frosty the Snowman and A Charlie Brown Christmas. So I think it’s only appropriate that I deviate a bit from my usual “Robin’s Underrated Gems” format and cover a Christmas television special which I feel is underrated. Growing up as a kid during the 1980s, there were a few Christmas specials which I considered to be personal favourites, but have wound up fading into obscurity. One of these was called The Christmas Toy and it’s somewhat surprising that it didn’t become a more iconic Christmas special, considering that it was a creation of the late, great Jim Henson. It aired on ABC on December 6, 1986 and I can still remember the hype for it. Of course, a lot of the advertising featured Kermit the Frog, but he would only make a brief cameo as the host of the special and the story would feature an all-new set of characters. The Christmas Toy isn’t particularly well known today, but it is notable for bearing some striking similarities to a very famous animated film released by Pixar nine years later. In fact, the very first entry on the very first article I wrote for Cracked.com focused on these striking similarities. However, The Christmas Toy still holds up as a pretty fun holiday special on its own.

As introduced by Kermit the Frog, the world of The Christmas Toy is set in the home of the Jones family and much of the action takes place inside their playroom. When no humans are around, all the toys in the playroom magically come to life. The main character is Rugby the Tiger, who was given to the Jones daughter, Jamie, for Christmas the previous year and became her favourite toy. Other characters in the playroom include Apple the Doll, who used to be Jamie’s favourite toy before Rugby came along, and Rugby’s friend, Mew the Mouse, who happens to be the family cat’s favourite toy. It is now Christmas Eve and since the Jones children are going to be receiving new presents, the toys in the playroom are prepared to welcome some new friends. However, Rugby grows very insecure over the idea of Jamie receiving a new toy which will supplant him as her favourite. Rugby doesn’t quite understand how Christmas works, so he concocts a plan to sneak into the box containing Jamie’s newest toy. Rugby’s logic is that when she opens her present on Christmas morning, he will become her favourite toy all over again.

However, there’s a rather creepy reason the toys have to remain in the playroom and can only come alive when humans are not around: if the humans catch a toy moving or find them in a place they’re not supposed to be, they will be frozen forever. Therefore, Rugby is taking a huge risk by sneaking out of the playroom, walking downstairs to the Christmas tree and placing himself inside Jamie’s present. Yes, I’m sure you’ve figured out by now that The Christmas Toy seems to share a lot in common with a little film called Toy Story. Rugby’s character arc rivals that of Sheriff Woody, a doll who is very unhappy about his owner receiving a new toy which replaces him as the favourite. As if this similarity wasn’t enough, the new Christmas present Jamie receives is Meteora, Queen of the Asteroids, an arrogant space-oriented doll who does not understand that she is just a toy. In other words, a female version of Buzz Lightyear.

I’m sure anyone who watched The Christmas Toy as a child was probably taken aback by the whole “toys are frozen forever” angle. Early in the special, there’s a scene where a toy clown slips out of the playroom, is spotted by the family, and is left frozen in place forever while the toys mourn him. Near the end, the exact same thing happens to Mew the Mouse. It’s about the closest a children’s story can come to depicting the death of a toy, but it’s pretty poignant and mature stuff and an interesting way to broach the themes of loss and death for its younger audience. In spite of some of its darker elements, The Christmas Toy is still a very enjoyable special that lives up to the rest of the work by the Jim Henson Company. The visuals are terrific, the songs are catchy, and the characters are entertaining. The two main performers here are Dave Goelz, who portrays Rugby, and Steve Whitmire, who portrays Mew, and they both do first-rate jobs. Of course, Goelz is best known for being The Great Gonzo and Whitmire best known for being Rizzo the Rat, and you can see elements of both those characters in their portrayals of Rugby and Mew. Jim Henson himself pretty much takes a backseat here, aside from his cameo as Kermit.

The Christmas Toy was released on home video during the 1990s and finally got a DVD release in 2008, but sadly, the preceding sequence with Kermit had to be cut out because of rights issues. The characters from The Christmas Toy returned to the small screen in 1994 for a Disney Channel series called The Secret Life of Toys, but it only lasted thirteen episodes. Other than that, however, The Christmas Toy pretty much faded into obscurity and is one of the lesser known productions from The Jim Henson Company. But the special does have a cult following and demands rediscovery, particularly since Pixar was obviously inspired by it and borrowed numerous plot elements when they made Toy Story. This Christmas season, if you’re burned out by all the usual holiday stuff repeatedly airing on television and are inclined to try something different, you might want to seek out a copy of The Christmas Toy.