Only a week away from the release of the new sequel reboot of the Vacation series on July 29th and now would be the apt time to revisit the zeitgeist when Chevy Chase was a comedy demigod.

It might be hard to believe for anyone under 30 but Chevy Chase was the first breakout star from Saturday Night Live. Now he is mired in temperamental controversy with his resignation from Community but he was only on SNL for the maiden season before he embarked on a lucrative film career. His early film success spawned three undisputed comedy classics- Caddyshack, Fletch and National Lampoon’s Vacation.

With the training wheels removed after Caddyshack, Harold Ramis is more polished in his handling of Vacation. No more coming-of-age subplots or unnecessary deviations but some gags lose their luster from repetition (Brinkley cameo, the Holiday Road anthem, etc.). John Hughes’ hospitable, gradually gut-busting script firmly revolves around the Griswold family and their patriarch Clark’s (Chase) rhapsody to have a cross-country adventure en route to the Wally World amusement park. 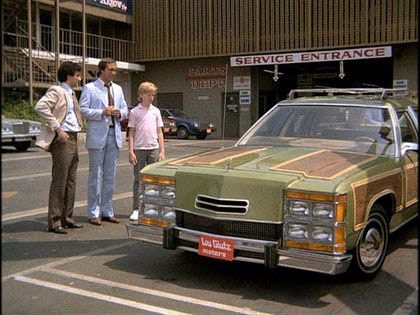 It’s an understatement that Chase is flawless as the overzealous father Clark. His desperation to provide ecumenical fun to his entire family is congenial and adds a warmth to the normally aloof Chase who usually rises above his stark situations with sardonic asides ala Fletch. He is elated and optimistic over the simplest of mundane rituals – the car trade-in. His Mr. Magoo double-take over his flattened former vehicle is rib-tickling.

The farcical elements of Vacation are a springboard for Murphy’s Law (“Nothing worthwhile is easy”). Despite the contrivances, Vacation is teeming with relatable scenarios of travel (the discordant singalongs, the Augean motels, sightseeing, etc.) and wry Walt Disney satire. Once Clark’s frangible exterior is dispirited by the misadventures, the glint of unhinged mania in Chase’s one-track demeanor is fabulously funny.

Sometimes, the humor is delectably politically incorrect such as when the Griswolds detour through an urban neighborhood that is crime-ridden (Clark’s stab at slang “What it is homes?”), Clark’s adulterous flirtation with the Girl in the Red Ferrari (Christie Brinkley) and an inopportune roof shrine for the deceased Aunt Edna (Imogene Coca). Midway through the film, we are introduced to the recurring character of Cousin Eddie and Randy Quaid is a supremely uncouth foil for Clark insofar as he is not the bread-winner, his mutated gene pool is inbred (one of his daughter was born without a tongue) and routinely supplicates for astronomical loans.

In the pantheon of Chevy Chase pictures, the identifiably hilarious, sprawling Vacation ranks among the best and his knack with slapstick is nonpareil (his scolding of his children with his wife, Ellen’s (Beverly D’Angelo) panties wrapped around his index finger). It has withstood the test of time because everyone can empathize with Clark’s idealistic purview of a generational bonding experience.