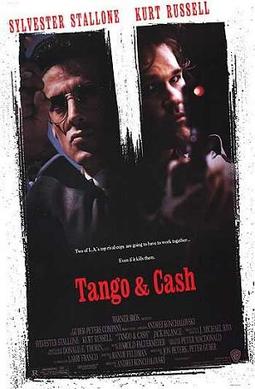 It s amazing to think that it’s now been two years since The Back Row was launched. The second Shouts from the Back Row podcast we recorded was for the release of The Expendables, and around the same time, I decided to do a “Robin’s Underrated Gems” column on the Sylvester Stallone action flick, Nighthawks. Well, here we are two years later and The Expendables 2 has just come out in theatres, so I think that another underrated Stallone gem needs the spotlight. In other words, it’s about time that Tango & Cash finally got the respect it deserves. And, yes, I know that statement is probably going to make some people question my sanity. Sylvester Stallone made a plethora of flops in the late eighties and early nineties, and Tango & Cash is often listed among them. While the film did well at the box office, it was trashed by critics, garnered three Razzie nominations, and had quite the chaotic production history. Renowned Russian director Andrei Konchalovsky (who had previously made the acclaimed Runaway Train) was hired for make Tango & Cash, but was replaced before the end of production with Albert Magnoli after running way over-budget and having numerous disagreements with producer Jon Peters. When the studio was unhappy with the original cut of the film, editor Stuart Baird had to be brought in as an editing “doctor” in order to salvage the project. One cannot deny that Tango & Cash is a bit of a mess and, of course, it follows the same formula which was covered by dozens of other buddy cop movies from this time period. Yet, in spite of its problems, Tango & Cash is still a great deal of fun, due largely to the surprisingly great chemistry between Sylvester Stallone and Kurt Russell.

Of course, you can probably already guess the scenario by now. Ray Tango (Sylvester Stallone) is a clean-cut, high-class narcotics cop from a fancy police station in Beverly Hills who wears expensive suits and is always talking to his stockbroker. Gabriel Cash (Kurt Russell) is a grungy, low-class narcotics cop from a crappy police station on the other side of town who sports a mullet and wears cheap torn sweatshirts on the job. However, in spite of being polar opposites, they are both the two best narcotics cops in Los Angeles, and have done a lot of damage to an organization run by a drug kingpin named Yves Perret (Jack Palance). Perret decides that the best solution to his problem is not to kill Tango and Cash, but to disgrace them and tarnish their good names. Perret devises a complicated set-up where Tango and Cash both wind up arriving at scene where an undercover federal agent has been killed, and the two cops are framed for his murder and sent to prison. Even though they don t particular like each other, Tango and Cash are forced to put their differences aside and work together in order to escape from prison, clear their names and take down the evil Perret. In terms of ridiculously complicated movie villain schemes, Yves Perret’s plan has to rank right near the very top. It’s understandable that he wouldn’t want to make martyrs out of Tango and Cash by killing them, but he probably could have thought of something simpler than bribing a shitload of people to frame them for murder and have them transferred to a maximum-security facility, where the convicts will kidnap the two cops from their cells and bring them to the laundry room for a needlessly prolonged death scene. Surely it’s an unnecessary risk for Perret and his henchman Requin (Brion James) to go to the trouble of actually breaking into the prison just to watch Tango and Cash get killed!

It s rumoured that Tango & Cash went into production without a completed script, and that would explain why the plot often makes little sense. The constant fights between Andrei Konchalovsky and Jon Peters were due largely to the fact that Konchalovsky wanted to make a straightforward police thriller while Peters wanted the project to be more of a spoof. Even though Jon Peters’ sanity has often been brought into question throughout his career (particularly in Kevin Smith’s infamous “Superman and the giant spider” story), his philosophy might have been the correct one here since Tango & Cash does work a lot better if you view it as a parody of buddy cop action films. Even if his script wasn’t finished when production began, screenwriter Randy Feldman still provides a lot of genuinely witty dialogue and delightfully cheesy one-liners. The back-and-forth exchanges between Tango and Cash are actually quite hilarious and quotable, and work because Sylvester Stallone and Kurt Russell have pretty good chemistry together. At this point in his career, Stallone had been playing so many serious, monosyllabic roles that it was a refreshing change to play an action hero with a sense of humour. From his opening scene where he exclaims “Rambo is a pussy”, Stallone has fun lampooning his own screen image and plays the material with surprisingly good comedic timing. While Kurt Russell was not the original choice to play Cash (he took the part after Patrick Swayze dropped out), it was a tailor-made role for him and his banter with Stallone holds the film together when the massive plot holes start forming. It’s a shame that Stallone and Russell have never had the chance to work together again, and I feel that the presence of Kurt Russell is the only thing missing from The Expendables 2.

Whether or not Tango & Cash was intended to be a parody, it never takes itself seriously and provides an entertaining gallery of colourful supporting characters. Even though Yves Perret is one of the dumbest, most illogical bad guys in cinema history, he s still a fun villain since Jack Palance does not hesitate to camp it up and completely chew the scenery. Brion James also camps its up as Requin, speaking in a godawful Cockney accent and using words like “bloke” and “guv’nor”, but he’s also entertaining to watch. Other colourful bad guys include large-chinned B-movie villain Robert Z’Dar (best known for the Maniac Cop films) as a convict who wants revenge on Tango and Cash, and Clint Howard as Tango’s psychotic, Slinky-loving cellmate. Michael J. Pollard also pops up in a bizarre random role as a “Q”-esque gadget-maker who supplies Tango and Cash with a high-tech SUV assault vehicle for the big climax. I have no idea which portions of the film Andrei Konchalovsky actually directed before he was fired, but he does keep things moving at a fast pace, and delivers plenty of exciting action scenes, particularly the sequence where Tango and Cash make their daring escape from prison. There’s a test I always like to use to evaluate buddy cop films. Even if the film is completely formulaic, they will pass my test if they contain these three elements: genuine wit, good action scenes, and terrific chemistry between the two stars. In my opinion, Tango & Cash does have all three of these things. It may be a mess, but it’s a very entertaining mess which delivers the goods for action fans and contains a lot of genuine laughs. It does not deserve to be ranked amongst Sylvester Stallone’s biggest flops and remains one of his most underrated films.

As a footnote, here is a side-by-side comparison between the opening scene of Tango & Cash and a chase sequence from Jackie Chan’s Hong Kong film, Police Story. At the time Tango & Cash was made, Jackie Chan was not yet a huge star in North America and not many people had seen his films, so Stallone decided to, um, “borrow” one of his gags from Police Story. Like Reservoir Dogs and City on Fire, nobody noticed the similarities until many years later.